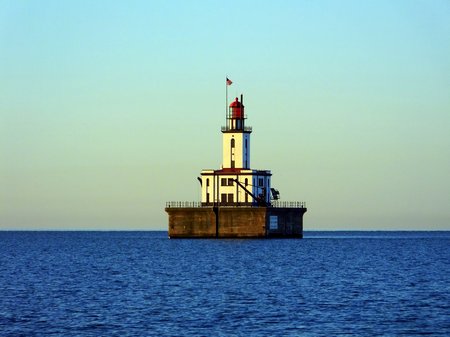 We’re off early for the final run of our trip. I ease our way out of the marina and head south, toward the open water of western Lake Huron. Just before we leave, a large lake freighter passes down the channel. We must be on the route between Lake Huron and Lake Superior. Once out on open waters I turn west. The water is glassy smooth, and I decide that, since we have plenty of gas, it would be a good time for our boat to act like the MacGregor 26X Powersailer she is. I open the ballast valve and air plug, and we power up. As the 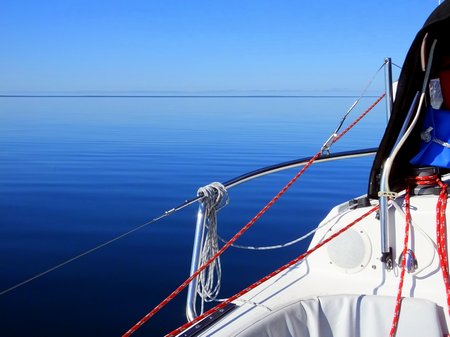 bow rises, the ballast water we’ve been hauling around with us ever since leaving Norfolk VA quickly drains out. Soon we’re booming along at full throttle, leaving a spreading wake behind us. On this smooth water, it’s amazing to be able to see our wake stretch out virtually to the eastern horizon. Our speed hits 11.5 mph, and then improves to 12. As we near Macinac Island we start tickling 13, and after we pass by the island, we’re running steadily at 13 mph, a record speed for the trip.

Because of the urgency in our pace, we aren’t able to stop at Macinac Island. We visited there 45 years ago, and I figure the important, scenic stuff like the old fort, grand hotel, and horses and buggies haven’t changed much. So, we don’t feel particularly disappointed in not being able to visit once again. This feeling is reinforced by one change that we do note. A great deal of condo construction has taken place along the waterfront, on the west side of the boat basin. They aren’t particularly distasteful, but they certainly don’t add to the scenic quality either. We also note the steady parade of high speed tour boats hauling tourists out to the island from Macinac City and St. Ignace. I’m certain that tourist volume is way up, compared with 1971. We take lots of pictures of the island and its major structures as we pass by. We also don’t neglect the majestic Big 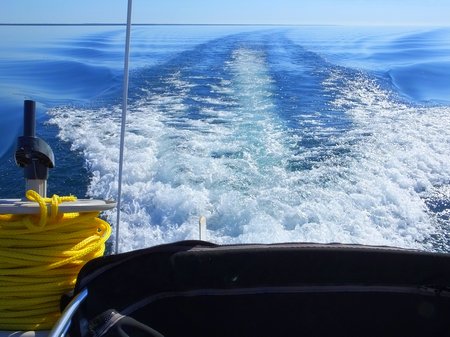 Mac Bridge, which connects Michigan’s Lower and Upper Penninsulas. This great suspension bridge was completed in 1957. Prior to its completion, traffic would stack up for miles and hours, waiting for the ferry during high demand times like summer and the opening of fishing and hunting seasons.

Shortly before noon we enter the Macinac City Municipal Marina boat basin, and take our final slip. After nearly a year on the water, it feels strange and somewhat bittersweet to know that our voyage is coming to its end. Once we’re tied up in our slip, I get our gold Loop flag out and raise it on the halyard. This flag signifies crossing one’s wake on a Loop cruise. Although we haven’t actually made it back to our starting point on the water, I figure that, after 6,421 water miles we’ve earned the right. We will cross our path on the boat trailer, completing our loop, and certainly, the medical and family circumstances count for something. Actually, the technicality of a gold loop flag really don’t amount to the motivation for this undertaking. All the sights, experiences, and people met along the way are the true reward.

I originally figured we’d arrive several hours later, and would just have enough time to round up a rental car. This plan would call for us to drive town to Grand Haven tomorrow, and hopefully drive back here late in the day. Because we’ve arrived so early, we have time to get the rental car and make the drive south today. I opt to do a one way rental, picking the car up at the local airport. We take a taxi out to the airport and then hit the road. We get to

our friends’ house by 5:30 pm, and it’s a joyful reunion. They’ve gotten the truck’s oil changed, and have hitched the truck and boat up for us. We learn that wasps built a nest in the surge brake coupler, resulting in a sting during the hitching process. Hopefully they’re all gone now. I also learn that our friend couldn’t get the trailer lights to come on. I’ll work on that in the morning. Our friend is a local policeman, and in the event that I can’t get them working, he writes me up a warning citation for defective equipment. He says that will get me past any stop by law enforcement here in Michigan. After that, I will be on my own. I hope I can get those darned lights working.

We all go out for dinner together, telling stories and enjoying each other’s company. It’s nice to sleep in a regular bed once again. Tomorrow will be a busy day. 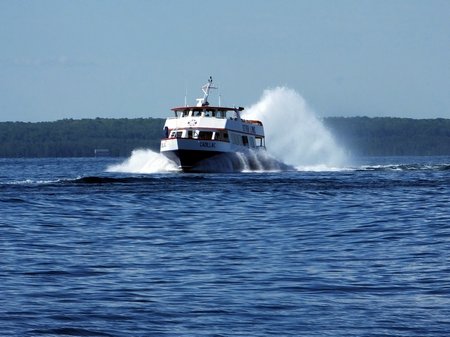 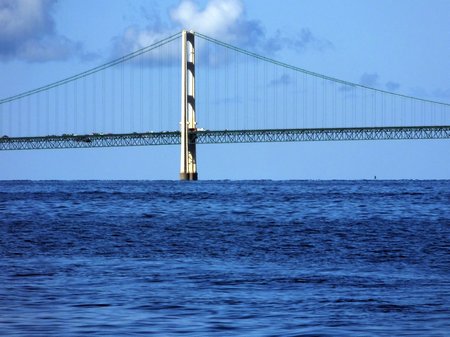 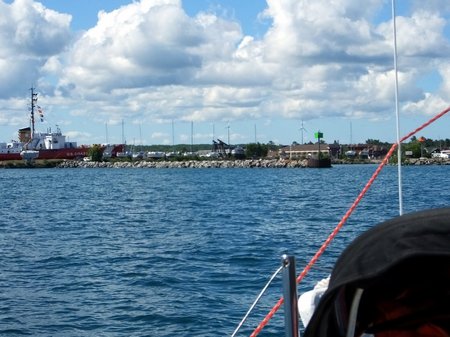 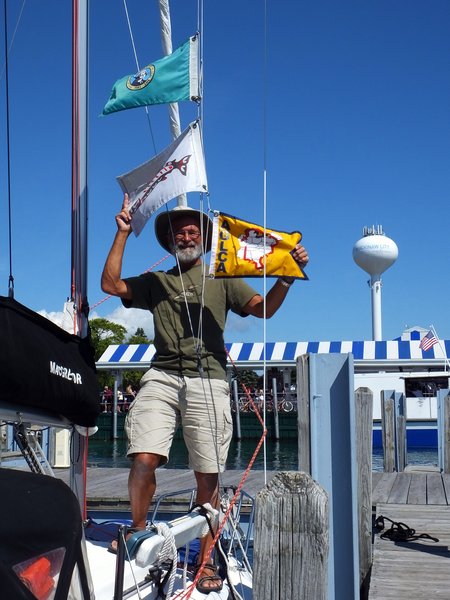