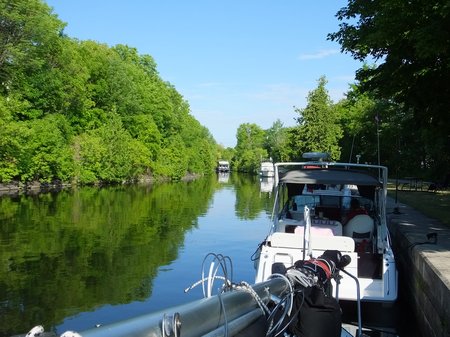 Heavy dew in the cockpit this morning, and clear, sunny skies to start the day. We follow a narrow channel lined with dense trees and shrubs, but soon cruise out onto the Kawartha Lakes. This is a lovely region of substantial lakes, connected by channels and occasional locks. We’re now crossing into the vast Canadian Shield, a geologic province characterized by massive granite formations which were scoured by the ice age glaciers. Pink granite dominates the landscape, outcropping as bare rock in many places, covered by thin soils in 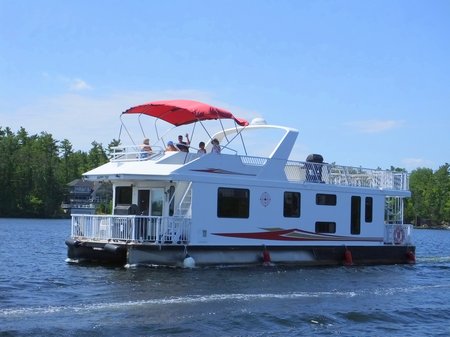 others. The lakes are dotted with small rocky islands, beautiful but hazardous to passing boats. One does well to heed the channel markers, and you stray beyond the red and green buoys at your peril, since massive slabs of hard granite lurk in many places, just inches below the surface. We take our time today, stopping just above Youngs Point Lock to visit the country store located there. This place is quite well known, and has an attractive array of furniture, furnishings, clothing, souveniers, and miscellaneous items. Even though it’s barely 10am, I can’t resist ordering up a milkshake. Sandy comes away with a comfortable top. A little past Youngs Point we weave our way through Hells Gate, an intricate passage between scattered granite islands and outcrops. We’re grateful that the route is well marked. Our next stop is at Burleigh Falls Lock, where we tie up above the lock for lunch. It’s turning into another very warm day, and we’re thankful for the little bit of shade we find on the starboard side, above the lock. While there a large rental houseboat approaches the lock wall just behind us. I get up to help them with their lines. It’s a little scary watching novices attempt to drive these boats. They catch a lot of wind, and are seriously underpowered. The lack of operator skill is often apparent. In this case, the driver jams the bow corner, port side, into the lock wall while I’m trying to get their bow line secured. Then, the stern line gets tossed to me but falls several feet short and 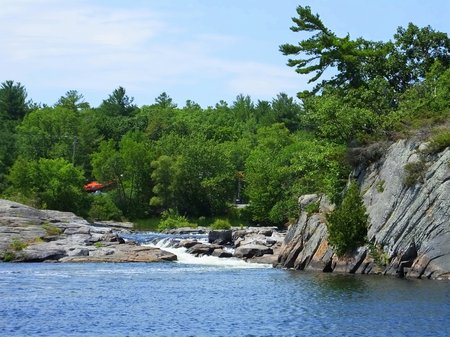 drops into the water. On second try it smacks me in the face, while the big houseboat slams into the wall. Not a single fender is out. The aluminum gunnels of this vessel testify to numerous rough landings. The crew seem to be enjoying themselves, though. I can just hope that we never find ourselves in their way when they’re struggling for control.

We lock through at Lovesick, a pretty place which is supposedly named for an Indian boy whose affection was spurned by a red haired Irish girl. While out on Lovesick Lake I’m motoring along, in a stiff breeze when the boat does an abrupt Crazy Ivan (if you’ve seen the movie Hunt for Red October you know what I mean). The boat immediately turns to starboard and refuses to answer the wheel. We’re 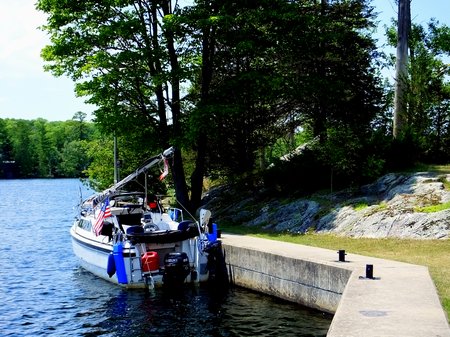 out of control. I cut the throttle and confirm that the outboard and rudders are no longer linked to the steering. A quick glance around confirms that we’re out in the middle of big water, with no obvious obstacles nearby. I lift the steering seat and spot the offending pin and ring lying in the motor well. This pin connects the steering rod with the rudder and motor linkage arms. After a bit of gymnastics and effort I’m able to reinsert the pin and stuff the ring back into the hole at the end of the pin. The ring has become bent so that it no longer reliably keeps the pin in place. I’m counting on a temporary fix for the last 4 miles, until we get through the Buckhorn Lock and tie up at the mooring wall. Once there I’ll get a new longer pin out, along with a good ring ding, and fix it properly.

I round the corner just below the lock and see the lock doors opening. Several boats begin to exit while I circle in the approach bay, hoping my steering will hold together long enough to get through the lock. I’m beginning to line up with the lock entrance as the final boat, a very large trawler, begins to pull out. Just before I get to the lock channel entrance this trawler starts to turn right across my path. I can’t believe it. I pull back on the throttle to avoid a collision as he completes a U turn right in front of me and heads for an open mooring wall spot on the port side. While this is going on the lock doors start to close. I give the lock attendants a blast with my air horn. Meanwhile the trawler driver tells me that the lock wall is full of moored boats above the lock. It now dawns on me that he feared I was heading to the spot where he plans to moor, and he wanted to cut me off so he could get there first. Nice guy. The lock attendants reopen the gates and let me in. I ask them if I can tie up on the blue line after the lock closes, and they say fine, after 5:30. I figure I’ll need to anchor out until then. After leaving the lock, though, I spot a short little stretch of wall on the port side which looks just big enough for us. I turn around and approach. The owner of the boat at the back of this space comes down to the wall and helps us with lines. We get in just fine, and are nicely tied up there, with just a foot or two to spare in front and behind the boat. We’re pleased to be here. I pull out my spare parts kit and find a good pin and ring, and soon have the steering linkage properly repaired. We get acquainted with the people in the boat behind us. Nice retired folks, former long haul truckers (both husband and wife teamed up to drive). We talk politics and find ourselves agreeing on many things. I take a quick cooling dip in the water before dinner. We’ll go for an evening walk in search of ice cream before settling in for the evening. 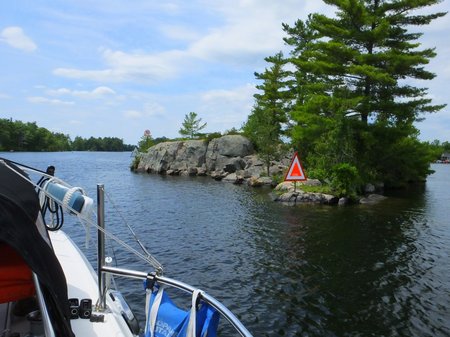 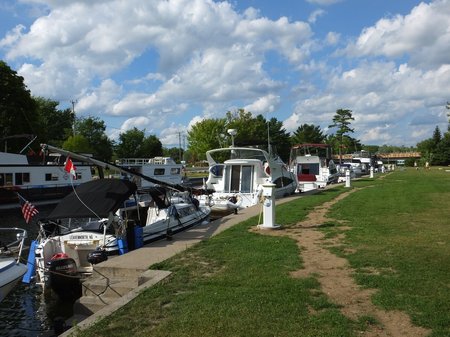