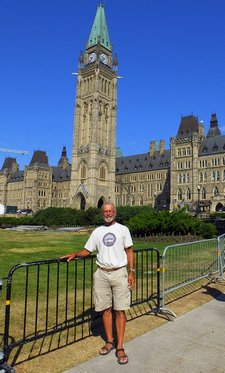 Big day of touring ahead. We hit the street in the direction of Parliament shortly after 8am. Tours of Parliament are free, but the demand for tickets is high, and we must stand in line for our reserved tour tickets. We reach the ticket office by 8:15 and the line has already formed. The doors don’t open until 9am, so there’s plenty of time to chat with other folks in line. The tour is well worth while, though. Canada’s Parliament buildings are remarkable in their detail and beauty, and so very different from our US Capitol. Intricate carvings in wood and stone adorn every possible surface, and they’re rich in symbolism and meaning. Our tour takes us through the House of Commons and the Senate Chamber, as well as the very ornate Parliament Library, the only portion of Parliament to survive the disastrous 1916 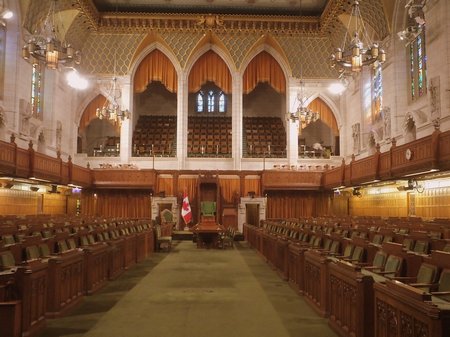 fire, which totally destroyed the rest of the structure. The only thing that saved the library was insistence of the librarian at the time of construction that the library be fitted with iron fire proof doors, and a heroic individual managed to rush over and shut them just in time, after the fire broke out. We are also take up to the top of the Peace Tower, where the carillon bells and great clock are installed. The final stop on our tour is the Memorial Chamber. This chamber, located within the Peace Tower, is a deeply moving place, dedicated to remembering all who have given their lives on behalf of Canada. It was created in the immediate aftermath of the First World War, a conflict in which more than 66,000 Canadians gave their lives. This tragic toll becomes even more significant when one considers that this figure represented fully 1 percent of Canada’s total population at the time. If the US were to lose a comparable number based on today’s population, it would involve the deaths of some 3 million soldiers. A set of remembrance volumes have been created, with the name of every soul lost hand written in them. Each day a page in one of the volumes is turned.

Following our Parliament tour we grab a quick lunch before hopping on our tour bus for our ride over to the Museum of History. This is the most popular museum in all of Canada, and 5 hours after we enter, we can easily attest to its popularity. The architecture of the building alone is magnificent, and the exhibits, which focus largely on the stories, culture and artifacts of Canada’s aboriginal people are fascinating. Even in 5 hours, it’s almost too much to take in. We try to manage our time, but it’s difficult. Midway through our tour we take a break and watch a 3D Imax type film on wild Africa. 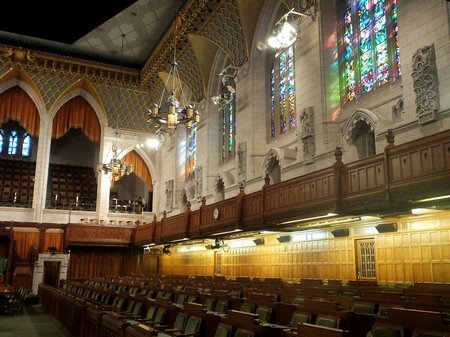 After the film we walk through two special exhibits. The first features Canada’s gold rush, which hit British Columbia in 1858. We’re familiar with this story, since people headed for this gold rush passed through our home territory. We’ve also visited some of the sites of the gold rush up in BC. The second special exhibit is on Napolean Bonaparte, and includes a remarkable collection of artifacts associated with the great emperor, on loal to Canada from France. Such artifacts as Napolean’s throne, ceremonial breastplate, camp tent and bed, 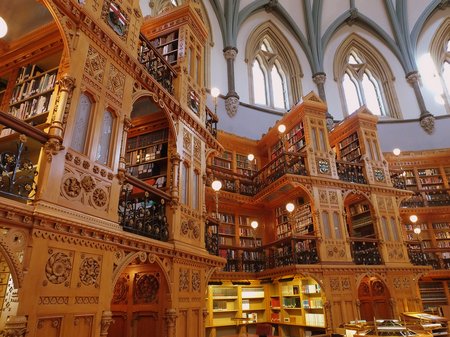 and death mask are on display.

By 5pm we’re about museumed out, so we hop on our bus for the ride back to our boat. When we get back we find a power boat tucked right behind us, and another power boat is being hand lined up to it and is rafted up. I speak with the owner of the outside boat and learn that his outdrive failed while in the locks, and he barely got clear of the locks. He’s been trying to get help to diagnose the problem, without much luck. He needs to get up to Dow Lake, a couple miles above our present location. I offer to tow him up there on Thursday, when we plan to head that way. He appreciates the offer and says they would very much like to take me up on the offer. We’ve been helped by so many folks on our voyage, it feels good to help someone else out.

We are further entertained this evening by some sort of film shoot involving 3 dragon boats, which are highly decorated canoes holding around 15 or 20 paddlers. To accomodate the film shoot, the river tour boat needs to move away from its accustomed tie up, further back in the canal. When we get back from our museum trip a crew member approaches us and asks us if we’d mind untying our boat from the wall and sitting out in the canal while the tour boat moves in and secures to the wall in front of our location. I’ve seen this boat go by, and have noted the bow and stern thrusters, and I also see that it’s a very calm afternoon, and the space ahead of me is at least 150 feet in length, to accomodate a 75 foot tour boat. I politely but firmly decline to move. I’m then told that if they hit and damage my boat it will be my responsibility. Talk about cheek! Needless to say, the tour boat moves up and secures to the wall with no difficulty at all.

Final event of the night is an extremely loud, emotional and highly profane verbal altercation between a man and a woman, just 15 feet from our boat. After listening to them go at it for about 15 minutes I call 911. I’m on the phone with the dispatcher for a good 10 minutes giving my report, and all the while the verbal battle continues. She tells me that a police unit is being sent. Shortly after the dispatcher hangs up, the battling pair start walking in opposite directions. I’ve been waiting for 15 minutes for the police to show up, but no colored lights yet. Presumably if this had been something more serious they’d get here more quickly. I sure hope so, anyway. 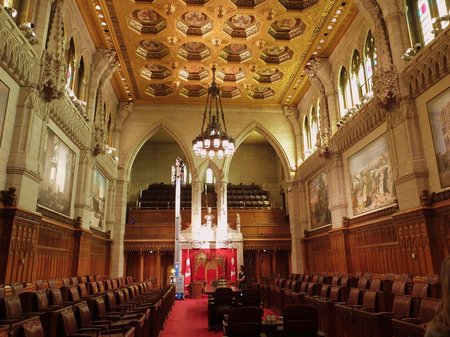 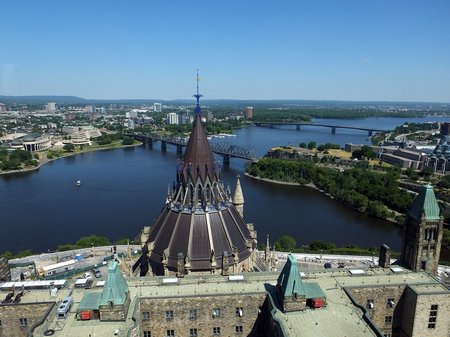 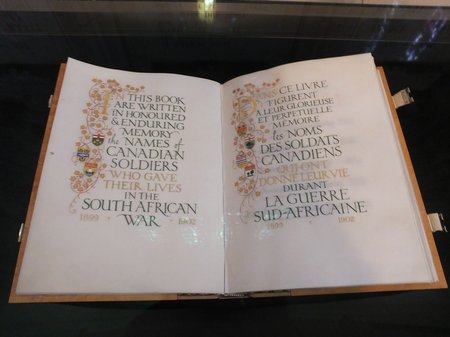 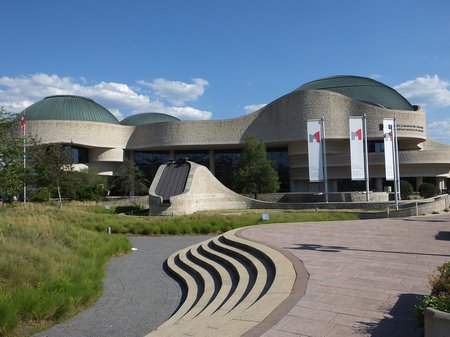 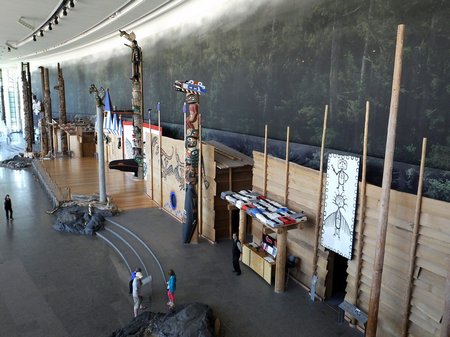 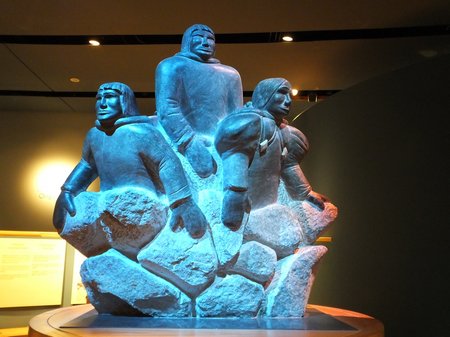 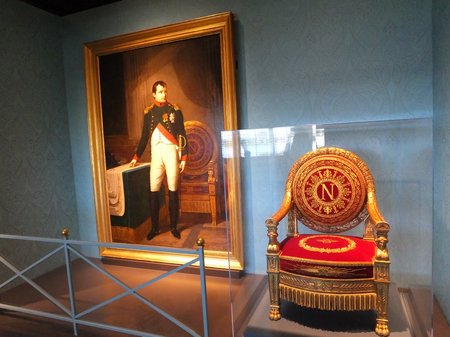 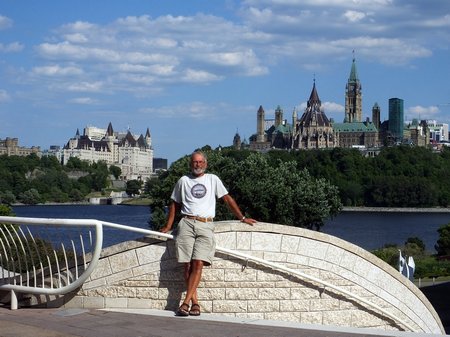 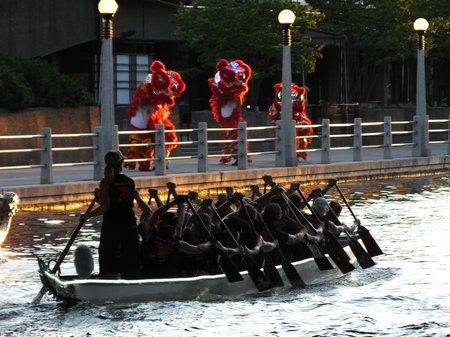