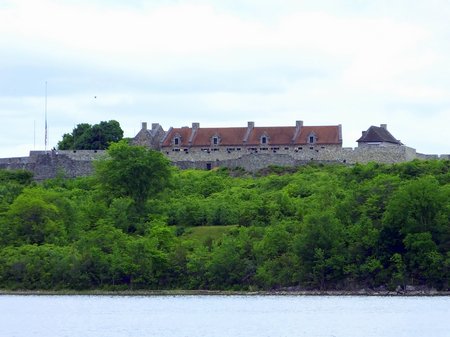 I’m paying the price for my exertions in raising the mast yesterday. Sciatica is fired up when I try getting out of bed. I take my time, and things slowly improve. After walking around I start feeling better. We coordinate cruising plans with our new friends Jim and Gwen, and we both decide to head for Button Bay today. It’s only 30 miles away, and offers good protection from the forecast northwest wind. As an added bonus, the shoreline is all part of Button Bay State Park, so we should have a good opportunity to go ashore for an afternoon walk. We pull out first, around 10:30am under an overcast sky which shows encouraging signs of breaking up. The breeze is light, offering no 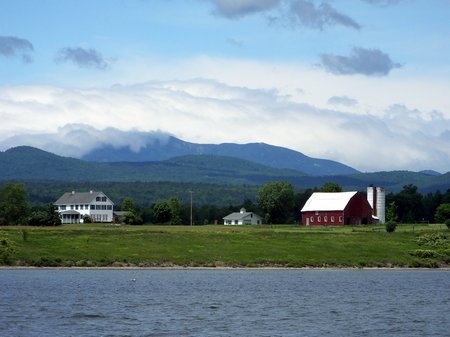 opportunity to use my newly raised sailing rig. After we round the first corner, Fort Ticonderoga looms into view. This historic fortress figured hugely in the mid to late 1700’s. The venerable old fort fell to ruin in the following century, however its supporters rallied and generated the support needed to sponsor a reconstruction to its original appearance. Having visited there 13 years ago, we opt not to stop, rather simply admiring the view as we cruise on by.

Next fort to appear is the old fort at Crown Point, which dates back even further. The mighty star shaped earth works are still clearly visible from the lake. This fort dominates a narrow bend in the lake, and today a major highway bridge crosses the lake there. An omposing monument stands near the west bridge approach, featuring a statue of Samuel de Champlain, first European explorer in this area. Our views are enhance by bright blue sky and warming sunshine. We have a nearly perfect sailing breeze, the only problem being that it’s right on the nose, and as much as I’d love to sail, I really don’t want to spend the entire day tacking back and forth. Eventually the lake bends slightly to the east of dead north, 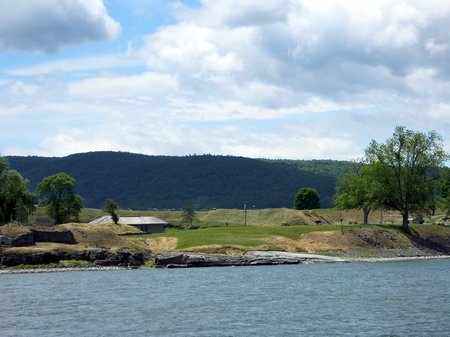 and the wind backs just enough into the northwest to allow me to pay out the genoa for a bit of motor sailing. It’s a nice reward for all my efforts in getting the rig up yesterday.

Just past Rock Island on the Vermont shore we pass the mouth of Arnold Bay. Following the naval Battle of Valcour Island, Benedict Arnold managed to lead his surviving gunboats in an escape under cover of darkness. The frustrated British gave chase and, in a running sea battle, threatened to overtake Arnold’s little flotilla. Arnold turned on the British in his flagship Congress and a few gunboats, and 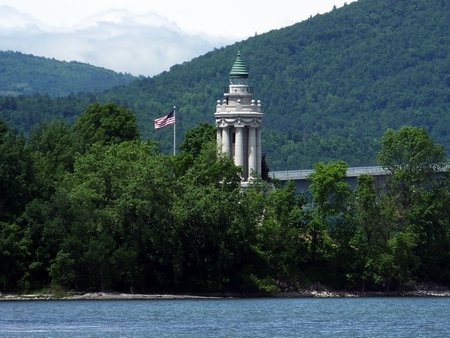 held them off long enough for his slower vessels to make good their escape. His valiant boats badly damaged, Arnold let them into the bay we’re passing, which now bears his name, where he burned them to prevent capture by the British. He then led his remaining crewmen on an overland march back to the Patriot army camp.

Our destination of Button Bay is clearly in view from the mouth of Arnold Bay. It’s a broad, sweeping bay guarded at its mouth by a sharp penninsula and island, which creates a nice anchorage well protected from north and west winds. We drop the hook in 6 feet of water, which is clear enough to show good bottom detail. It looks to be good holding ground and the anchor grabs firmly right away. Our friends Jim and Gwen arrive shortly after and anchor a little further out. I mount the kicker on the dinghy and we go ashore near the point. A nice trail network runs through the woods along the shore. Out near the point we come across a neat little nature center, situated in an old cabin. It houses nice exhibits on the local natural and cultural history. We follow the trail toward the main park area, and get a nice look at a red fox which is trotting along between the trail and the lakeshore. He doesn’t seem the least bit bothered by us, in fact, he pauses to stare at us as we peer back at him. On our way back we meet up with Jim and Gwen, who have likewise dinghied ashore for a walk.

We get back to the boat with just enough late afternoon sunlight available to enjoy chips and dip in the cockpit. We’re thankful for the perfect temperatures and lovely scenery. 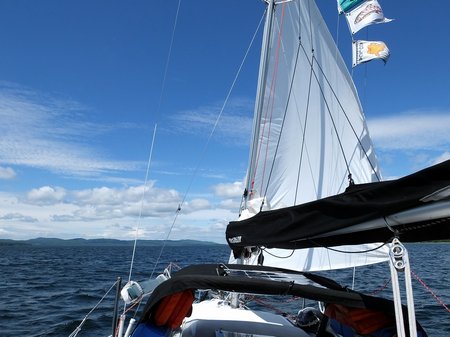 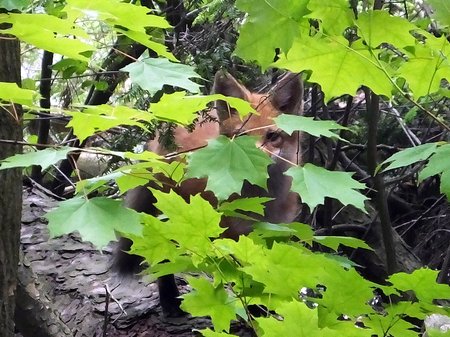 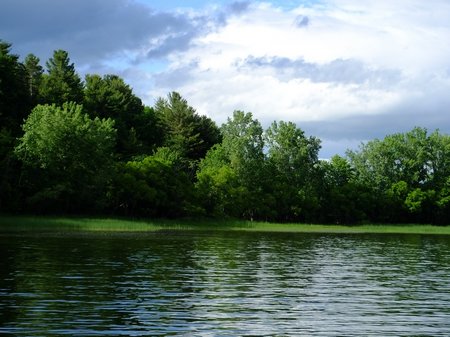 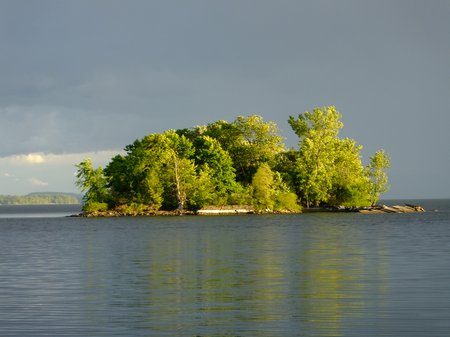