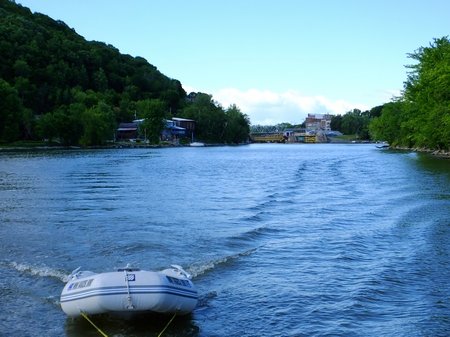 I’m feeling pretty good this morning, so we’re taking off. By the time we’re ready to cast off lines the wind has piped up, so it’s a little tricky maneuvering around just above the lock entrance, while we wait for the doors to open and the light to turn green. When the downstream lock gates swing open, Lake Champlain lies before us. It’s a deceivingly narrow thing at first, about the same width as the canal we’ve been navigating ever since leaving the Hudson River. The channel is snakelike as it winds its way around projecting hills, thickly forested with mixed deciduous and evergreen trees. This lake is the storied avenue of invasion between Canada and New York, 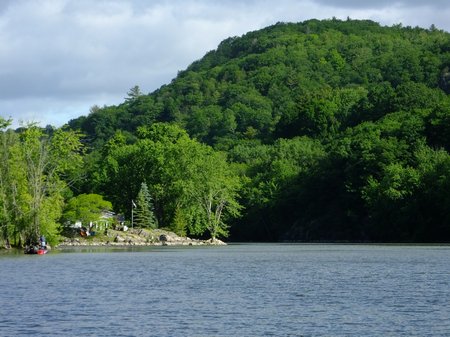 during the French and Indian Wars as well as the Revolutionary War and War of 1812. It was well known by all concerned that control of this lake meant control of the entire Northeast, and so its history is one of heroic deeds and desparate conflict. As I gaze at the forest which lines the shores, it’s not hard to imagine a Huron war party sneaking down a shadowy trail, intent on taking Mohican scalps. These days, for Great Loop cruisers such as ourselves, Lake Champlain will serve as our corridor for invading Canada, albeit with completely peaceful intentions.

We pass numerous bass boats on our way down the lake. Lake Champlain has earned a reputation for being one of the premier bass fishing lakes in the country. Judging by the numbers of boats and fishermen out this morning, it’s a good bet that a bass fishing tournament is underway. We dodge several nasty looking deadheads, and then encounter a very strange sight. From the distance it looks like an odd floating log, but on closer inspection it can be none other that a dreaded lake monster.

A chilly wind is blowing out of the north and the clear skies which greeted us first thing this morning have given way to leaden skies and the threat of rain. Fortunately, precipitation holds off until we arrive at our destination, Chipman’s Point Marina. We stop at the fuel dock to 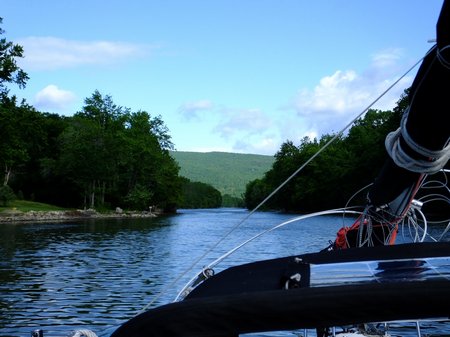 top off tanks, and then wait for the owner to arrive so we can take a slip. This place has a unique quality about it. The marina buildings are 2 and 3 stories tall, with stone foundations below, brick structure above. Intriguing boards near the roof peak display dates of 1810 and 1812. We learn that they are accurate, and a certificate inside the office proclaims that this marina dates back to 1810. Bronze plaques proudly proclaim that Chipmans Point is enrolled on the National Registry of Historic Places. The staff is friendly. We’re told that ice is $1.50 a bag. Just toss the money into a jar next to the freezer and help yourself. Laundry is $1/load. Once again, a jar serves as the cash till. Restrooms and showers are located up a very old, extremely steep yet sturdy set of stairs. The floating docks are surfaced with weathered planks and linked together with pins and “U” bolts. The wind chop which rolls in sets the docks to bobbing and twisting, and this results in a loud but 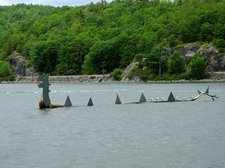 not displeasing musical chorus, rather like an orchestra tuning up.

After lunch I decide to rest up and nap before tackling the chore of raising the mast and rigging the boat for sailing. The prospect of traversing this 100 mile long lake with mast down is just too much to bear, even though I know that, with my sciatica condition I will pay a price. When I get started, a couple of guys wander over and offer welcome assistance. One asks me why I waited to start until the wind has kicked up. While I was napping it was dead calm outside, but now its raw and gusty. Oh, but that nap felt really good. The mast goes up with fewer than usual hitches, but I’m really beat by the time I finish up rigging all the lines and tidying everything up. It’s nice to see the boat once again fully rigged for sailing. Now the only question is whether I’ve pushed myself too hard.

Sandy and I go for a short walk up the hill after chores are done. The rolling Vermont farm country we’re in is verdant and lush. Woodlots alternate with hay fields and small groups of cattle. Taller ridges of mountains frame the horizon. Even under overcast skies the vegetation is rich with greens and spots of wildflower color. Back on board, Sandy cooks up a delicious pork stew which is just perfect on this chilly day. 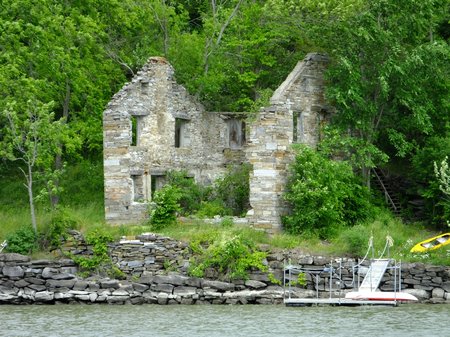 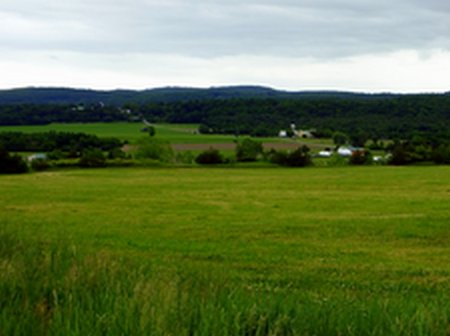 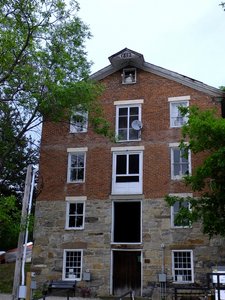 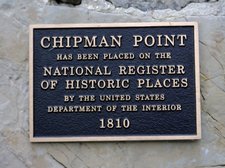