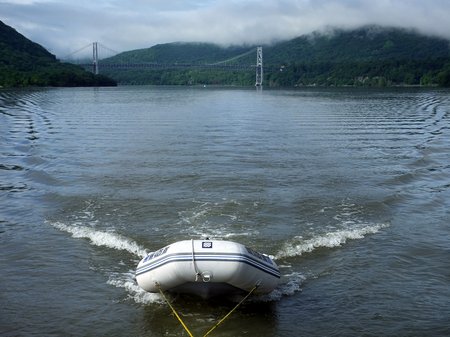 I picked up a little souvenier while we were in New York, a cold. I can’t understand why that would happen. All I did was visit crowded museums, ride crowded subways, and rub shoulders with half the population of New York. It really isn’t fair, since I also had a cold during my time on Chesapeake Bay. I just shook it, and you’d think I’d still have immunity. Those New York germs must just be tougher than most.

It rained last night and we’re a bit slow to get going today. We plan on going just a few miles upriver, in the hope of visiting West Point. I 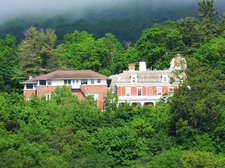 check the current chart and see that, if we take off right away, we’ll be able to catch the last half hour of the flood. That should allow us to reach West Point before the ebb has much chance to gather strength. The other 2 MacGregors in our little loop flotilla also get going upriver. We’re a little unsure just how to access West Point, and when we draw near to the place things still remain muddled. It’s the Memorial Day holiday, and none of the phone numbers we call provide a live person’s reply. There are places at West Point where we could dock or grab a mooring ball, however, without clear authorization that this is ok we don’t dare try it. Also, we know that, in order to enter West Point we need to go through security and there don’t appear to be any provisions for doing this from the water. It seems that the only way we can visit West Point is to proceed several miles upriver, stop at a pricey marina, and then hire a tour company to take us there. None of us want to step onto the grounds that badly, and so we content ourselves with viewing our military academy from the water while passing by. The view is imposing, which I suppose is part of the idea. It occurs to me that, given Army’s deeply imbedded rivalry with Navy, it’s completely understandable that approaching West Point from the water is to be discouraged. 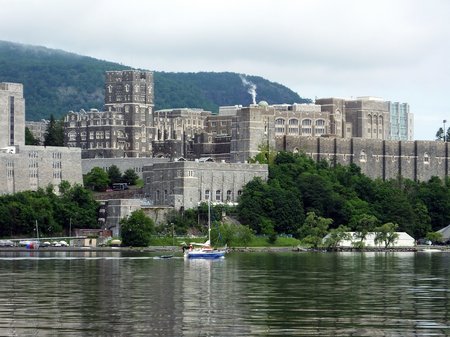 A short distance above West Point we pass the brooding cliffs of Storm King Mountain and approach little Pollepel,site of the Bannerman Castle. This curious structure was built between 1900 and 1918 by Frank Bannerman, a munitions dealer who made a fortune during World War I. His edifice was designed to resemble a medieval castle. It burned in 1969 and stands today as a haunting ruin, perhaps symbolizing the ultimate folly of the Great War which funded most of its construction.

The next landmark we pass is the town of Newburgh. It’s at this point that the waters of the Hudson become completely fresh. For the past 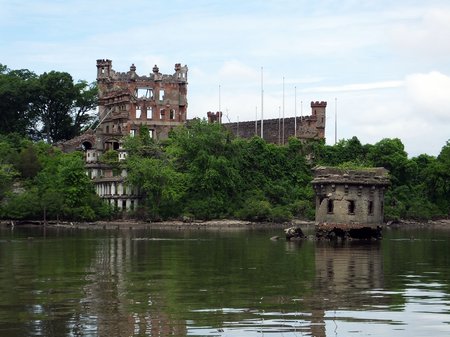 7 1/2 months we’ve been cruising in either salt or brackish water. From here on, we’ll be in fresh water. It was probably this characteristic which explains why Newburgh, some 60 miles up the Hudson, was at one time a major seaport and the home of a substantial whaling fleet. The Hudson’s fresh water was lethal to barnacles and other harmful growth which tends to foul the hulls of wooden sailing ships.

Since we have given up hope of visiting West Point, the cell phones and VHF radios support active conversations as we seek to identify a reasonable destination for the day. We end up targeting the Poughkeepsie Yacht Club, which offers dockage at very reasonable rates, as well as mooring balls for even less. 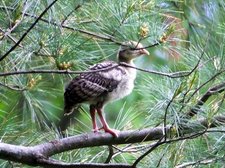 Around noon we pick up a following breeze and I’m able to let out the genoa. I use my whisker pole to help keep the sail open in the light wind. The adverse current holds speed back to around 5 mph for much of the way, but as the current begins to weaken and the wind increases, our speed creeps up past 6. We arrive at the Yacht Club shortly after 4pm, and we’re immediately taken by the place. The venerable dockmaster is extremely friendly and helpful. The facilities are neat and well cared for. We are given a tour of the place, and are able to relax in the upstairs air conditioned lounge where they open the bar up for us. Cold beer and ginger ale goes mighty fine on this hot, humid afternoon.

One of the key reasons for staying here is it’s close proximity to the Vanderbilt and Roosevelt mansions. After dinner some of us make plans to go on tour there tomorrow. Meanwhile, Sandy and I go for a nice after dinner walk, finding a delightful trail through the woods. We see a pair of white tailed deer and a young wild turkey. A hiker we encounter on the trail tells us that this trail goes for 20 or more miles in either direction, and groups are actively working to create a walking path all the way between New York City and the Adirondaks. I certainly hope they succeed in this endeavor. 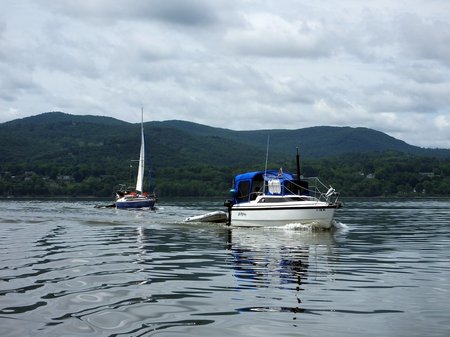 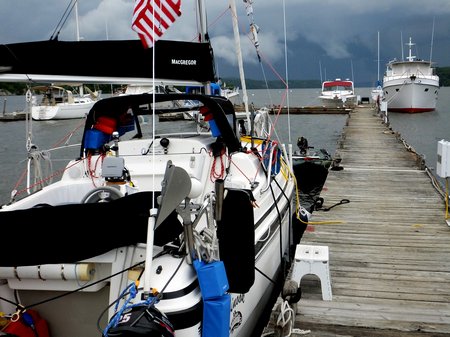 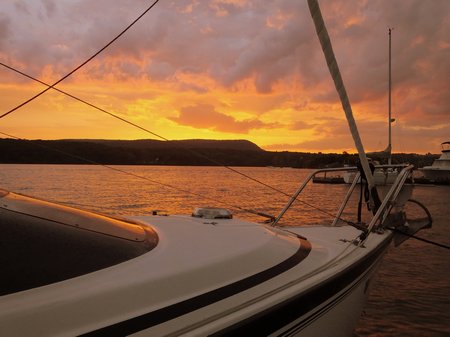