First of All – Some of Baltimore’s firsts –

This is Mothers Day, so the three of us head over to the Rusty Scupper, a nice nearby bar and restaurant which features a great Sunday Brunch. We arrive at 10 am, a half hour before the advertised start time, and we find the place already in full gear and very busy. Despite not having a reservation we’re seated without delay. A lady at a nearby table tells us that people reserve for the Mothers Day brunch up to 4 months in advance. We feel fortunate to be worked in so easily. The food is great, and the setting lovely, with sweeping views out over the entire Inner Harbor. Before going into the restaurant we tossed our laundry into a washing machine in the marina laundry room, which is conveniently located just downstairs from the restaurant. By the time we’re done eating the wash is ready for the drier. We return to the boat and I start tackling boat chores. I haul the sleeping bag, mattress and topper out onto the dock, since they’ve gotten slightly wet. We pounded some heavy seas on the run up from Annapolis, and probably got some water in then. The forward part of the Vee berth is moist, so some of the water may be due to condensation. In any case, it’s sunny and windy, perfect conditions for drying things out. I also haul out the carpets so they can dry (been getting damp from us coming and going in all the wet weather). I also shake and 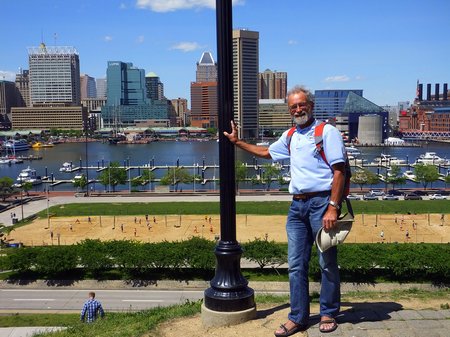 brush as much debris out of them as possible. Next, I wipe down interior fiberglass surfaces, including the head, using some spray cleaner. Lastly, I inventory our provisions and put together a grocery list. After Peter returns with the dried and folded laundry we go for a walk, over to Federal Hill, which is the highest point near the Inner Harbor, and probably the highest point in Baltimore. We enjoy a panoramic view from atop the hill. It was a natural hill, made higher when it was fortified back in Revolutionary War times. During the Civil War Union forces occuppied the place, and trained cannon on the City of Baltimore, since this city held strong Southern sympathies. It has been said that if Baltimore had been taken by the Confederates Maryland would have gone with the South. This would have likely resulted in the capture of Washington DC by the South, and could possibly have been key to a Confederate victory. It was actually closer to happening than most people today realize. The first casualties of the War occurred right here, when crowds rioted and attacked a column of Massachusetts troops who were marching through the City to help garrison the Nation’s capitol.

We scramble down the hill and just keep walking, back around the Inner Harbor and over to the Whole Foods grocery store, which is 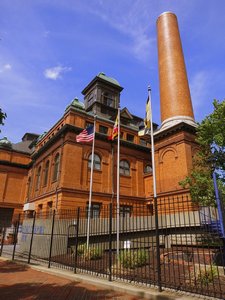 located amidst a cluster of condominium and apartment towers on the east side of the Inner Harbor. I’m able to find most items on my list, but they don’t carry Tang and, of all things, powdered coffee creamer. This store is distinctly up scale in what they carry and what they charge. I conclude that Chinook is more of a Walmart grocery type of boat versus a Whole Foods boat. We tote the provisions back to the boat where I manage to stow them in our tubs and hanging nets. By dinner time we’re only marginally hungry following this morning’s brunch, but we do manage one last meal out at a nearby Irish Pub. We sit outside on the upper deck, gazing out at the throngs of people strolling by on the broad Inner Harbor walkway.