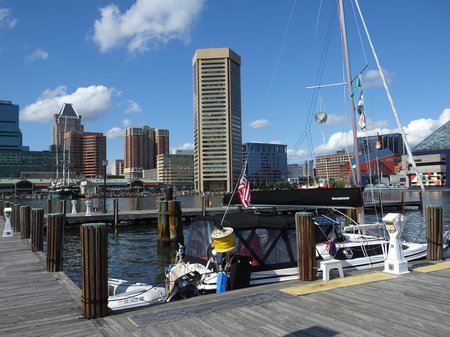 Patches of blue sky greet us this morning when we emerge from the cabin. To say this is a welcome change from yesterday’s rain would be an extreme understatement. We pack a lunch and head over to the nearest water taxi landing, where we step on board for the run out to Ft. McHenry. The taxi takes us over to Fells Point where we change boats and cross the harbor to Ft. McHenry. The fort is strategicly situated on a penninsula which commands the entrance to Baltimore’s Inner Harbor. In 1814 the British needed to subdue the fort before entering the Inner Harbor. This action was critical to their plans for destroying Baltimore. Despite the fact that only 4 Americans died 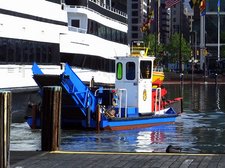 during the famous battle, the British very nearly succeeded in their aim. One of their “bombs”, actually 180 lb mortar shells which could be fired a mile high and 2 miles in distance, made a direct hit on the fort’s powder magazine, where 30,000 pounds of black powder was stored. If the mortar had detonated the magazine would have blown up and the fort would have been obliterated. Fortunately for the Americans, this bomb was a dud and merely fractured some timbers in the roof. History might read much differently if it had exploded. We learn amazing stories like this at Ft. McHenry. Much of the presentations there focus on Francis Scott Key and how he came to witness the battle from the deck of a British ship, and how he was so moved to write his memorable verse which became our national anthem. In one of the fort’s buildings we view the actual wooden timbers which formed the foundation for the flagpole from which the star spangled banner flew on that fateful morning. The flagpole at the fort now stands on the very spot where the original pole once stood. Following our walk through history we step outside and picnic at a bench, looking out over the waters where the British fleet was anchored. Fort McHenry is another of those special places which all Americans should visit. 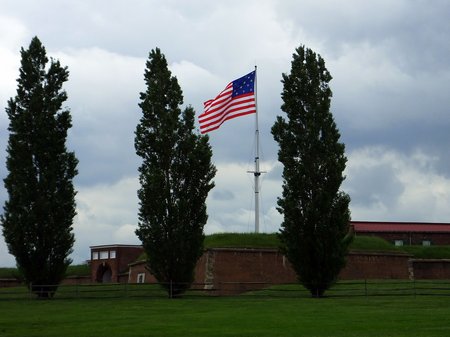 We reboard the water taxi and cross back to Fells Point, which is one of the older districts in Baltimore. We walk along the main street, which is paved with cobble stones from ship ballast, and step across a set of old railroad tracks. These are the very same tracks which Abraham Lincoln rode upon when he traveled to Washington to assume the office of President, just prior to the onset of the Civil War. We catch another water taxi which takes us back to the Inner Harbor and we walk around town, visiting the house where the Star Spangled Banner flag was sewn. We also walk out to the shot tower, an enormous brick tower built around 1820, where lead shot was made by 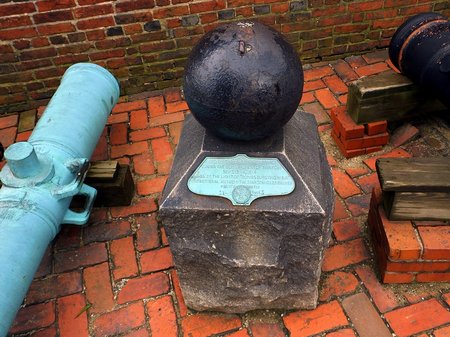 passing molten lead through a sieve and allowing the lead droplets to fall more than 200 feet, into a water tank inside the base. The sun shines brightly as we make our way back to the boat, where we rest and relax over drinks and chips. We eat a quick dinner of crab soup before heading over to Camden Yard, where the Baltimore Orioles are playing the Oakland Athletics. I’m a huge baseball fan, and I’ve been hoping to catch a game here in Baltimore for quite a while. Peter and Mary Ann aren’t baseball fans but they are good sports, and they come along. We have a fun time, with good seats. The game is entertaining, and I’m particularly intrigued when I see a sign for Dempsey’s Brew Pub and Restaurant, mounted on the side of the stadium. You see, Rick Dempsey played catcher for the Orioles back in the late ’70’s and early ’80’s, and was a World Series hero when the O’s won the Series in 1983. I went to high school with Rick (he was 2 years behind me), so I always followed his baseball career with great interest and pride. I learned that Rick is a radio announcer for the Orioles, and is actually at the game tonight. I try to get in touch by handing a boat card with a phone number on it to the Fan Support office people. Not surprisingly, I don’t get a call back, but I do see him up in the announcer’s booth, and I snap his picture with the telephoto lens. We join the throngs of fans who stream out of the stadium following the last out (the O’s won, 5-2) in a light sprinkle of rain. It’s great to have the ballpark located here, right in the middle of the city. 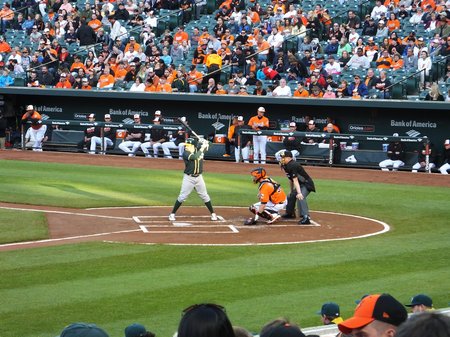 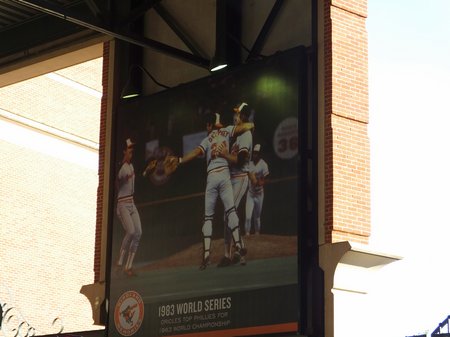 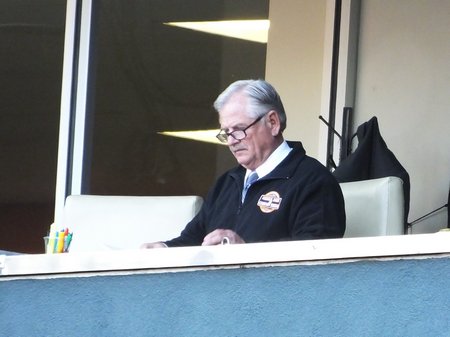