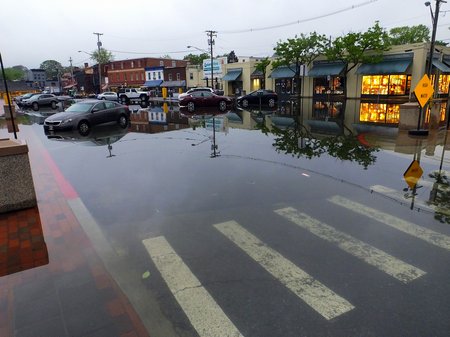 Today is another in this extended series of cold, wet, gray days. Only, today is even more so. The rain begins as I prepare to untie the boat. This operation is complicated by the fact that it’s high tide and the tide is 1 1/2 feet higher than normal high tide. The nearby parking lot is fully flooded, and our boat’s waterline is nearly even with the finger pier deck. This makes for an extremely tall step on and off the boat. Fortunately, it’s not windy and I have ample time to untie all lines and climb back aboard. It’s breezy once we get out onto the Severn River, and it’s downright windy on the main Chesapeake, as we cross under the Bay Bridge. This makes for extremely rough seas. Several times we virtually bury the bow in the shortly spaced waves. Four to five footers for sure. Thankfully, the rough stuff doesn’t last long, and we eventually gain the protection of the Patapsco River. We pass beneath the Francis Scott Key Bridge, which has been constructed at the approximate location where he stood on deck in the early morning hours and saw our flag still waving. Fort McHenry is 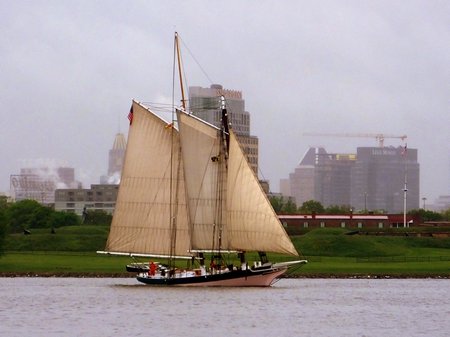 on our port side as we make the turn which the British were prevented from doing, and we enter Baltimore’s Inner Harbor. The waters are calm, although it’s pouring down rain. I radio Baltimore City Dock for a slip assignment. That’s easy, since there are absolutely no boats at their docks. “Take your pick, just don’t grab a spot in the middle”, we’re told. I ask for assistance in docking, and am told that they can’t go out until the rain quits. Well, it’s been raining steadily for the past 4 hours. We have no choice but to handle docking on our own. Before going over to the office, which is more than 1/4 mile away, we take time to heat up some soup for lunch. When I check in, I ask if they have WIFI. They say they did, but not long ago they were visited by the Mexican Navy. This boat, while departing, managed to collide with their WIFI antenna and knock it down. They weren’t sure if it had been repaired yet. Sounds like an act of revenge on the part of Mexico for us stealing Texas, New Mexico, Arizona and Utah from them back in 1848, if you ask me.

After checking in, we grab umbrellas and head over to the National Aquarium, which is just a short distance away. This aquarium is housed in a 5 story structure, and it’s one of the finest I’ve ever visited. The exhibits are beautifully presented, and in addition to fish from the world over, they also have birds, reptiles and many other creatures. Volunteer docents, in distinctive blue shirts, are wandering around throughout the place, ready and eager to provide interesting information about the creatures displayed. At one habitat a docent placed beetles on the end of a stick and held them out over the water, above a school of archer fish. It was amazing to watch those fish accurately launch sprays of water at the stick, knocking their lunch into the water. We finished our aquarium tour off by watching their 4D film about prehistoric swimming reptiles. It’s a great movie, and special effects inside the theater make for a truly startling experience. For dinner we stroll uptown, into the district known as Little Italy, where we enjoy a delightful dinner at a great Italian restaurant. 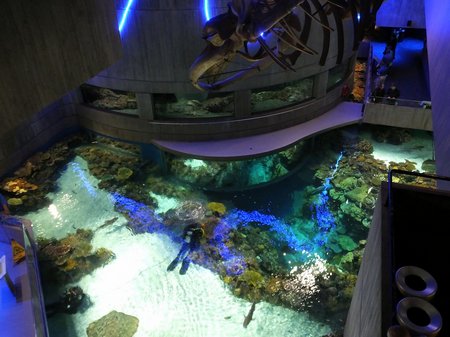