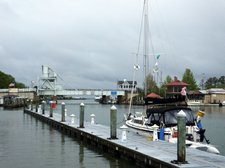 Rain pelts us off and on for most of the night, and it’s raining when we get up, around 7am. We’re in no great hurry to get going, and so we take breakfast in the cabin before pulling up the anchor. This is in contrast with our practise of the previous 2 days, when I got up and going early, eating a breakfast of sweet rolls or granola bars while at the wheel. We time our departure with a fortunate pause in the rain showers, and pull out of Solomons shortly after 8am. It’s a little breezy, and once we get out onto the Bay we are rocking and rolling with a substantial side swell. I’m able to help things out a bit once we’re able to turn north, along the Calvert Cliffs, by letting out some jib and lowering the centerboard. We pass some large docking facilities, which appear to be for offloading petroleum or liquified natural gas products. We angle out across the Bay in 2 foot swells, motorsailing on a reach. For a good while we’re able to maintain over 7 mph. It’s very gloomy outside, with 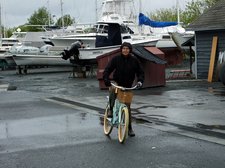 frequent periods of heavy rain showers. From a distance we gaze at the mid-Bay lighthouse, which has been tipped at a serious angle by the pressure of ice. Shortly after noon we draw near to Knapps Narrows. The rain pours down, and I get the foul weather gear out, anticipating having to tie up in heavy rain. Thankfully, the rain quits just before we reach the entry channel. As we draw near, I call the marina. The dockmaster says they have plenty of room, and he’ll meet us on the dock. Next I call the bridge tender, requesting a bridge opening. I’m thankful for his prompt opening, since there’s a noticeable current pushing is down the channel, and I don’t want to have to try turning around in the narrow channel. Once we’re clear of the bridge we approach the marina, which is just to the west of the bridge. We’re placed on a nice floating face dock.

After checking in we grab 3 bicycles and go for a ride over the draw bridge and onto Tilghman Island. We’re heading for the old fashioned country store, but before getting there we see a small museum, the Tilghman Waterman’s Museum, and it’s open for the next 30 minutes. We go inside, and enjoy a delightful visit. The museum has several exhibit galleries, 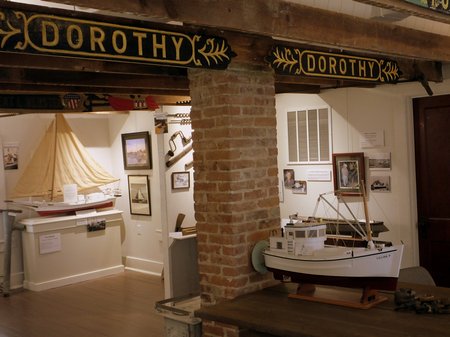 and is very nicely arranged, with a nice mix of photos, informational panels, videos and artifacts. A local self taught artist is featured in one of the galleries, and his work is remarkable. Beautifully detailed models of classic Chesapeake Bay working boats and exquisitely carved name boards from skipjacks and bugeyes now long gone are on display. After leaving the museum we pedal over to the country store. It’s well stocked with the basics, and has a nice meat counter as well as some interesting local foods. I stock up on some tasty looking canned crab soup, and we also decide to pick up a tub of their freshly made chilli. As cold and wet as it’s been lately, the soup and chilli should both warm and fill us up at meals to come. Our final stop is at a local woodworkers shop. The owner proudly shows us

the boxes and framed ship half molds which he makes there. He also tells us a bit about Tilghman Island, mentioning the significant number of notable people who live there, at least part of the time. He lists people like Donald Rumsfeld, Willard Scott, a member of the Kennedy family, and a prominent space scientist among the folks who are drawn to the peace and beauty of this corner of Maryland’s Eastern Shore.

We return to the boat and stow our groceries. Afterward, we go for a walk to rouse up appetites. The big debate is whether to draw from our ample larder for a meal on board, or go out for dinner at the nearby waterfront restaurant. Going out is the winner, and we’re not disappointed. The special of the day includes a special preparation of scallops, and both Peter and I order them. They’re excellent. After dinner we order slices of Smith Island cake for dessert. We missed trying it when we were at Smith Island, and we must sample it here. It’s an amazing 11 layer cake, with a pistachio flavored frosting, and we love it. 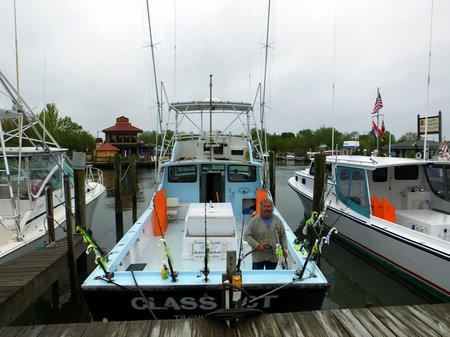 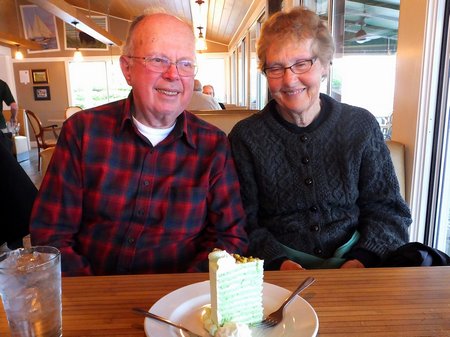