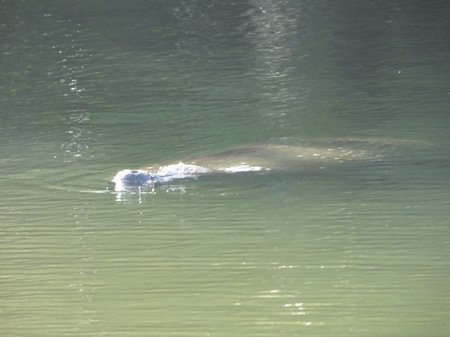 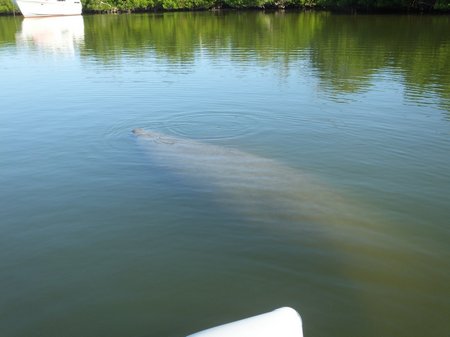 stumble up to the companionway hatch, lift it out of the way, and gaze at mangroves brushing our backstay in the moonlight. We’ve dragged anchor in the shifting breeze. I start the engine and go forward to raise the anchor while Sandy takes the wheel. I pull the anchor rode in, expecting to draw us away from shore, but the anchor simply skids across the bottom. Sandy puts the boat in gear, and we snap a few dead mangrove limbs off as we head out toward the center of the lagoon. I pull the anchor rode in and lift the anchor up. Surprisingly, it’s clean. I recall having a little trouble getting it to hook, but we did set it when we arrived, so the change in wind coupled with a soft bottom must have caused the problem. Sandy repositions the boat and I lower the anchor. It sets well. Just to be sure, I attach and lower the 15 lb kellet, to reduce the angle of pull. That done, we crawl back under covers to salvage a couple more hours of sleep.

We rise shortly before 8am to a bright sunny day. It’s still breezy, but pleasant. We sip our coffee in the cockpit, entertained by a pair of pileated woodpeckers who are busily occupied in driving off a sharp shinned hawk. The hawk is a bird hunter, but is significantly smaller than the woodpeckers, and seems clearly outmatched. While this show is going on, Sandy hears something behind her. “Sounds like breathing” she says, thinking we have a dolphin working the area. I look in the direction of the noise and see a small round shape break the water’s surface and then duck down again. It’s a 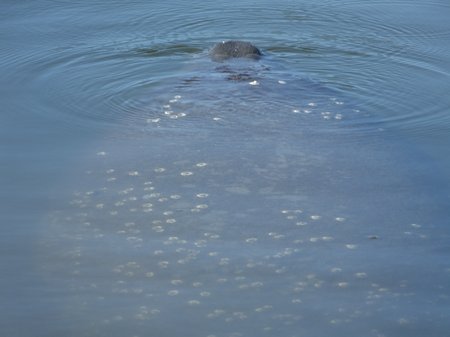 manatee. In fact, we have 3 manatees very near by. A mother and calf and another large adult are feeding less than 30 yards away. We climb up on the cabin roof, camera in hand, and enjoy the show. I shoot dozens of pictures, hoping for a perfect view. It’s difficult, since they don’t stay up very long, and they only show a small part of their immense bulk. The water is fairly clear, but much of the time we’re looking into the glare of sunlight. After a time, we get into the dinghy with the GoPro camera and try for some underwater pictures as well as closes view still pictures. It’s a very special time, and although the day has just started, we have memorable moments to be thankful for. We row back to the boat and I grab my fishing pole. We row ashore at the start of a little trail and walk across to the channel side of 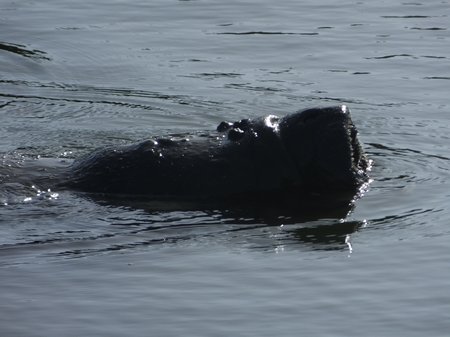 the island. We pass several large den excavations, which we presume were made by gopher tortoise. We walk the narrow beach and I fish for a bit, getting a couple of strikes but no fish. We see that the wind has really piped up, so we head back to the boat, raise anchor, and follow the narrow channel out to the main GICW route. The bay is again covered with whitecaps, and several boats are cruising south. After I make our turn toward Cabbage Key, I lower rudders and centerboard, and pay out a small patch of jib. The wind is stiff and on our port beam. We’re heeled 15 degrees and the wind is easily blowing 20 knots, maybe more. We follow a large sailboat to the Cabbage Key entrance channel. I radio the marina and Jeff, the dockmaster, replies. He sounds a bit dubious when I tell him we want to come in to the marina. The marina is fully exposed to wind and sea, and I know it will be extremely difficult to get safely in, but we really want to take showers and have Thanksgiving dinner at the Inn, and I don’t relish anchoring out across the bay at Useppa Island and then trying to dinghy across. Jeff says he’s got a spot for us, but it’s narrow. He says to hang out for a bit while he moves a power boat to give us an easier approach. I busy myself setting out all 9 of my fenders, including the big ball float. I fender both sides of the boat just in case. I also deploy fender boards on both sides. Fishing rods and stern anchor go down into the cabin, the 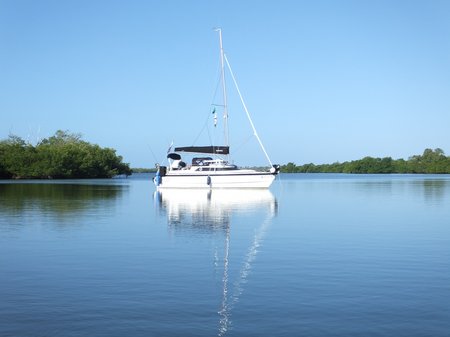 barbque gets rotated so it doesn’t project out, I draw the dinghy up close, and I ready dock lines. When Jeff gives the word we head in. The wind is blowing a steady 20 knots, and nearly at right angles to the slip. The slip itself is a short fixed dock with pilings on both sides. The pilings for the slips are so close together they look like fence posts. I spot Jeff who is giving us exaggerated gestures, marking the space he wants us to come into. It looks impossibly narrow. I motor past, to get a good look, and then make a 180 degree turn so I’m pointing into the wind. I ease up to a spot just past the slip and then make a turn to starbard. At the last possible moment I turn the bow between the pilings of our slip and give a little shot of power. Sandy expertly tosses Jeff our bow line and he quickly takes a wrap around a short piling. The wind catches the stern and pushes it against a piling, but we’re able to get control of the boat with lines and engine. We’re in, and without any damage. I look at the pilings of our slip. We have about 10 inches of clearance between hull and pilings, on both sides. That’s what I call tight, kind of like trying to squeeze into a stiff new shoe. The wind is still howling, but it can’t hurt us now. I rig spring lines and adjust fenders, glad to be tied up at Cabbage Key.

This is a busy place on Thanksgiving afternoon. A large ferry makes several trips out here, filled with passengers who come here for a 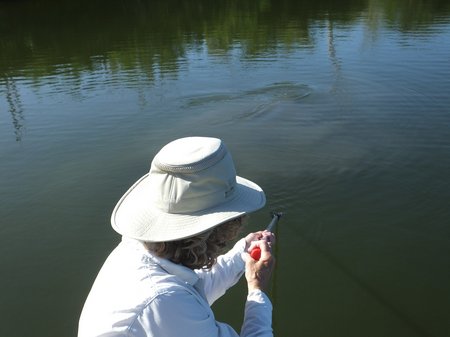 Thanksgiving meal and a walk around the island. We visit with several folks whom we’ve recently met, including Lyon and Evyonn, who shared the anchorage with us last night. They come aboard for a look at our boat, which is in sharp contrast with the 45 foot cabin cruiser they’re on. Lyon has designed boats though, and shows a real interest and appreciation of what we’ve done to our boat to enable it to make a trip like this. After they take off, we visit the showers, and get ready for dinner. We dress up, to the extent that our duffel bag cruising wardrobes permit, and wander over to the Inn. We go for a short walk before entering, and are entertained by a sign along the trail, cautioning about a nuisance alligator being recently seen on the trail. We don’t see the alligator, but we do see a couple of the island’s many gopher tortoise, up near the restaurant. They dig remarkably large and deep tunnels, which can go as far as 50 feet. They are remarkably quick on their feet, for tortoises that is. 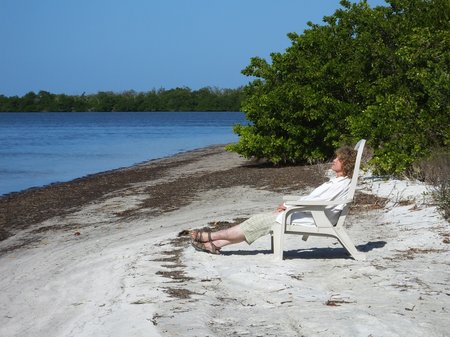 Dinner is a memorable event. The Inn itself is around 80 years old, and has hosted many well known people, including several presidents and other notables. Local lore has it that Jimmy Buffet was inspired to write his signature song “Cheeseburger in Paradise” while here. I don’t know if that’s exactly true, but he has been here numerous times, and they do serve cheeseburgers for lunch, and this place does have a bit of a paradise feel, so go figure. The interior decor deserves mention, given that the walls and ceilings are literally papered with signed dollar bills, an estimated 50,000 of them. They occasionally fall down, and staff gathers them up, donating an average of $1200 fallen dollar bills to local charity each year. Our Thanksgiving dinner is excellent, with turkey done just right, along with all the fixings. The sweet pototo cassarole is particularly noteworthy, incorporating shaved coconut and Meyers rum. The flavors go remarkably well together. We definitely have much to be thankful for, not the least of which is a very memorable Thanksgiving, 2015. 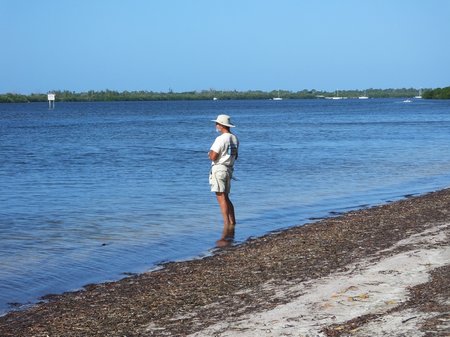 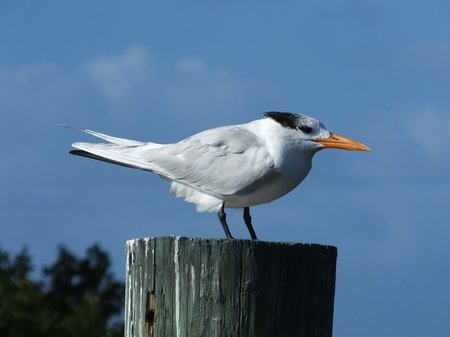 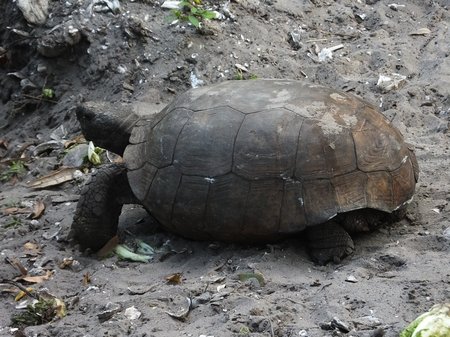 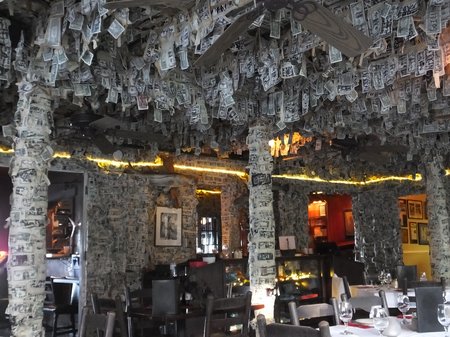 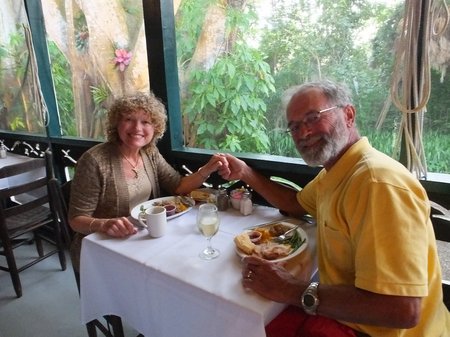