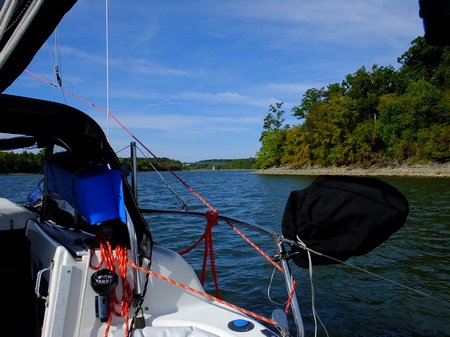 We awake to a clear, crisp, bright day and ideal conditions for resuming our cruise, with a light breeze out of the north. One last trip to the office for a block of ice and we’re off. We motor up Barkley Lake for 2 miles before reaching the Barkley Canal which links Barkley Lake with Kentucky Lake, on the Tennessee River. Once we clear the canal I raise both sails and we ease along at 5mph, motor sailing 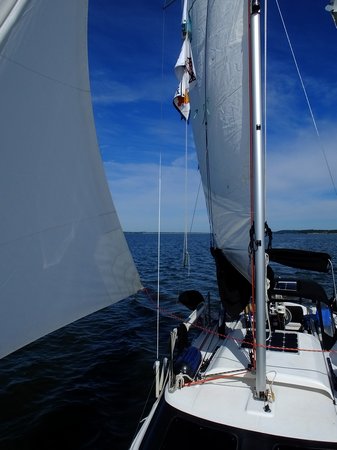 with the engine at 2000rpm. We don’t plan on going far today, so I don’t need to push up the speed. I’m pleased to see the battery voltage way up as we motor, well into the 14 volt range. On our port side is the area known as Land Between The Lakes, the narrow strip of land lying between the Cumberland and Tennessee Rivers. This land is federally owned, and devoted to recreational use. I’m trying to figure out which anchorage, among the many inlets on our port side, we should plan on staying at for the night. One of the two bison and elk reserves appears to be situated fairly close to an inlet named Turkey Bay. My map shows a dirt road, less than a mile long, leading out to the highway, and then only 2 miles to the reserve and visitor center. I’m thinking we could anchor in Turkey Bay, dinghy the folding bikes ashore, and then bike over to the reserve. The one catch to this plan involves the designation of land adjacent to
Turkey Bay as an ATV use area. I figure they can’t be too obnoxious, so we head for Turkey Bay. We see a few 4 wheelers and dirt bikes as we ease into the bay and set the anchor. The ATV activity quickly picks up as we prepare to dinghy ashore and scout the area out. The noise level spikes as a couple of completely unmuffled 4 wheelers roar around. One big guy tries blasting his way through mud flat and nearly buries his ATV in the mud. He revs up and wildly spins his wheels, but simply digs in deeper. He’s buried almost to the tops of his tires before he shuts the engine down. Buddies gather to ponder the situation. Finally one guy digs out a tow strap and hooks on. After several tries he finally drags the stuck rig 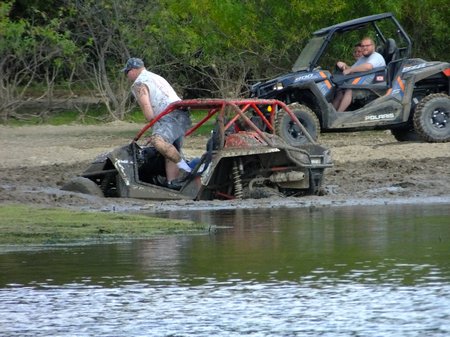 out. I confess I’m a bit disappointed. We row ashore and go for our walk, but it’s a crazy scene there, with dirt bikes and 4 wheelers roaring around all over the place. We talk to a few, asking if they know how to get out to the highway. Amazingly, it seems no one knows how to get to the highway. Makes me wonder how they found their way out here. We quickly conclude that hauling our bikes ashore in search of elk and bison here is really not a very good idea. We opt instead to return to the boat. We consider pulling out and seeking a quieter anchorage, but end up deciding to stay, figuring that by the time we got reset, this place would have quieted down. It works out that way, and by the time I fire up the barbque to grill hamburgers, the last of the ATV’s has left. We dine in peace, enjoying the beauty of this place as the low angle light illuminates the forest edge. As dusk descends, 3 deer emerge from the forest to drink from the lake. A heron flies in, to hunt for small fish in the shallows. Little fingerlings squirt out of the water in such numbers that it almost looks like raindrops hitting the surface. Bass thrash after them with dramatic splashes. After the raucous engine noise of just a few hours ago, it’s refreshing to see this place come to life again. 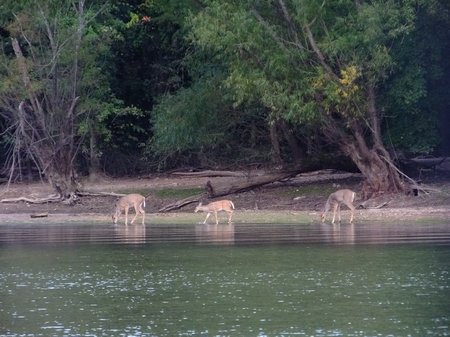 One thought on “Anchored with ATV’s”