We jump off early today for our final day on the big rivers. We’ve been moving fast, and including today’s anticipated run will have cruised 263 miles in just 4 days. That says something about how hospitable this leg of the trip is. These big rivers are a unique combination of wilderness type places, dominated yet by commercial shipping use. The Corps of Engineers has built hundreds of wing dams on the Mississippi, deflecting the current to the center of the channel. Inviting side channels are walled off with piles of rubble, making them impossible to use as anchorages. You can go dozens of miles without finding a single place to safely get off the main channel, unless you risk trying to tuck in behind a wing dam, which invites running aground on the sand bars which develop below them (and with the muddy water, you can’t see a thing in the water). 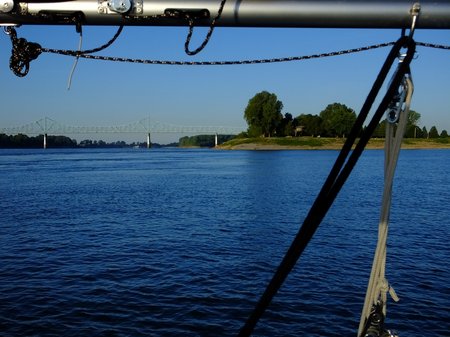 We quickly run the last 7 miles we’ll travel on the Mississippi and swing a broad turn to port as we enter the mouth of the Ohio River. The Ohio is to the east what the Missouri is to the west. It’s a major artery of commerce, providing water born commercial passage to states as far south as Alabama and as far north as Pennsylvania. The town of Cairo hides behind its massive flood barriers at the 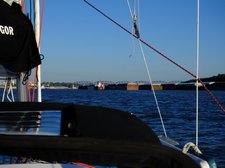 confluence of the Mississippi and Ohio Rivers, and it has a lengthy history of flooding despite the best efforts of the day to keep waters at bay. Cairo appears to be a major center of barge traffic for both rivers, and we play “dodge the tow boats” for several miles, before getting clear of them. Once the river opens up, we instantly take a liking to the Ohio. In spite of the fact that we’re going against a 1 to 1.5mph current, which slows us considerably from the booming speed we got on the Mississippi, the Ohio has none of the roughness of the Mississippi. No whirlpools, no wing dams, no wind against wave chop, and virtually no woody debris. She’s just a broad, relatively shallow, and today smooth faced river, inviting us upward. The forested shoreline seems prettier, with a nice mix of trees, and the occasional eagle, heron, or pelican to attract our attention.

The Ohio does have some manmade challenges, though. The first is at the Olmstead Lock construction site. We’re told that this lock has 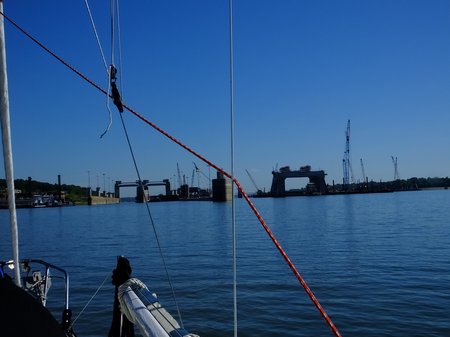 been under construction for over 10 years, and still with no completion date in sight. It is intended to replace two old, decrepit locks upstream but until it is put in service, old Lock 53 and 52 are still needed. Approaching Olmstead we radio the lock 2 miles below, and get instructions to hold in place until told to move. We putt around for an hour before getting the signal to proceed. We cruise up through the new lock chamber, which is open at both ends, and then are directed on how to pass the clear water channel over the weir. These Ohio locks have a unique 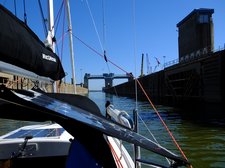 feature, namely weir dams anchored to the bed of the river. They can be lowered when the river is high, thus allowing boats and tows to pass right over them. In lower water conditions, the weirs are raised, and locks must be used to pass the dams. We pass over the weir for the Olmstead, and are also able to bypass Lock 53, since it’s weir is down. A dozen miles above 53, however, Lock 52 is waiting to ambush us. The main chamber of this lock was damaged by a barge, thus knocking it out of commission. This means that all traffic must be locked through the smaller auxilliary chamber. Last week tows had a 36 hour wait to get through. This has recently improved, however we still have to wait 2 hours for our chance to go through. We lock through in the company of 3 large motor yachts, plus us and our sailboat friend of the past couple days. We all line up on the right bank descending wall of the lock. We’ve been instructed to have life jackets on, and a pair of 50 foot dock lines ready for use. We pull in behind one of the power boats and a lock attendant lowers a line, with a wire hook attached, down to Sandy. She loops our dock line onto the hook and the attendant pulls the line up, passes it around a large bollard, and then lowers it back to her. She then wraps the line around our bow cleat and holds onto the line, without cleating it off. I do the same at the stern, and thus our boat is secured to the side of the chamber. When water starts to fill, we take up slack on the lines. The old chamber doors creak loudly as they slowly close, and it seems to take forever for the water to rise. It’s uncomfortably hot down there, since the breeze can’t reach us. At long last, the water fills, the doors open, and we’re off. It’s nearly 5pm and we still have a 2 hour run to our anchorage at the mouth of the Cumberland, so Sandy fixes up cold burritos with some flour tacos and filling made from leftovers. We’re both famished and it turns out to be the perfect dinner. We reach our anchorage just as the sun is setting, after a beautiful 2 hour run upriver, and end up anchoring with 3 of the 4 boats we locked up with. 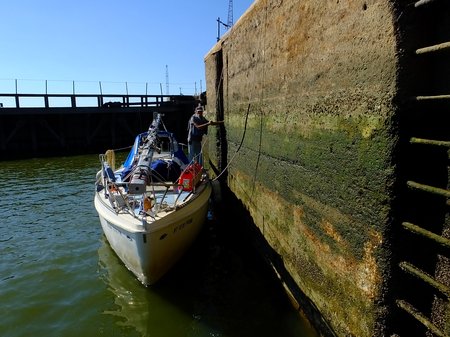 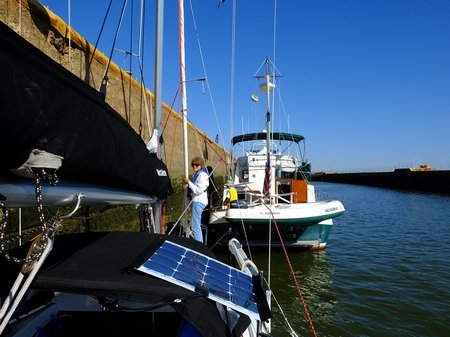 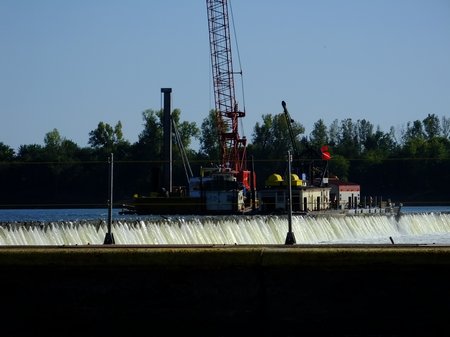 It’s been a lovely day, except for one thing. Our persistent problem with battery charging just won’t go away. Both ignition and house batteries refused to charge off the engine today. I got some charge into the house batteries with the solar panels, but the ignition battery stayed static until late in the day, when it started receiving a charge. These problems bewilder me, so I placed a call to Todd, and I’m hoping when we get to Green Turtle Resort Marina tomorrow I can dive back in and finally fix things. 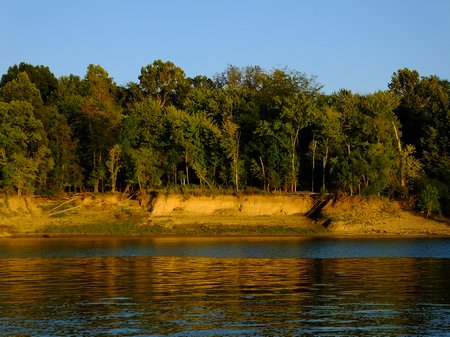 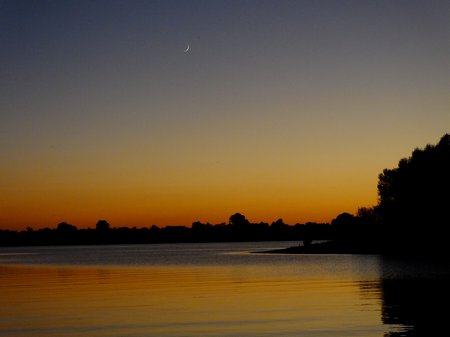