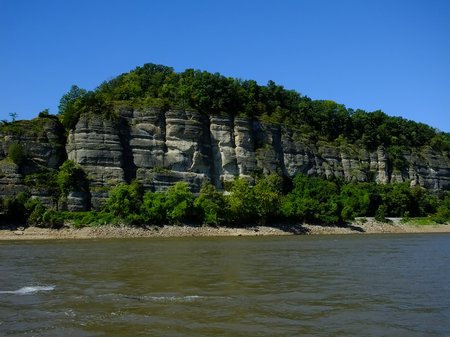 It’s 10 degrees warmer when I get up, and no fog has formed on the river. This sets us up well for a reasonably early start. We will try to 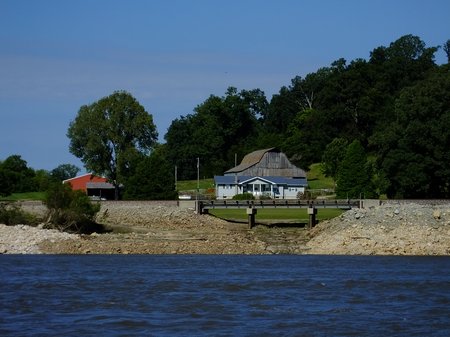 make a long run today, nearly all the way to the Ohio River, so that tomorrow we have a good chance of getting through the 2 Ohio River locks. Boats have been considerably delayed there of late, and we look forward to being in a good jump off position. The Waterways Guide indicates an anchorage 7 miles above the Mississippi/Ohio confluence, and that will be our goal. It’s a whopping 95 miles down river, but if we can average 9mph we should make it there by 5pm. We’re off the anchor and in the Mississippi current by 7am, and motoring into a brisk south wind. The sailboat who came in with us also gets underway and follows us downriver, matching our speed. I’m cruising at around 2500 rpm, which keeps us above 9mph most of the time. Early on, the river sweeps by some interesting bluffs on the Missouri side. It’s pretty empty country, with practically no boats except for the occasional tow, and 2 loop boats which pass us in the late morning. We pass a couple of small towns, and one small city, Cape Girardeaux, which is walled off from the river by a tall flood control wall. We tangle with another whirlpool, which tries to spin us around several times. The directional thrust of the outboard really helps. The south wind creates our biggest problems. Even though it’s only around 10 mph, it’s on our nose and against the flow of the river. This results in choppy water, and even whitecaps in places. The chop makes perfect hiding places for woody debris, ranging in size from small twigs to fair sized logs. Some float vertically, with just a few inches above the water. The debris is everywhere, and hard to avoid. It’s impossible to use the autopilot, so we steer manually 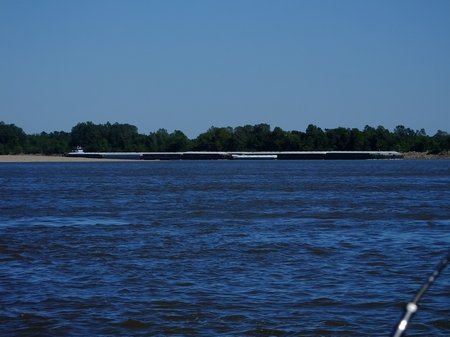 most of the day. In mid afternoon we close on a towboat who is pushing 21 barges upriver. We’re right at a tight hairpin turn listed as Dogtooth Bend. I radio him and he gives us the ok to pass between the barges and the river bank. There’s ample room, but whirlpools at 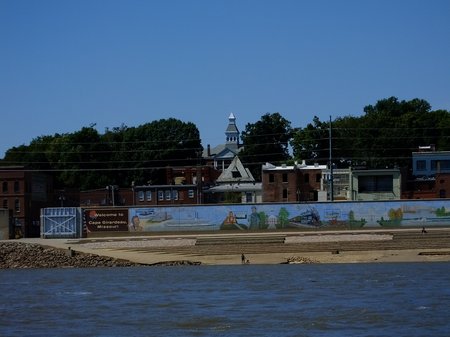 the bend don’t help. We’re really tired by the time we reach our intended anchorage. It’s a small inlet at the south end of Boston Chute, just above an interstate highway bridge. It’s not the best site, but should do. I radio the sailboat who has been cruising with us, and tell him I’ll go in and survey the depth, since he doesn’t have a working depth finder. It’s deep close in to shore, but the inlet shallows up quickly. It’s also fairly narrow, with just enough width to accomodate us. I figure I’ll go in furthest, since I’ve got the more shallow draft. I drop the anchor in a perfect spot, but in following us in, the other boat grounds and gets stuck. He tries, unsuccessfully to get off, so I pull up our anchor and take his stern line so I can give him a tow. It takes a strong pull, but he finally drifts free. I let him anchor first, and then drop in a spot at the mouth of the inlet. I’m glad to be securely moored. While I’m straightening things out, a power boat radios me. He’s out in the river, and desires to anchor her also. I tell him what I’ve seen for bottom depth, and he anchors between us and the bridge. He’s most considerate, giving our location more than enough clearance. I go into the cabin and check the house battery, and am perplexed to see it lower than I would have expected. I thought those problems were behind us. Sandy did run the laptop a good part of the day. I’m now wondering if the engine, running at low rpm, is capable of powering the gps, occasional autopilot, and steady computer. We’ll give tomorrow a try without using the computer and see what happens. 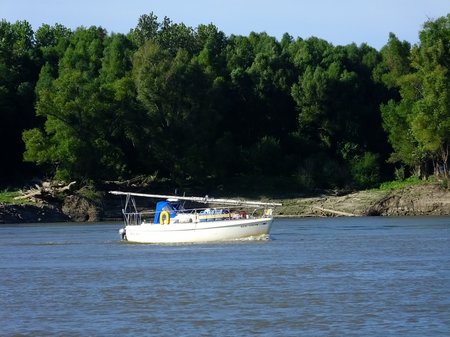