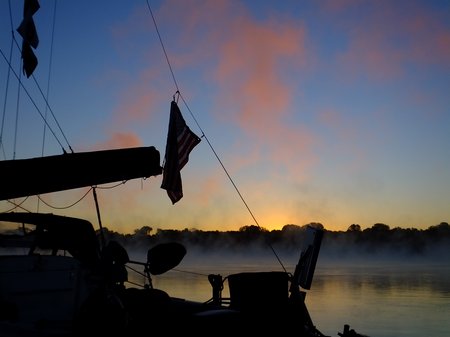 At yesterday’s cruisers briefing, Debbie said fog was likely for the next morning, and she cautioned against trying for an early start if fog 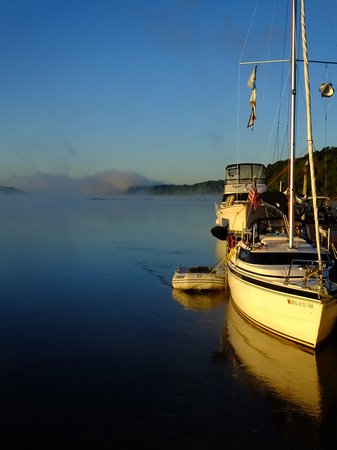 obscured the next corner downriver. It chilled right down after sunset yesterday, and after dark I got out my spotlight and was treated to a magical sight. The river was covered with wisps of fog, drifting with the current, and looking like cottonwood fluff in springtime back home. At 6am I rise, and am encouraged by the relatively clear view across the river. By the time I return from the restroom up the hill, however, I can see that those wisps of fog have tended to accumulate at the downstream river bend, piling up into a view obscuring fog bank. A tow boat rumbles upriver and I give him a call on the VHF. Sure enough, the fog is pretty dense downriver, so any plans I might have had for an early start are on indefinite hold. This give us an excuse to fix a nice breakfast. Sandy prepares an egg batter and we turn our leftover bread, from Tony’s in Alton, into some excellent french toast. As we are finishing breakfast the fog is lifting. We uncleat our lines and swing out into the powerful current at 9am, to begin our day’s run down the Mississippi.

Initially, the land on the Illinois side is low, flat and forested, while the Missouri side is graced with forested bluffs and steep limestone cliffs. Imposing homes are scattered along the crest of the bluffs. Further down river it becomes low on both sides of the river, still with dense forest. This stretch has a very remote, lonely feel to it. No highways are visible, just a set of railroad tracks on the Missouri side, but no trains come by. A few tows travel the river, not as many as in previous days, but they tend to be much bigger. We pass one tow working his way up river, 3 barges wide and 7 long, just two in front thus making for a 20 barge 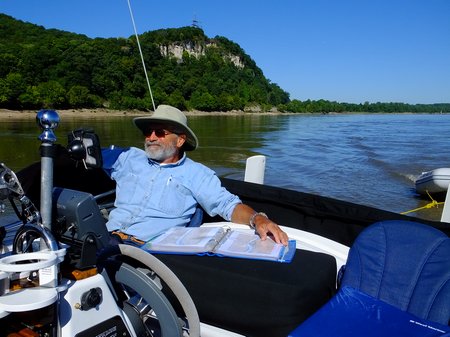 tow, the largest we’ve seen to date. It’s a beautiful day, brilliant clear blue sky and perfectly comfortable temperture. Sailing is out of the question since what little wind there is comes out of the south, right on our nose. The current is strong here. I set the engine at 2000 rpm and we average just over 8mph for the entire day’s run. It’s totally pleasant with the engine working so lightly, hardly any noise. On occasions, the current pushes us up to 9 and even 10mph where the river narrows or sweeps around bends. We pass whirlpool areas where we’ve been advised to not attempt passing tows. The whirlpools are noticeable, but not that severe. Kind of like Deception Pass back home about 40 minutes before or after slack. We pass by the first mooring option at Kaskaskia Lock around 1pm. We’ve come 41 miles at that point, but even with our delayed start it feels too early to stop for the day. Yesterday I talked with Ron, who’s also looping in a small sailboat, about anchorage possibilities, and he pointed out a spot at Rockwood Island, 17 miles past Kaskaskia. It looks promising, and we both decide to head there for the night. He leaves before we do, and when we near the place he’s nowhere to be seen. I swing in anyway, to investigate, and I give him a call on the cell. He says he’s just a mile below us and heading our way. We both have to take evasive action because a large tow, headed upriver, is in the act of passing another. Together they throw up big wakes and to top it off, we’re being pinched by a weir dam immediately downstream, and by a red channel buoy. I manage to clear the buoy and dam, but end up uncomfortably close to the wake of the nearest tow boat, which is laboring mightily against the current with his 18 barge tow. We get bounced roughly by his wake before being able to circle in toward Rockwood Island and our intended anchorage. I survey the depths and pick out the best possible area. We’re protected by weir dams above and below, but open to the river on our port beam. I figure the tows will give the weir dams a fairly wide berth, so we shouldn’t be bothered too much by them. We anchor in 9 feet of water, with 3mph or more of current sweeping by. We occasionally get bumped by driftwood. 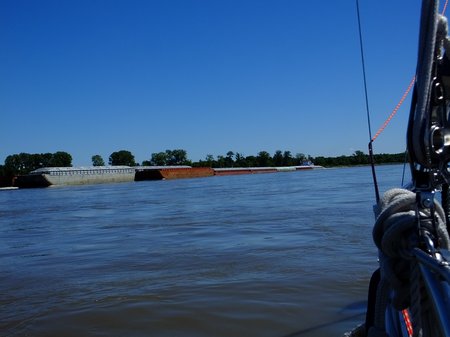 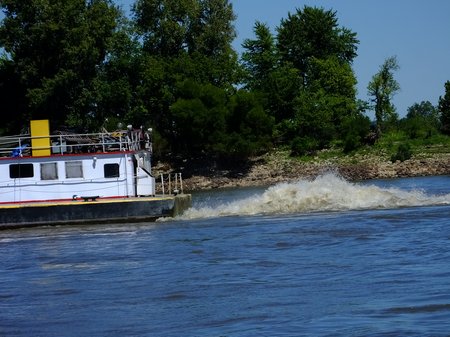 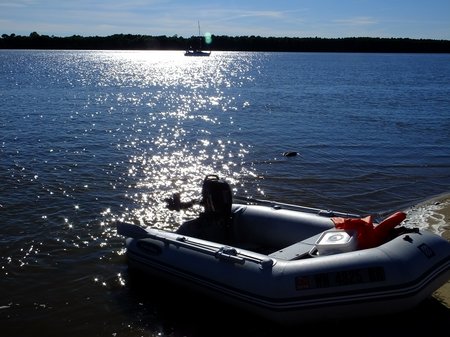 After securing the boat, I mount the kicker motor on the dinghy and Sandy and I go ashore to walk the beach. It turns out to be surprisingly interesting. The gravelly places have lots of colorful polished chert and even agate. We even find some nice seaglass – make that river glass. As the sun lowers it’s time to return to the boat. We enjoy chip and dip, washed down by rum cokes and follow that with a nice dinner of sloppy joes, enhanced with steak left over from last night’s dinner. Coffee and lemon cake, from the Kimmswick restaurant, finish off an very pleasant day. 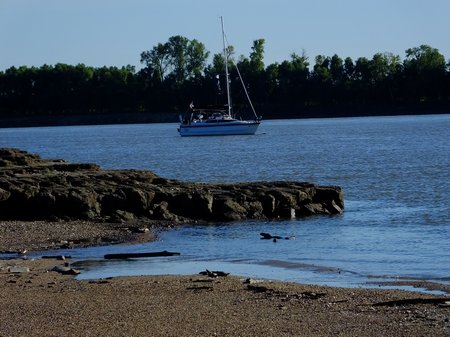