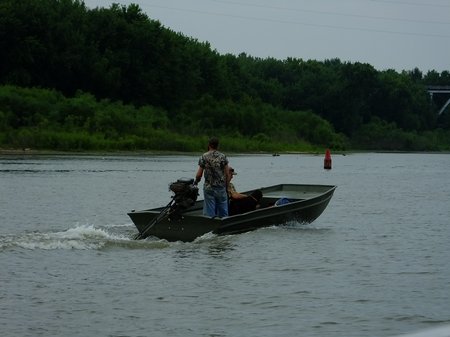 We’re up at dawn, as usual, and eager to get away from Henry’s Marina. Last evening I learned that some boaters have had trouble with gas bought at Henry’s fuel dock. I understand the tank was just recently filled, but I still worry about water in the gas. We’ll soon see how the engine runs. I hand line the boat out of the slip, not wanting to risk getting the centerboard stuck in the mud. The departure goes smoothly, and soon we’re back out on the river, headed south. The air seems encouragingly cooler this morning, with a thin overcast providing some welcome shade. We pass the town of Chillicote, but the run is mostly past forested shoreline, with large lakes hiding behind the bands of trees. Fishermen are out, but very little barge traffic. I see a guy in camo, with his boat loaded with goose decoys, heading into one of the side lakes, and finally hear a few muffled pops, some distance off the main channel. Apparently the undeclared truce between geese and hunters has broken down. Boating traffic increases as we near Peoria, and we even see a small fleet of sailboats in the big lake just north of Peoria. I phone a marina about space, and the helpful dockmaster suggests that we consider heading for the downtown docks, which are free and have electric power. I thank him for the tip and do just that. We put in on the north end, just above the big sternwheeler which is tied up to the main dock. I get a phone call from our friend Cindy on I think I can, who has seen us come 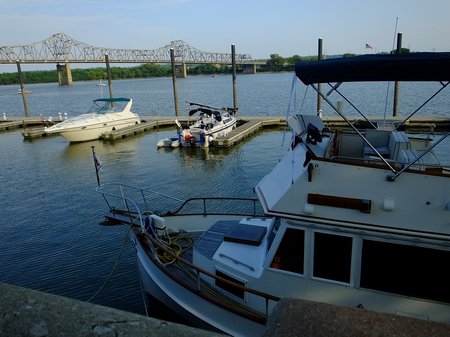 in. They are tied up, along with our other friends Joe and Marty, down on the south end of the town dock, downstream of the paddlewheeler. They say it’s a bit quieter there, so after lunch we move down and join them. It’s good to be near some Loop boats again. After getting squared away, we walk up into the waterfront downtown area. It’s beastly hot outside, so we head for the big air conditioned museum. We enjoy their planetarium program, walk through some interesting exhibits on the history of Peoria, and then see a 3d film on dinosaurs in the big screen theater. It’s around 5pm when we leave the museum and we’re starting to get hungry, so we walk across the street to Joe’s Crab Shack for a great seafood dinner. We follow that up with ice cream sundaes at a nearby ice cream shop. We enjoy our dessert at an outside seating area where we have an excellent view of the center stage performance venue, which features a major Blues festival. After listening for a while, we walk back to the boat. On the way we meet up with Cindy, who says she’s been able to reserve a slip for tomorrow at Havana, the next logical stop down river. We can call them in the morning and reserve a slip as well. This sounds like a good plan. We’ve gotten a nice taste of Peoria, and feel ready to resume our cruise down the Illinois River. 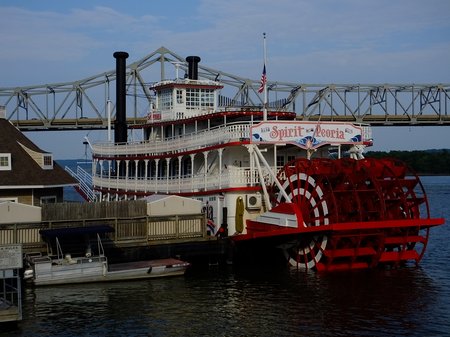 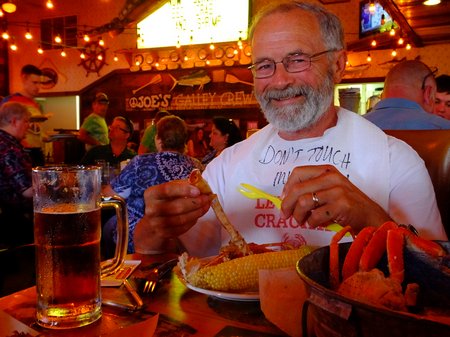 One thought on “Playin’ in Peoria”