Besides us, 4 other Loop boats are tied up overnight at the Joliet mooring wall. They include I Think I Can, Marquesa, Firebird, and Ren De Vous. We’re all up and ready to go by 7am. Cindy, from I Think I Can, phones up the Joliet Lock to see when they can let us through. They initially say 8am, which then changes to 8:30 and eventually 8:45. Just before we leave for the 2 mile run down to the lock, the big railroad bridge lowers for some reason, and everyone, including us, are to tall to clear the lowered bridge. Fortunately it raises in time for us to run down to the lock. The lockmaster tells Cindy on the phone that 2 boats will tie up to starbard and 2 to port. I decide to fender on the port side. When we near the lock, the guy on the radio instructs the two bigger boats to tie up on the starbard side, and the two smaller boats, including us, are to raft up to the big boats. So I quickly shift all my fenders to the starbard side and ease up to Joe on Firebird. It’s an easy process, and the descent goes 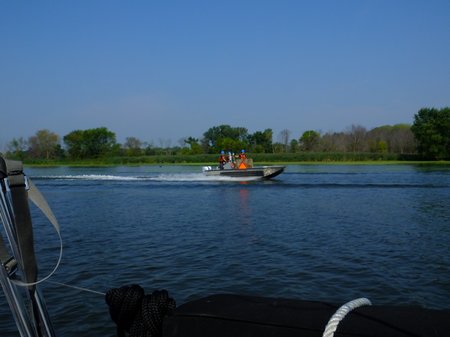 smoothly. Soon we’re on our way downriver again. It’s turning into a very warm day, and muggy too. The breeze we create with our forward speed is welcome. The shoreline we pass is heavily wooded, with occasional wide, shallow places alongside the main channel. Bright green duckweed covers large expanses of shallow water, and we see numerous duckblinds in the middle of the shallows. After a 12 mile or so run, we approach Dresden Lock. I’m cruising a mile or 2 per hour slower than the rest of the boats, so I’m last to arrive at the lock. Everyone is in a holding pattern, and I join in circling at idle speed, waiting for our chance to lock through. We’re held up for well over an hour, before the light turns green and we can enter. We’ve transited each lock with a Coast Guard buoy tender tow boat, the Sangamon, who gets the privilege of entering and leaving first. The next leg, down to Marseilles Lock, is 24 miles long, and I know that I’ll be well behind our little flotilla. I run a bit faster, around 8 mph, but they still travel a mile or so per hour faster than we do. I figure there’s a good chance they’ll catch a lock opening before we arrive. We begin to see more recreational boats, everything from high speed bass boats, motor cruisers, water ski boats, cigarette boats and jet skis. We reach the point where the Kanakee River joins with the Des Plaines River, and we’re finally on the Illinois River. The river widens, and I’m able to run the auto pilot for lengthy stretches. I stray to the edge of the marked channel and something goes “clunk” on the forward part of the hull. I actually feel it lift a bit. It doesn’t seem to be a damaging collision, and nothing hits the prop, so we cruise on. Must have been a deadhead, since nothing shows above the rather cloudy water. About 6 miles above the Marseilles Lock I give them a phone call to tell them we’re coming, and should get there around 4:30. The lockmaster says he’ll be able to lock us down with the Sangamon. I’m relieved to hear that, since that means we’re unlikely to have a seriously long wait. I cruise down the side channel toward the lock, and finally the lock comes into view. I give Joe a radio call, and he says they’ve just opened the lock doors. We motor into the chamber, and as we’re securing the boat to the wall, the lock doors begin to close. It was close, but we made it. After locking down, Cindy gets on the phone with Heritage Harbor Marina in Ottawa, and finds that they have space for all of us. It’s been an extremely hot, humid afternoon, and the marina’s prospect of showers and swimming pool sound extremely attractive. The place is quite new looking, very protected, and reasonably priced at $1/foot, with the Looper discount. Sandy and I decide to have dinner at their restaurant, and we’re joined by Joe and his brother Mick. We have a great time together, and end up being seated next to Ron, who we met up with back on Lake Michigan. That’s the way things work on the Loop. 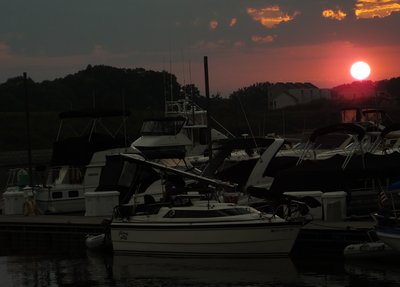 One thought on “Hurry up and wait for the locks”