We’re up early, and enthused over the prospect of our final driving day. It’s partly cloudy and breezy, and the air is cool. We eat a quick breakfast and, while getting the boat ready to roll, a lady swings by and says she’s posted us in Facebook. Apparently, camping in a sailboat isn’t all that common in this part of Iowa. We pull into the nearby truck stop and fill the tank, so we won’t run low on fuel as we drive past Chicago and make our final approach to Grand Haven. We pass through Davenport Iowa after a half hours drive, and then roll across the Mississippi. From here on in, we figure we’re in the eastern US. A short distance before we reach Joliet we take our first and only sightseeing detour of the drive. We’ve been paralleling the Illinois River, and I want to drive down and get a look at the 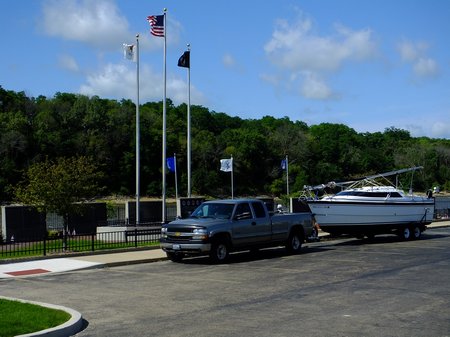 waterway we’ll soon be cruising down in our boat. We drive down through the little river town of Marseilles and stumble onto a very recently built memorial to the Mideast Wars, which is located right on the river’s shore. The grounds are nicely landscaped, with a flag pavillion and memorial wall with the names of fallen veterans. We photograph the boat on its trailer, with the river beyond. Soon after returning to the interstate, we actually cross the Illinois River at Joliet, and we shoot pictures of our upcoming route from the freeway bridge.

To say that the drive around the south edge of Chicago is hectic would be a major understatement. Traffic volumes build, extra lanes appear, and we cross major interstate routes linking Chicago with places like St. Louis and Memphis. I know it’s coming, but I still resent the fact that I have no choice but to stop at the upcoming toll booth and come to a stop to pay a toll for the privilege of driving an unavoidable 7 miles of interstate, just short of the Indiana border. My toll only comes to $2.60 but it’s the principle of the thing, having to come to a halt on a “freeway” to pay that silly amount. I feel like I’ve been robbed at gunpoint by a little punk with a capgun. A short distance past the toll booth we encounter a lengthy construction zone, which means we lose a lane and have to weave back and forth, right next to the concrete barrier. With semi trucks crowding in alongside at 65 mph, I just barely squeeze through. We finally clear the Chicago area. There is absolutely no place to stop for lunch, so we munch on snacks within easy reach in the truck cab and motor on. Rural landscape and reduced traffic volumes go hand in hand. The top if Indiana goes by quickly, and early afternoon finds us finally in Michigan, driving north and paralleling the shore of Lake Michigan. We know it’s over there on our left, but we never get a peak at it, since the tree covered dunes obstruct the view. We’ve lost another hour by when we crossed into Michigan. At 4pm Eastern Savings Time we arrived at our friends’ house in a little town just outside Grand Haven. Their greetings are warm and heartfelt. We are so relieved to have completed our drive. After 2,355 miles we have successfully towed our Great Loop boat to its starting point. 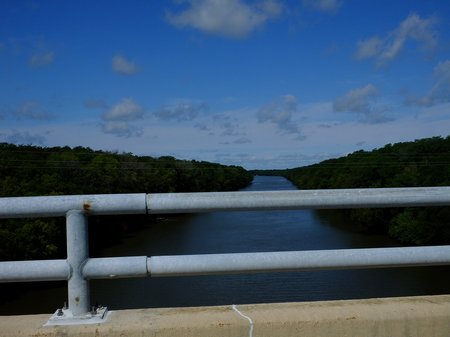 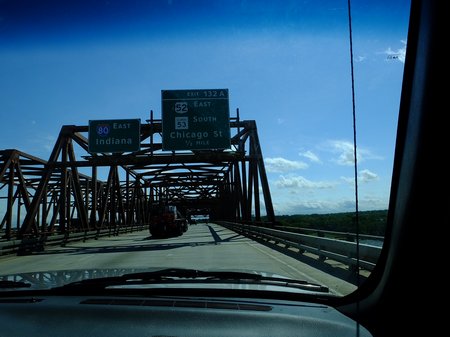