With the bleak high plains of southern Wyoming and the monotonous Nebraska plains looming ahead, we face the prospects of a long and likely boring interstate drive today. I rise at 6am, with the intent of getting a fairly early start. It’s quite chilly here in Rock Springs, around 45 degrees, so I fire up the stove inside the cabin, to warm things up. We eat a quick breakfast of cereal and pull out of the KOA at 7:40am. It’s clear and cool out, but without the stiff winds of the past 2 days. The landscape of southwestern Wyoming is arid and bleak, and for a long while we don’t even see any antelope. We cross the Continental Divide at an elevation of 6800 feet and drop into the Red Desert, a portion of Wyoming like the Great Basin of Nevada, where the streams have no outlet to the sea. We pass a vast open pit mine, probably coal, to the south of the freeway, and spot towering white plumes of vapor eminating from the stacks of the Jim Bridger Power Plant, which I assume is coal or gas fired. We cross Carbon County, and see our first operating oil well. Our route exits the basin near Rawlins, and we cross high plains to Laramie. We are now approaching the eastern fringe of the high plains, and as we begin to descend toward Cheyenne, we start seeing banks of low clouds, off to the east. We have seen this effect before, and I presume it is due to the warmer, more humid air of the lower Great Plains coming into contact with the cool, dry air of the high plains. The drop in elevation is noticable east of Cheyenne, and we descend into the cloud layer, eventually coming out beneath it as we cross into Nebraska near Pine Bluff. The forecast for today features a chance of thunderstorms, however, all we encounter is a light mist, just enough to operate the wiper blades. We make a quick fuel stop on the far side of Cheyenne, fix a lunch for eating on the fly, and drive on. 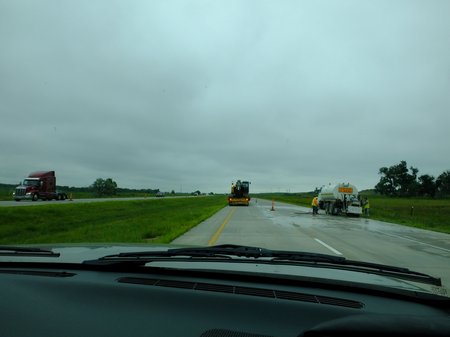 The drive across western Nebraska is tedious and uninteresting. Like most places, Nebraska certainly has her beauty, however, I’m sure it’s best seen up close and at a slow pace, as in walking along a stream or resting in the shade of a cottonwood tree. Cruising along at 70 mph on the interstate, with featureless cloud cover overhead, is certainly not the best way to appreciate Nebraska. The heavy semi traffic and frequent construction zone slow downs don’t help things either. In addition, we cross into the Central Time Zone, which means we’ll arrive at our eventual destination an hour later by the clock. I consider stopping at North Platte, however, opt to continue on to Kearney, where the map shows a State Park campground. Our Google Map app on the smart phone routes us right to the place, and it turns out to be a pretty area, with lots of vacant camp sites scattered out along the margins of a series of small lakes. We finally arrive at 6pm, local time. The place is lush with grass and nicely spaced shade trees. We back into a spot and set up for the night. Tomorrow we’ll take it easy, with a much shorter distance in mind. 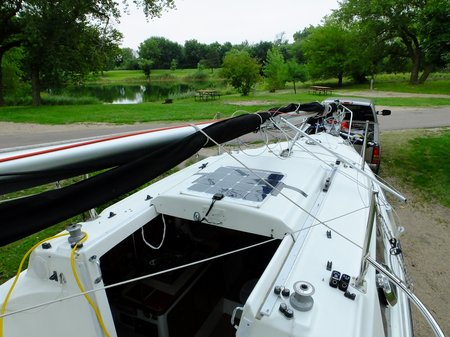