Long miles ahead today, and a noon time slack at Dodd Narrows, 30 miles away; both factors point to another early start. I’m up at 4:15, and find a warm northwest breeze blowing down the anchorage. Peter mans the helm, just to be safe, when I raise anchor at 4:45am. We raise the main and pay out the genoa, setting up for wing on wing, exiting Tribune Bay as thin clouds in the eastern sky begin to tint pink. The promise of a rolicking downwind sail on the Strait of Georgia seems fleeting, however, and before we’ve gone a mile, the breeze begins to fail. I roll in the jib and we push ahead by motor. I leave the main up, in hope of improved wind. About an hour later, wishes come true as the wind builds, setting up two to four foot following seas. We 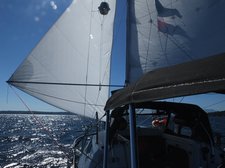 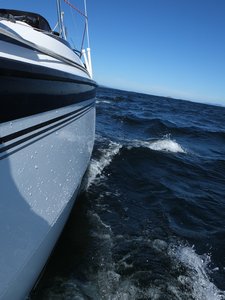 again set the genoa and main for wing on wing. I rig a preventer on the main and the whisker pole on the jib, and these measures cut down on flopping sails as well as the risk of a uncontrolled gybe.

As we near the Ballenas Islands I radio Winchelsea Control regarding our intended course near the Whiskey/Golf military exercise area. Whiskey/Golf is active today, but I see an inside route which appears to skirt the charted boundary. The controller replies to my call and assures us that our route is ok for transit. As we clear the islands we are able to alter course slightly, to westward, and this allows us to sail a near reach. Since we want to reach the approach to Dodd Narrows not later than 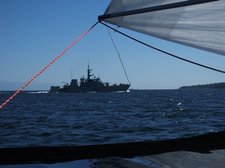 20 minutes before slack, so we can get a push through the narrows from the dying ebb, we must motor sail. We have enough wind to average close to 6 knots with the outboard turning only 2000rpm. Once we round into the broad bay in front of Nanaimo we are able to shut the engine off and sail again wing on wing, with a speed of 5 1/2 knots. About 3 miles shy of the narrows the wind eases, so we furl the jib and motor up. We encounter some unusual traffic on approach, in the forms of a Canadian Navy ship and a tug hauling a log raft. The naval vessel passes out into open water, but the tug is heades for the narrows. I’m glad we got there ahead of him.

Our timing works out perfectly, and we gain a 2 to 3 knot push through Dodd Narrows. On the south end we motor sail for a few miles before once again losing the wind. Near the north end of Thetis Island a nice breeze ruffles the channel out of the south. Since we have plenty of time to reach a reasonable destination, we opt to tack down channel for a while. The sailing is comfortable, with slight heel and speeds of 2.5 to 3 knots most of the time. Around 3:30pm we realize it’s time to find an anchorage. We had originally intended on going down to Prevost Island, however, we identify a promising little nook on the chart, just a few miles away. We motor over to it, and find it to our liking. We have it almost all to ourselves, while across the bay, close to 2 dozen boats are arrayed. It’s a peaceful place for appetizers, some mellow music, sausages on the barbque and just watching the day end.