I had originally planned on spending 3 days in the Bond Sound/Kwatsi Bay area, however, we didn’t feel like laying over in that area, and so had an extra day to play with. I flipped through Waggoners and Billy Proctor’s book, looking for an attractive place to visit before we head into Echo Bay on Wednesday. I ended up selecting the Burwood Group, a cluster of islands just 3 miles north of Echo Bay. They were enticingly described in both books, and it sounded like we would have a chance to do some fun dinghy exploration.

Since we didn’t have far to go, we decided on having one of our fancy breakfasts, consisting of french toast and sausage. We ate inside the cabin, since it was once again overcast and chilly outside, and we savored every bite of our tasty, hot fare. After breakfast I prepared to get underway. We said farewell to Kwatsi Bay at 9:30am and motored back out into Tribune Channel. 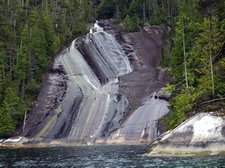 We soon came to the lovely and aptly named Lacey Falls, where a modest creek spills out onto a beautifully sculpted granite face. The water spreads out as it flows across the rock, tracing delicate contrasting streaks in its downward flow. As we cruised along, I was monitoring both emergency/hailing channel 16 and channel 66A, which the local marinas use. As soon as I heard someone talking with Echo Bay I gave them a call, requesting moorage for tomorrow and Thursday. The lady who answered took our names and boat name, and said they’d be able to accomodate our visit.

We reached the Burwood Group around 11am, and we slowly weaved our way through narrow channels and around small islands. We cruised slowly for two reasons: firstly, the scenery deserves being viewed at a slow pace, and secondly, my depth finder refused to wake up this morning. It’s been occasionally twitchy on a couple of occasions during this trip. Today, it insisted that our depth was 2.5 feet all the way from Kwatsi Bay to the Burwood Group. This is profoundly untrue, with depths of over 1,000 feet in places. By necessity, I watched for hazardous obstructions by zooming in on our GPS chart plotter, and also by watching for kelp patches and looking into the water. It is clear enough here to see down at least 20 to 30 feet. We poked into a couple of potential anchorages, but didn’t like what we were seeing. I decided to try one more location, and it proved to be a winner. We dropped anchor in a little cove, with a shell midden beach immediately to our stern. We had a stunning view back up Tribune Channel in one direction, and a nice view toward Echo Bay in another. 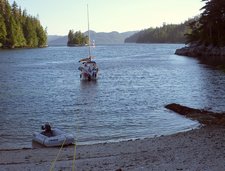 I anchored in the little cove, but decided it would be a good idea to rig a stern tie, since we had very little room to swing. I hauled our stern tie reel out from the back of the king berth, and while I was at it, I brought out our 4 plastic food tubs, since we had started running out of items in our small working food tubs. While Sandy sorted out groceries, I rowed ashore with the shore tie line, ran it around a small cedar, and then rowed back with the line. With the line tied off at the boat, I’ll be able to simply release it on board tomorrow and reel it in. I also good our accumated trash bags ashore, sorted out the burnables, and got rid of them with a small trash fire below the high tide line.

We ate a late lunch, and then climbed into the dinghy for our explore. We stopped to chat with a guy on a sailboat, which had moored on the other side of our little cove, and then headed across the narrow channel in search of a culturally modified tree. Billy Proctor’s book showed one to be located on this island, and he includes some rather cryptic directions on where to 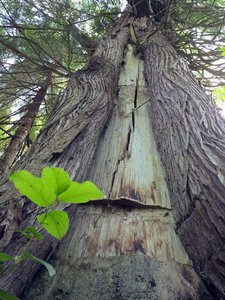 look for it. It was kind of like a treasure hunt. We looked for the most likely spot to land the dinghy, and the rugged shoreline didn’t offer many. I guessed right, and found some trail marking ribbon near the shoreline, which led along a rough, narrow path up a steep slope and into the woods. We hadn’t gone more than 150 feet up the slope before we saw the tree. It was a large cedar, perhaps 8 feet in diameter, and with a distinctive, tapering scar perhaps 3 feet wide at the base, and extending at least 25 feet up the tree. This scar had been made by aboriginal people, perhaps hundreds of years ago. The process involved peeling away the bark and then chopping horizontal cuts at both the bottom and the top of the exposed cedar wood. The high cut was probably done by standing atop a rough ladder of some sort. Then wedges were driven into the straight grained cedar and long slabs of cedar were split off. We were standing there looking at an historic First Nations lumber yard. The cedar slabs made in this fashion would have been furter split into boards which could be fashioned into houses and other structures.

We then dinghied around several small islands, enjoying the sunshine which, like yesterday, was gracing our afternoon. Soon it was time to return to the boat and prepare dinner. Todays menue featured venison tacos, and Sandy’s advanced preparation once again paid off. Another delicious meal in paradise. While she was busy cooking, I tended to a couple of minor repairs. I replaced a rubber cap on our swim ladder. We had somehow lost one, and I was pleased to find a spare among my collection of spare parts. Next, I tackled the digital refrigerator temperature display. It had quit working several days ago, and while getting some items out of the fridge, Sandy noticed that the wires on the temperature sensor had been kinked and damaged. I was able to splice the wires back together, and we once again are able to read the temperature inside the fridge. After dinner we went ashore and took a walk around our small island. A neat trail winds its way around the entire perimeter of the island. As we walked along we noticed at least 8 small to medium sized cedar trees which had bark strips removed from them. It was apparent that these trees were only asked to provide bark, with no wood having been chopped and split away. Some of the scars looked fairly recent, while others showed signs of healing along the edges, indicated that they had been done quite some time ago. We finished our walk by scrambling out across some granite boulders for a fine evening view of the surrounding channels, islands and mountains. 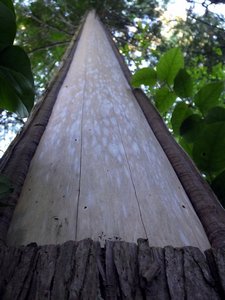 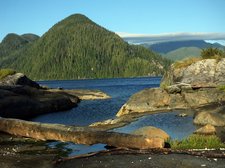