I was so encouraged by yesterday’s nice evening that I didn’t bother putting up the cockpit surround before we went to bed. Sure enough, in the middle of the night we were both awakened by the patter of rain drops. I figured to heck with it, and just let it rain on the open cockpit. The rain continued for the rest of the night, and it was still coming down when we woke up this morning. Rain drops outside are a great incentive for a slow start to the day. When we finally did get up, we enjoyed coffee and steamed cinnamon buns which we’d brought with us from Port Harvey Marina. They tasted great. By the time I was ready to run out in the dinghy to pull the crab trap, the rain had eased to a light drizzle. All I managed to catch in my trap were 3 sunstars. Our crab dinner will just have to wait. 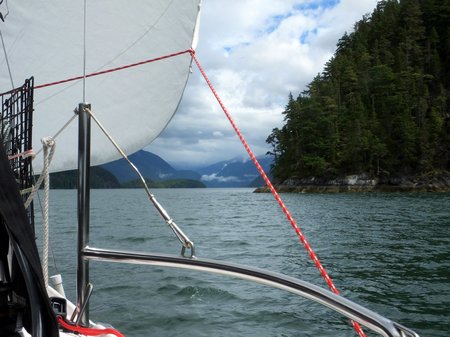 By the time we got underway, it was already 10:15, but we didn’t have that far to go, so no worries. We motored out from behind Minstrel Island and headed across Knight Inlet. It was quite bouncy out there, with a fresh breeze out of the east kicking up swells on Knight Inlet. The wind was mostly on the nose, so I couldn’t raise sails. Our course then took us up Tribune Channel, where I was able to motor sail in a following breeze. It’s hard to figure what the wind will do in these narrow channels and inlets. The sun started to break out around noon, and our trip up Tribune was enhanced by large numbers of harbor porpoise, which were actively feeding. We saw several leap completely out of the water.

Some came to the surface right next to our boat. They were a delight to watch. Around 2pm we rounded a point and entered Bond Sound. The scenery is dramatic here, with snow patches lingering on the higher peaks and shear rock cliffs all around. Waterfalls trace narrow white streaks down the mountainsides. In places, the forest is scarred with landslides where the soil and trees have broken loose, starting high on the slope and extending all the way down to the sea. These slope failures have scoured right down to bedrock. 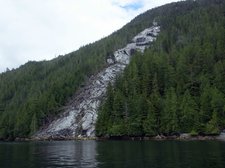 Anchoring in Bond Sound is complicated by deep waters which extend nearly to the head of the Sound. A river and a creek enter Bond Sound at its head, and they have built up an extensive shoal, studded with driftwood snags, and at the edge of this shoal the bottom drops off quickly to several hundred feet of depth. We managed to set the anchor in the narrow band of useful depth, in around 30 feet of water at low tide. This put the boat fairly close to the mud flat which is exposed at low tide, but we found enough room. I went to the trouble of rigging a trip line float on the anchor, because of the logs and snags which were evident in the area. Hopefully, the anchor will pull without fouling tomorrow, but if it does, I’m hoping the trip line will work.

After we were secure I set out the crab trap. Then we enjoyed rum cokes while listening to the CD we bought at Port Harvey. The artist calls himself Cap’n Charlie, and he sings Jimmie Buffet style cruising songs, some original. He’s quite good. We were told that he’s a retired school teacher who regularly cruises these waters. He plays at the marinas, and he distributes the profits from the sale of his CD’s to the local marinas. Pretty cool. 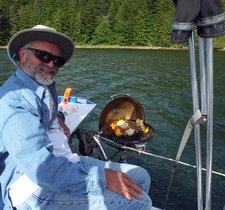 For dinner we barbqued pork, onion, and fresh pepper kabobs which were delicious. Then we hopped into the dinghy for an evening explore of Ahta Creek estuary and the mouth of the Ahta River. High tide is at 9pm today, and so we were able to go a good distance up both of these inlets. They were magical places. At any moment we expected a wolf or bear to step out of the woods. After taking Sandy back to the boat, I ran out and checked the crab trap. Just one small male crab in the trap. I freshened the bait with some mussels I had gathered at low tide. Maybe after sitting overnight, I’ll have some luck. Night is now settling in. The afternoon breeze has completely died, and our somewhat exposed anchorage is calm. We have this special place completely to ourselves. 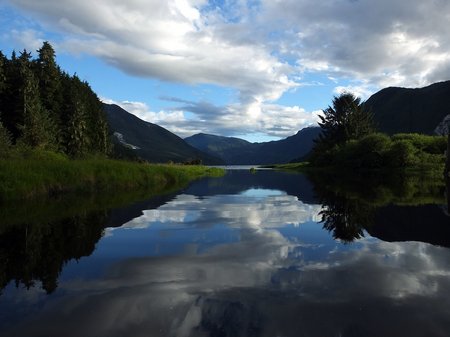