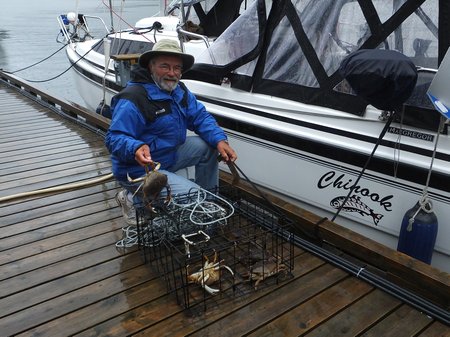 It rained most of the night, and was still raining when we got up this morning. We went up to the restaurant at 7am, and George was busy in the kitchen. He served up our preordered cinnamon buns, nicely warmed and delicious with a cup of steaming coffee. After breakfast I walked down to the end of the dock, where I’d dropped off my crab trap yesterday evening. I hauled it up, and was surprised to see 5 dungeness crabs scurrying around, inside. Some of them looked big enough to keep. I got my regulations booklet out and checked the size limit for dungeness. Then I took my crab caliper, which is marked for the Washington State size limit, up to the restaurant, so I could get it measured for the Canadian size limit. Crab here need to be 1/2 inch wider than in Washington. Back at the trap, I hopefully measured the largest crab. Darn! It was 1/8 inch too small. Back into the water with it, along with the others. George later helpfully suggested that those crabs which are just undersized can be made a little bigger by stepping on them. As much as I love crab, I’m convinced that completely legal ones really do taste better.

We puttered around the boat with little chores, not getting underway until around 10:30am. This was partly due to the rain, and partly because we needed to transit Chatham Channel, which runs around 3 knots with the ebb and flood. It was predicted to change to ebb at 12:30pm. Our late departure would enable us to catch the start of the ebb, and make the run to Lagoon Cove a little less difficult. It rained off and on for the first half of the trip, and the wind kicked up a bit, mostly on our stern. I was able to run out the jib and benefit from a push as we went up Chatham. The wind and current continued to favor us as we rounded the corner and into The Blow Hole, another narrow channel. Just past the Blow Hole is the entrance to Lagoon Cove Marina. I called them on Channel 66A, which is the channel all marinas in this region use for hailing. The lady answered right away, recognizing us as a MacGregor 26X. We were expected. How nice. We pulled up to the fuel dock, and after taking on gas, the lady gave us an informative orientation on the facilities and how things work here. In the midst of her spiel, another boat showed up, wanting to get in to the fuel dock, so we quickly untied and moved over to our mooring spot. I had to back in, around the bow of a large motor yacht, but with lots of hands on the dock to take lines, we got safely secured. 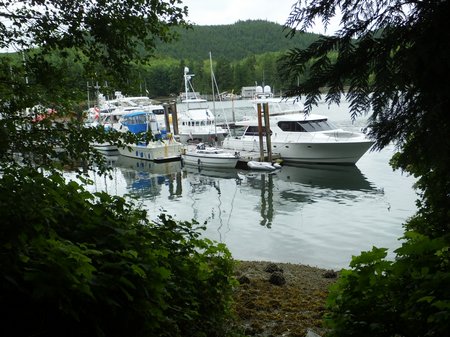 This is another unique and interesting place. I got some tips on crabbing spots, and some bait in the form of prawn heads. After running the crab trap out to, hopefully, the perfect location, Sandy and I went for a walk in the woods and through the property. Very nice trail, which featured an adult swing, with very long ropes. Toward the end of the walk, we encountered the exercise stations. The first consists of a big woodpile, with a splitting maul and a sign with 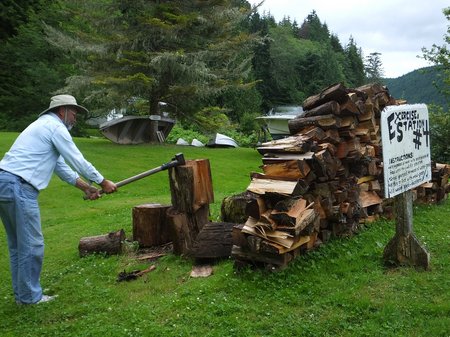 instructions. The second was a push lawn mower, also with humorous instructions. After our walk, we had just enough time to visit their “emporium” where we picked out a pair of monogramed denim shirts. Then, Sandy put our contribution to the pot luck on the stove for warming. She had come prepared for this potluck, and had prepared a tasty dish, cheesey chicken natcho dip. The potluck is a daily tradition here, and is lots of fun. Everyone 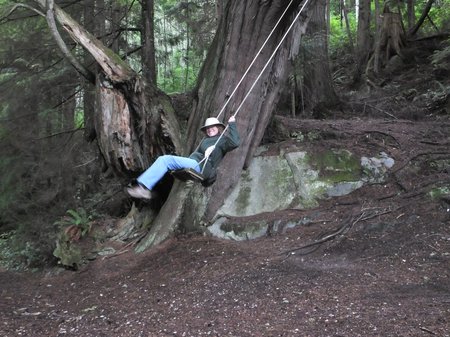 participates, and both food and conversation are most enjoyable. One of the marina operators tends prawn traps, and a big pile of fresh prawns were available on the buffet table. Shells just go over the railing and into the bay.

Tomorrow we’ll head away from the marina scene for a few days exploring some interesting bays to the north of here. I’m hoping that I’ll be able to catch a few fish, and maybe trap some crabs.