Not quite so early a start today, with a planned run only half as long as yesterday’s. Still, I got off the anchor at 5:30am, after taking a few minutes to untangle a mess I’d made yesterday. I had tried setting up a trip line on a float, however, the trip line managed to foul itself on the anchor chain, and then to complicate things further, it managed to get crossed up with the centerboard. Fortunately, I was able to undo things without too much difficulty, and we were off, on our way toward Johnstone Strait. We had a good run, with conditions on the Strait virtually calm. We were grateful, since this stretch of water has a nasty reputation, when it gets windy.

The morning was chilly, and I wore my polar fleece over jeans and jacket for the firt time. We got a little sun early, but then it clouded up and by the time we arrived at the Port Harvey dock it was starting to rain. 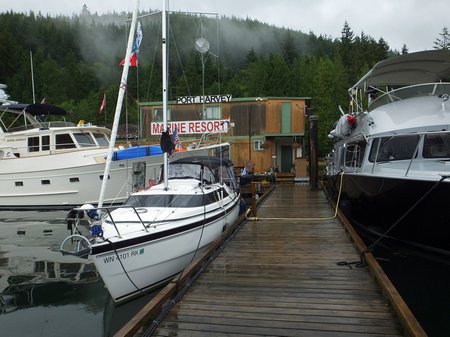 I quickly deployed the cockpit surround, met up with George, the proprietor, and we settled in. He told me that a guy yesterday had caught 4 legal crabs right off the dock, so I put the trap together, baited it up with some outdated crab meat George gave me, and dropped it in at the end of the dock. I checked it a few times, and it came up empty each time. During a lull in the rain, I walked over to the low tide flats and dug up some clams, to freshen up my bait. Despite the enhancement, the trap came up empty each time I checked it.

We did a little shopping in their small store, which contains a remarkable variety of items. We also signed up for a pizza dinner at their restaurant, and ordered some cinnamon buns for tomorrow’s breakfast, plus two extra to take with us.

When we arrived around 10 am we were the first boat in. A 31 foot Catalina sailboat was close on our heels. Boats continued to arrive over the course of the day, and by mid afternoon, the docks were 3/4 occuppied. We were able to log onto internet, and catch up on email. I inserted pictures for several early journal entries, but when I tried uploading them, the internet connection quit, so I’ll have to wait until a good connection is available, before posting. Apparently the rain interferes with reception. 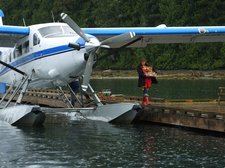 Dinner was great. The restaurant is called the Red Shoe Restaurant, and if you give them a red shoe, you get a free dessert. We didn’t have any red shoes to spare, and it was just as well, since after eating our pizza we were stuffed. It was excellent. We shared table with the couple from the boat, Ad Libitum, which came in just after us. Nice folks, from Anacortes, who are cruising the Broughtons like us. We may well see them again along the way. Following dinner, we cozied up in the cabin and watched a rented movie, which made for a nice end to a drizzly day.