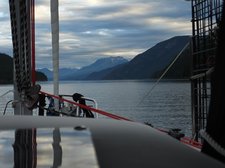 Up at 4:15am this morning so we can be underway by 5. I’ve been able to wake myself for 5:30 departures, but I set the alarm just in case, and it was a good thing. It was important to start early, since we needed to be at the entrance to Yaculta Rapids by 8:30am. I had earlier calculated that, with a 5am departure and averaging 5.7 kts, we would be positioned just right. We were all by ourselves at first, but soon other boats began showing up from various side channels, all with the same plan as ours; namely to pass Yaculta and Gilliard Rapids 30 to 45 minutes before the turn from flood to ebb, and then transiting the potentially hazardous Dent Rapids right at slack. As we neared the entrance to Yaculta, we found ourselves in the midst of a small fleet, around a dozen boats, both sail and power, all forming into a loose single file line and heading on through. This morning just happened to be a small tidal swing, so the current effects were less than is sometimes the case. 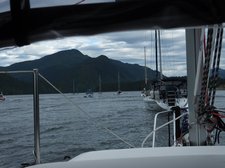 We took advantage of backcurrent eddies below Yaculta, and then bucked a 3 kt current in Yaculta and Gilliard. After clearing the Gilliard narrows, the current eased, both with the wider channel and with the nearing of slack and the reversing of current. Several luxurious resorts look out over this stretch of channel. It’s also popular with bald eagles. We spotted one tree with dozens of eagles perched in its branches. I would have taken a picture, but I would have lost my place in the parade of boats passing through.

As it was, we timed Dent perfectly, and then continued onward, anticipating the start of the ebb, which would give us a welcome push toward Greene Point Rapids, 13nm further along. I tried to maintain 6.5 kts so as to reach Greene Point near its slack. We arrived on schedule, but found several knots of current running, fortunately in our direction of travel. We enjoyed the push, and watched the little eddies and whirlpools which spiraled along on the water surface. Harbor porpoise seemed to find the turbulent currents to their liking. A group of 6 or 7 of them engaged in frisky feeding activity along the edge of current lines and boat wakes. We just missed seeing a black bear on an island beach. A boat ahead of us reported the sighting on his VHF radio, but the bear had retreated into the brush by the time we passed by.

Ominous sounding Whirlpool Rapids was the final hurdle in today’s passage. We reached it at 1pm after a quick passage down from Greene Point, thanks to a strong ebb current. Whirlpool was running around 3 knots, but posed no difficulties. For some time along this stretch, I had been monitoring the radio, listening to other boats talking about where they were headed. It seemed that most of the fleet was planning to stop at Forward Harbour, just as we were. Before starting the trip, I had identified this place as a strategically well placed anchorage, just past the 5 tidal rapids and just before notorious Johnstone Strait, which is usually best run in early morning. It seems that nearly every other boater in this corner of BC has also figured this out. I speculated on finding about 4 other boats anchored there by the time we arrived. When the anchorage came into view, I counted 10 other boats already tucked in. It was challenging to find a spot, but I used the old MacGregor trick of moving further in than the rest of the fleet, and we finally got our spot. After a short nap we dinghied ashore and walked a rough trail over to the bay on the other side of the penninsula. By the time we returned, a total of 21 boats were swinging at anchor. Dinner consisted of a delicious stir fry: fresh sliced peppers and onions, left over slices of pork loin, served over rice and flavored with a savory Korean spicy beef stir fry sauce. 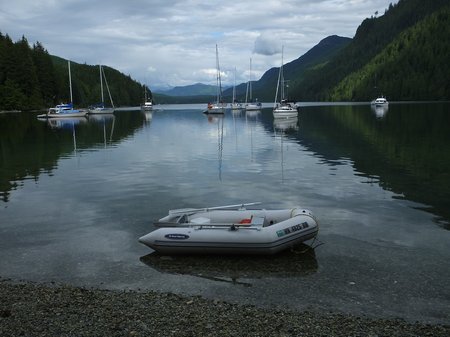 Tomorrow we’ll start moderately early, perhaps 6am, for the run up Johnstone Strait and a welcome stop at the Port Harvey Marina, where we’ll take a slip. We understand that they celebrate the 4th of July there, so we intend to represent the good old USA.