I’m up at 5am again, and off the dock at 5:30. It’s oddly mild out, and the second morning in a row with no dew in the cockpit. Despite the fact that today’s run is relatively short (only 26nm), and even though strong, favorable southerly winds are in the forecast for later in the morning, we’re off early again. The reason is because we have a lot of chores to attend to at Refuge Cove, and the earlier we get there, the better. 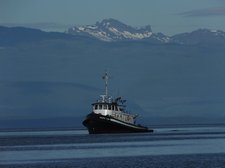 The water is glassy smooth for the first 10 miles, but around 7:30 or so the apparent wind begins to shift to the west. I raise the main and run out the jib, in hopes that I’ll be able to do some downwind sailing. The wind remains light all the way to the middle of Malespina Penninsula, but finally, the breeze picks up enough to do some wing on wing sailing. The run through Thulin Passage, past the Copeland Islands, is very scenic. Our previous trips up this way, skies have been overcast, but today, the sky is blue, the sun bright. We motor sail around Sarah Point, and the stunning view of Desolation Sound reveals itself. We cross the Sound in bright sunshine, on slightly choppy waters, with a nice sailing breeze taking us the final mile over to Refuge Cove. 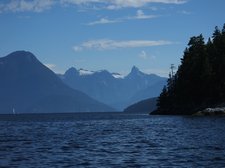 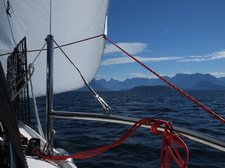 We expected to find the place swarming with boats, however, things were decidedly low key. Just a couple of boats at the fuel dock, where we first headed, but fewer than half a dozen at the mooring docks. I filled our two 12 gallon tanks, taking on a little over 20 gallons. I was really pleased to have gotten this far without having to tap our 10 gallons of reserve supply, which is contained in 3 plastic gas jugs. With the sailing and motor sailing we’ve been able to do, plus good timing of currents, we’ve been able to average 8.5 miles per gallon.

Once we tied up at our mooring slip, the chores began. Groceries, ice, and fishing license must be purchased and stowed in food tubs and coolers. Laundry has to be gathered and carried up to the laundry room for washing, drying, folding, and stowing. The water tank has to be drained, disinfected and drained again, before finally filling with fresh water. While Sandy works on laundry, I’m hauling the deflated dinghy out of the gear stowage area under the cockpit. It must be inflated, rigged with towing bridle, and set up with oars, lifejackets, and dinghy gear container. Then the entire aft stowage area must be reorganized. The entire process is made all the more taxing by a surprisingly hot day. We’re finally almost done, and we’re both very tired.

Tomorrow will be our final big push, and the longest run of the trip. We plan on covering more than 50nm, running past 4 sets of tidal rapids. I’ve worked out a schedule which will enable us to pass each rapid at optimal time, and taking advantage of an ebb current for much of the day. The weather is forecast to be fair once again, so we’re looking forward to this run. And after tomorrow, we will be in the vicinity of the Broughtons, with a much more leisurely schedule in the offing.