I expected this to be an easier day, with 11 miles less to cruise. I checked the current tables last evening, and saw that Dodd Narrows was slack at 12:20 pm. I figured to start at 7am, and try to arrive at the Narrows an hour before slack, riding the flood current through, and setting us up nicely for an early afternoon arrival at our planned anchorage. I raised anchor at the appropriate hour, and we set out on glassy smooth waters. 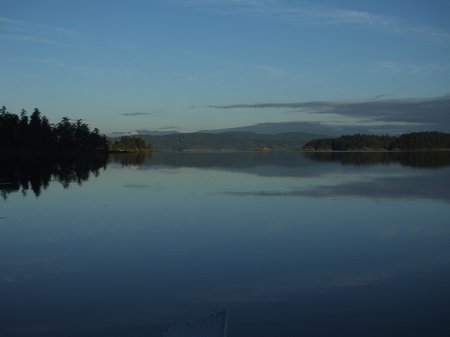 While cruising along at 5.5 knots, the proper speed to get us to Dodd by 11:30am, I decided to take a look at the tide table which is available in our Garmin GPS. To my surprise, we were on a falling tide, instead of the flood. I grabbed the current table book, and discovered that I had misread the tables, reversing flood and ebb. I didn’t want to fight my way against current in Dodd an hour before slack, so I throttled back and we took our time motoring toward the Narrows. Shortly before reaching the Narrows, I switched fuel tanks, since the one I’d been running on ever since we left Oak Harbor was nearly empty. We had been able to make 93 miles on those 12 gallons. We neared Dodd just past noon, and joined a substantial parade of boats who were likewise timing their passage with the slack.

As we entered the Narrows the wind began to pick up, and before 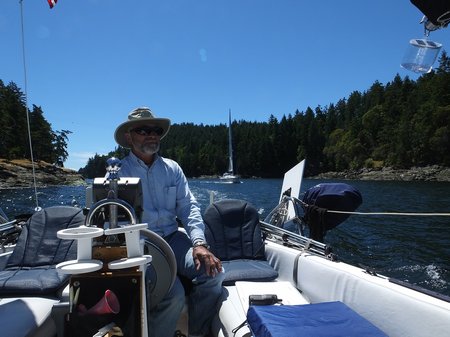 we cleared the Narrows, it was blowing briskly on our nose. We bounced our way against increasing chip, into Northumberland Channel and the approaches to Nanaimo. From there on, the wind was blowing about 15 knots, on our nose, and kicking up a bouncy 3 foot chop. This slowed our progress to around 4.5 knots and delayed our arrival at Nanoose Harbour until 4pm. We dropped anchor just behind the sand spit on the south side of the bay, and are currently sitting comfortably under clear, sunny skies and a pleasant light breeze.

I can’t close this out without recording a brief mention of a gift we were given last night. I discovered it today, when I lifted the steering seat in preparation for switching fuel tanks. In the middle of the night I thought I heard movement on the boat. In my half sleep I told myself it must have been a bird, or maybe I imagined it. I also recalled the comment by a Canadian MacGregor owner who had attended the rendezvous. He said to never feed the otters, because they’ll come aboard your boat and make a terrible mess. Well, when I lifted the steering seat I looked down and found my gift. Lying there, sweet as you please on our stern platform was a large kelp blade and two other strange looking masses. Upon closer examination, the larger clump was the head and guts of a sculpin. I didn’t try very hard to figure out what the second pile was. I hated to seem ungrateful, but we really couldn’t use these gifts, so I scraped them overboard. Not certain who our benefactor was, but otter seems to be most likely.