I had planned on a long run for our first day, so an early start was key. I got up a little before 5, got dressed, turned the coffee water on (I love the reliable start on that new stove), and made ready to get underway. I released the dock lines by 5:25am and we idled out of Cap Sante Marina. One other rendezvous attendee was up at that hour, and he gave us a farewell wave as we quietly glided past the boat slips.

The sky was overcast, with a light breeze out of the south. It is already daylight at 5am around here at this time of year, but I had turned the running lights and steaming light on anyway, to enhance our visibility for the first hour. We were the only boat moving as we exited Guemes Channel and headed across Bellingham and Rosario Straits, on our way toward the San Juans. We ran up the east shore of Blakely Island against a slight ebb current, but got a nice 3 knot push in the narrow Peavine Pass, between Obstruction and Blakely Islands. We threaded our way through the San Juans, exiting via Spring Passage, between Jones and Orcas Islands. As we entered the more open waters of Boundary Pass, I unfurled the genoa to take advantage of a southerly breeze. We motor sailed at a speed of 5 knots, with the engine turning at around 2000 rpm.

Several light rain showers spattered us during the course of the day. In between, teasing sun breaks brightened the waters. We crossed the U.S./Canada boundary at around 11am. I hoisted our yellow “Q” flag, signifying that we were a foreign vessel which had not yet cleared Candadian Customs. Just before noon we entered Bedwell Harbour, South Pender Island, and made for the Customs dock. We tied up there. I grabbed our passports, boat registration, and note pad, walked up the ramp to the Customs office (which was unoccuppied), and picked up one of the telephones there, to announce our arrival. The Customs official was very official. All she wanted to know was our names, our boat’s registration number, how long we planned to be in Canada, the purpose of our visit, and whether we had any alcohol, firearms, or animals on board. My answers seemed to satisfy, since she gave us our clearance number without hesitation.

With that in hand, we were free to proceed with our Canadian cruise. As we were leaving, 4 or 5 other American flagged boats were heading for the Customs dock. We felt glad we’d arrived when we did. Out in the open waters of Swanson Channel the southerly breeze had picked up to around 10 knots, so I raised both main and genoa, and we were able to shut down the engine and sail for nearly an hour, while eating our lunch. Unfortunately, the wind didn’t hold, and so I started the engine and we motor sailed for a couple hours. This brought us to the Montague Harbour entrance shortly before 3pm. We passed up the crowded main harbor, and rounded Gray Point. A handful of boats were anchored in the small bay behind the point. 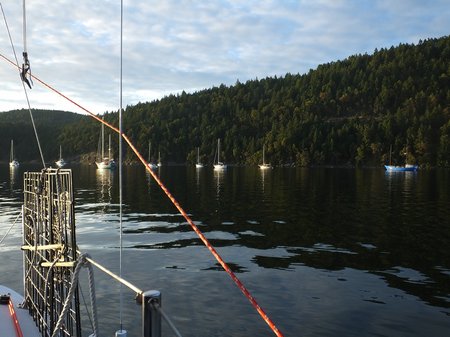 We picked out a nice spot in the lee of the tallest trees on the point, and well inside the other boats. After tidying up the sails, it was cocktail, reading and nap time in the cockpit, followed by a tasty dinner of rice and barbqued pork loin chops. We are now gently bobbing in 15 feet of water as the sun eases its way down. The broken clouds and open view to the west may treat us to a nice sunset. A group of young people have gathered on the beach to watch the sunset develop. 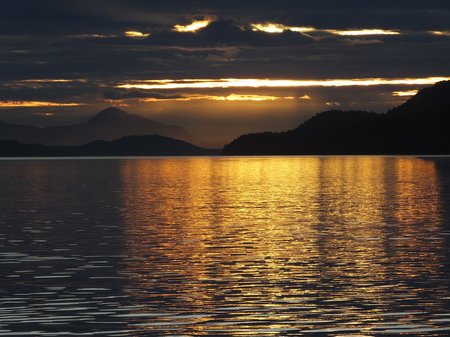 The weather pattern appears settled, so we have hopes of more sun tomorrow. We don’t have quite so far to run. We will pass through Dodd Narrows, and the tide and current schedule appear favorable for our northward passage. 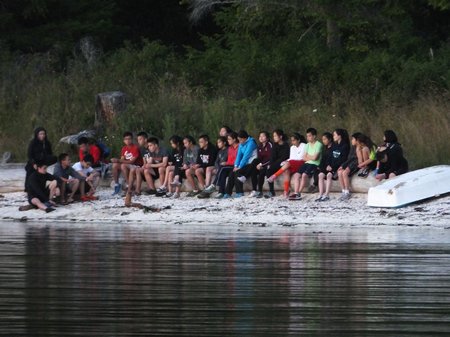