I rose early, eager to get underway. I’d been too tired to check current tables the previous evening, so I turned the Garmin on and opened up current predictions for Deception Pass. It showed a slack tide at 8am. I wondered if we could make it in time. I quickly calculated the distance to be around 20 nm, and concluded that, if Cattle Pass and Rosario Strait weren’t too rough, we could just make it by running full throttle all the way. I raised anchor, slowly motored out of Fisherman’s Bay, opened the water ballast tank valve, and ran the speed up to wide open. The waters of Lopez Bay were glassy smooth, and our speed gradually increased as the ballast water drained out. We were soon cruising at 13 to 14 knots. I found the experience stressful and unpleasant, after so much time cruising at 6 knots or less. The bow was high, and difficult to see around, with the dinghy stowed on the foredeck. I couldn’t stand upright, because the bimini and cockpit surround were still set up. There was just enough floating debris in the water to compel constant vigilence, so I alternated between standing with my neck bent, and sitting on the port side, peering out along side the boat. I found steering more difficult when sitting over to the side, and so favored positioning right behind the wheel.

Cattle Pass, which separates the south ends of Lopez and San Juan Island from the Strait of Juan de Fuca, is rather shallow and narrow, and can be extremely 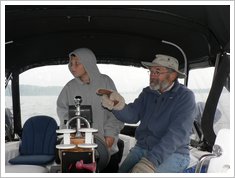 rough when the tide is running. We found only one knot of current there, but it still made for a rough exit. I steered well off shore, to avoid the small islands which dot the southern shore of Lopez. Once we were able to make the turn east, things settled out, with the slight swell and breeze at our stern. Our speed gradually increased to 15, and even briefly, 16 knots. Overall, I was pleased with the performance of the engine at these speeds. It was running at 6000 rpm. The over-rev alarm never triggered. I did notice, however, some periodic missing in the engine. I’m not sure what that means, and I’ll have to ask Todd about it.

My distance and speed calculations were on the money, and we reached Deception Pass right at 8am. We cruised through just as the ebb current was beginning to flow. Once inside, I eased the throttle back to the more familiar and comfortable speed of 6 knots, and we motored across the glassy surface of Skagit Bay, following the eastern shore of Whidbey Island toward Oak Harbor. We tied up at the Oak Harbor Marina boat launch dock around 11 am. Our San Juan and Gulf Islands cruise had reached its end, as all cruises must. 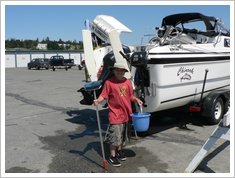 I hitched up truck to boat trailer and pulled the boat out, curious to see how much marine growth I’d accumulated on the bottom of the hull. At first glance, it looked really fouled, however, it turned out to be very easily cleaned. I hosed it down, and then scrubbed it with the soft blue deck brush. The slimy growth easily rubbed off. I found no hard growth at all, and so had no scraping to do. There were a few tiny barnacles just getting started (1/8 inch or so across), and they readily brushed off. The bottom of the dinghy had no growth whatever. I’d coated both the boat hull and dinghy with antifouling wax before the start of the trip, and after 32 consecutive days in salt water, I am certain that the wax helped considerably, both in retarding the establishment of growth, and in easing its removal with the soft brush.

After cleaning chores were done, I phoned up Boat US insurance, to begin the claim process for dealing with the broken mast. The fellow I got on the phone was helpful and efficient. I next called Todd to arrange for dropping the boat off, in preparation for getting repairs done. Sandy and Cameron stowed gear and got us ready for the road while I was on the phone. Soon we were on the road, headed for our son’s house in Snohomish. We would have the balance of the day, and first half of the next, doing laundry, organizing gear, and sharing stories about the trip. After lunch on the following day, we would drive to the airport and meet up with Cameron’s mom and little sister, who will be flying here from Hawaii, eager to reunite with their son and brother and hear all about his remarkable island adventure.