This morning the air was chilly, and a sharp breeze was ruffling the waters in our anchorage. It promised to be rough on the outside. We took our time getting underway, and didn’t raise anchor until 9:45am. Outside the entrance to Reid Harbor, the waters were indeed rough, with current ebbing strongly, and the southwest breeze working up confused seas. I headed across to the lee of Speiden Island, which promised to be sheltered from the wind. We were not,

however, protected from the strong ebb current, which cut our speed at 3000 rpm down to 2 knots or less all along the island’s north shore. Part way down the island, Sandy spotted a dozen or more Mouflan sheep, right at the tideline, hopping on the rocks and grazing on the seaweed. This makes the second time we’ve seen exotic Speiden Island animals on this trip.

We were again exposed to the wind once we cleared the island, however the seas were noticeably smoother as we crossed into San Juan Channel. The current was in our favor for a time, also, and our speed picked up to more than 7 knots for a while. We motored along, heading for the entrance to Fisherman’s Bay. Since the entrance is tight, and we were arriving near low tide, we took the cockpit surround down to improve visibility. We immediately discovered just how much protection it had been giving us from the wind. The bay was ruffled with small wind chop, and the flags were flying straight out. I picked out an anchoring spot just past the second of two marinas on the bay, and dropped our hook. The surround then went back up, so that the cockpit afford a pleasant place to sit. We had our lunch, and then I dinghied ashore, seeking an internet connection so I could open the e’mail from our new friends Lori and Duane. I got a connection at the restaurant at the head of the dock and gave them a call. They will pick us up for dinner at 5pm this evening. We are looking forward to seeing them again, and hearing whether they liked the used Macgregor they looked at this past weekend. 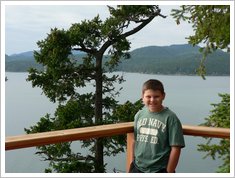 We had a delightful time with our new friends, Duane and Lori, at their home on Lopez. Lori picked us up at 5pm, and gave us a little tour of northern Lopez Island on the way to their place. Their Panabode cedar home is spectacularly sited on the brink of a steep cliff, just west of the Lopez ferry landing. Duane says that if you jump from their deck, the first bounce would be 80 feet below, and I believe him. He also says that he can toss a rock and hit the water, which must be at least 600 feet below. I believe that too. Of course, with such a dramatic clifftop location, the view of Lopez Sound and Upright Channel is incredible. Lori showed us around their fenced, raised bed garden, and Sandy and Cameron entertained their standard poodle, Dafney (or was it the other way around?). Duane served up a delightful meal, and our time with them slipped by in a blur, filled with stories about sailing and rock climbing. Almost before we realized it, we could see boats far below cruising by with their running lights glowing. It was getting late, and past time to head back to the boat. We said goodbyes, filled with appreciation for their generous hospitality and hopes for another get together in the not too distant future. Lori drove us back to Fisherman’s Bay, where we boarded the dinghy and putted back to the boat, with the night rapidly settling in. Back aboard, I grabbed my headlamp and flashlight, and I hauled the dinghy onto the foredeck for deflation and stowage. Tomorrow will hopefully be a high speed run back to Oak Harbor, followed by the drive back to Ken and Timi’s home.