Today was a rather low key, lay back sort of day, and considering the ups and downs of yesterday, that felt just fine. We made the short passage from Roche Harbor to the Reid Harbor anchorage on Stuart Island in around an hour. I anchored the boat inside all the floating docks and mooring balls, in around 8 feet of 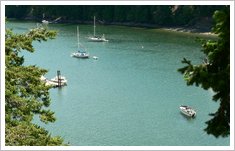 water. We had a snug spot, well clear of the other boats. We packed a lunch and went ashore at the State Park dock. We ate our lunch at a campsite table on the Prevost Harbor side of the island, and then set out on a hike over to the school house and treasure chest. Stuart Island is known for its one room school house, which is still in operation. This past school year saw only 2 students in attendance, but it was still operating. The Treasure Chest is something of an institution among cruisers. A local couple have produced printed tee shirts, vests, hats, sweatshirts and note cards, all featuring scenes and designs specific to Stuart Island. The unique thing about this souvenier shopping opportunity is that no payment immediately takes place. You select the item you wish to purchase, and you simply take it with you. Inside the plastic bag which holds the item is an addressed envelope, with the price of the item. When you get home, you mail the Treasure Chest operators a check. It’s all based on the honor system, and it’s apparently been working well for many years. It’s reassuring to know that such a system still has a place in our world today. 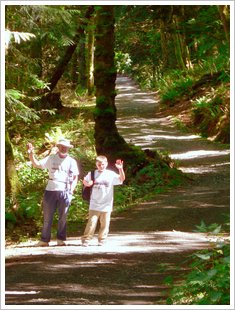 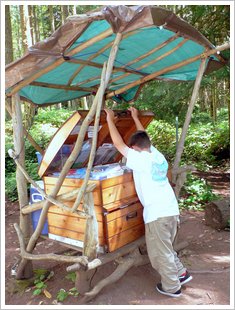 We reached the school house and treasure chest after walking up a long grade on the island’s gravel surfaced county road. I was wearing the shirt I’d bought, 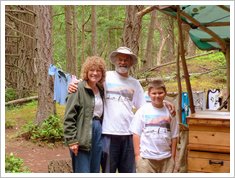 just in honor of our visit. I particularly like the design, which features a small group of orcas swimming past the Turn Point Lighthouse in front, and a map of Stuart Island in the back. We were delighted to see that this design is still available, and Cameron quickly came to the decision that he wanted one just like mine. There was one left in his size, so he grabbed it and immediately put it on. Sandy took a picture of us both in our matching shirts. This shirt has particular meaning for him, since he saw orcas yesterday less than a mile from the Turn Point Lighthouse. He can show his friends the location using the map on the back of the shirt.

Shortly after we got back to the boat it started to sprinkle, so I put up the surround. Sandy has been encouraging me during the whole trip to teach Cameron how to play cribbage, and this seemed the perfect time to try. I got the cards and 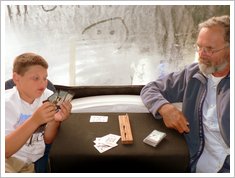 folding cribbage board out, and began briefing him on the basics of the game. We started out by playing a practise game, with all cards dealt upright, so he could see how to play the hands. He quickly caught on, and I was pleased to see that he enjoyed the game. I let him play his own hands during the second game, reviewing how he played each hand following the play.

For dinner Sandy fixed one of Cameron’s favorite dishes, macaroni and cheese with sausage. He quickly cleaned his plate. 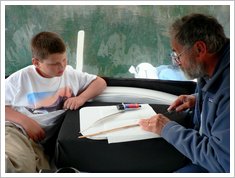 Afterwards, we tackled the project of making arrows for the bow he had whittled. I got my epoxy glue out, and Cameron fetched the plastic bag of crow feathers which he’d collected and saved during one of our hikes. We took a scissors and trimmed up several feathers for arrow fletching. I cut three grooves toward the back of each arrow, and epoxied the trimmed feathers to the shafts. The glue quickly set, and we soon had three arrows ready for testing. We’ll find a chance to see how they work in the next couple of days. The sun made a brief appearance at the head of our inlet, brightly illuminating the boats in the anchorage, before setting behind a low bank of clouds. Thus ended our day on Stuart Island.