I awoke at 2am to the sound of raindrops hitting the cabin roof. About that same time, I heard Cameron get up to use the head. Since he was up, I decided to have him pull out the cockpit surround panels, which are stored right along side his sleeping bag. I pulled my jeans on, got up, and zipped the panels in place. I crawled back in, secure in the knowledge that when morning finally came, we could climb out onto dry cockpit cushions.

In the morning, I picked up some complimentary muffins at the marina office. They made for a quick breakfast as we motored out of the marina. It had rained off and on during the early morning hours, and was still drizzling as we headed for Pender Island. We had an 7 or 8 knot breeze on the nose, and with the 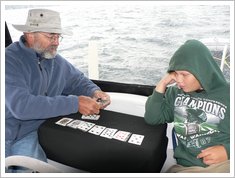 cockpit fully enclosed, on account of the rain, I didn’t bother trying to sail. While motoring, I taught Cameron how to play solitaire. About 3 miles out the rain quit, and the channel widened. It looked like I might be able to make Bedwell Harbour on two tacks if the breeze held, so I opened up the surround and set sails. Thee were a few whitecaps ahead, so I put a reef in the main. Almost immediately thereafter, the wind slackened, so I shook the reef out. The wind continued to fall, along with our speed and headway. I fired up the engine and motorsailed on our tack, then came about and set course for the south tip of Pender Island.

We arrived at Poets Cove Marina around noon. Because of our narrow beam, the dockmaster assigned us a slip on the 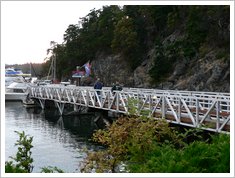 inside. The fairway to these slips runs right along the base of a cliff, and the entrance is extremely narrow (thus the question about our beam). I was uneasy about entering, but finally spotted a dock attendant at the end of the slip, so proceeded. We managed to tie up without difficulty. This place is very attractive, with nice amenities including pool, hot tub, spa, and nice restaurants. Sandy heated up left over smoked salmon alfredo for a hot lunch, and then we walked around to explore the resort. The pool looked inviting, so we grabbed our suits and went for a swim. The water was heated to around 85 degrees, and felt great on this overcast and rather cool day. I quickly gravitated toward the hot tub, and found some fellow boaters to chat with. 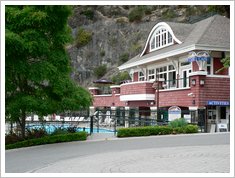 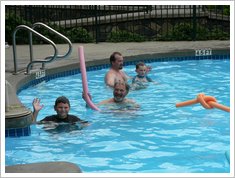 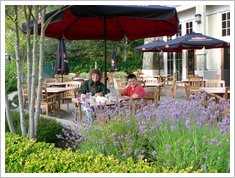 Following our swim we changed into dry clothes and headed up to the cafe for dinner. It was the perfect place to eat. 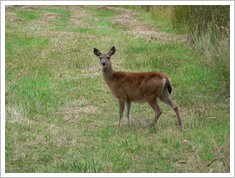 We ordered chicken wings for an appetizer, followed by gourmet burgers. After dinner we went for a walk to work our dinner off. I found a nice trail which led to a nice lake. We saw spotted a small group of deer out in a meadow. They seemed very tame and unconcerned with our presence. As we were walking back to the boat, Cameron asked if he could go swimming again. I saw no reason why not, although I assured him that I had no interest in going swimming again. He said that was fine. I told him it might not be much fun if no one else was there. He said that was ok too. I walked him up to the pool and he got into the water. He was the only one in the pool. Soon, too other kids about his age showed up. Before long, a wild series of water fights broke out. The kids figured out that they could create a regular fire hose flow by jamming one of those hollow noodles up against the hot tub jets. Wild periods of play alternated with conversation. They figured out their ages were nearly the same. They asked about the kind of boats each were on. The other two kids were quite impressed that Cameron lived in Hawaii, and that he’d flown all the way to Washington by himself. I’m sure Cameron will sleep soundly after all this activity today. 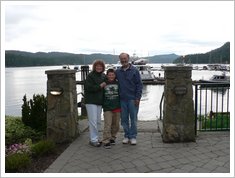 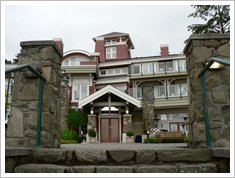 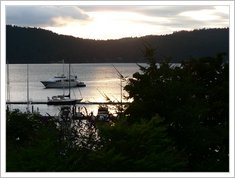