The signs were all there yesterday for a change in weather: drop in barometer, halo around the afternoon sun, stiffening afternoon breeze, and a thickening haze in the sky as the sun was setting. When I rose this morning, the change was here. Solid overcast, and a chill in the air. The breeze remained out of the 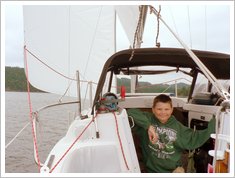 south, and held prospects for an interesting upwind sail. We took time to eat breakfast before getting underway, and still were able to release our tie and raise anchor by 7:30am. I motored out of Princess cove and headed out into the open waters of Houston Passage. I engaged autopilot and prepared the boat for sailing. Drop and lock the rudders, lower the centerboard, head into the wind, raise the mainsail, fall off, pay out the genoa, tighten both the main and jib sheets for sailing close hauled, and bring her on course, as close to the wind as she would allow. I estimated wind speed at a little over 10 knots, and the seas were beginning to whitecap, so I set a single reef in the main. She sailed nicely, making good progress on the tack with less than 20 degrees of heel. We were able to maintain speed close to 4 knots, and we gained enough on the first tack to clear the south end of Wallace Island on the next tack. This gave us the entire width of Trincomali Channel to work with, and we continued making good headway toward our destination of Montague Harbour, about 6 miles to the south. Our third tack allowed us to clear a buoyed reef out in the middle of the channel, and it became obvious that, as we neared time for our fourth tack, we stood a good chance of being able to hold that tack all the way into the north side of Montague Harbour, which is where I wanted to anchor. Before coming about, I shook out the reef, since the wind had shown no signs of strengthening, and had actually abated a little. We’d made enough headway to sail toward our anchorage’s entrance on a close reach. The better angle, coupled with a full main and genoa, allowed us to hit speeds of 4.5 to 5 knots on this tack. We glided through the gap between Wise Island and Sphinx Island, which guard the entrance to the north anchorage. It looked like we would be able to sail all the way to our anchoring spot.

The anchorage held about 6 two masted schooners, and the largest was under full sail and working her way out of the anchorage. She was a lovely sight, and 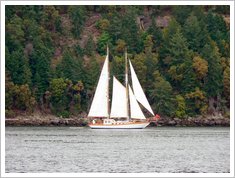 we got great views of her from various angles as we sailed in. I held course for a nice patch of water, fairly close to shore and well apart from other anchored boats. Our speed fell off as we neared shore. Just before reaching a depth of 20 feet I furled the genoa and went forward to lower the anchor. Sandy turned the boat slightly, to luff the main and I lowered away. The only work our engine did this day, other than getting us out of the Princess Cove moorage, was to set our anchor at Montague Harbour. This was one of the best, and most productive, upwind sails I’ve ever experienced. 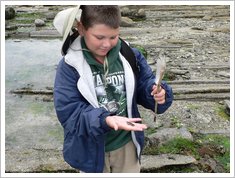 While I put the sail covers on, Sandy and Cameron prepared lunch. After lunch, I got the dinghy ready for going ashore. I also installed the cockpit surround, since it looked like it might rain. What appeared to be rain ended up being just a lowering fog. We went ashore and split up. Sandy went on a hike on the trail which follows the shoreline, around Gray Penninsula. Meanwhile, Cameron and I went on a beachcombing walk. The tide was out, so we explored tidepools, watched clams squirt, and examined shells, feathers, seaweed, and other fascinating things which abound here. I persuaded Cameron to hold a little crab. He survived the experience, but when he reached into a pool to pick up another, he got a little pinch for his trouble. Oysters were plentiful, and I wished I could get confirmation that shellfish were safe to consume here. Lacking official word, I was forced to pass up a vertible feast of clams and oysters. 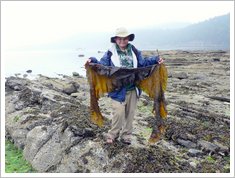 We met up with Sandy back at the dinghy, and went on a dinghy tour of Montague Harbour. The main harbour is filled with mooring buoys, since this is a BC Marine Park. About half of the buoys were in use. We are happy to be anchored on the north side, however, since it’s much less crowded here. After returning to the boat, we took it easy. Cameron sat up on the bow, whittling on a piece of driftwood. I napped and Sandy read. This has been a very relaxing day.

After a tasty dinner of alfredo noodles and smoked salmon, we dinghied in to shore for a stroll down the Grey Penninsula loop trail. The sun was settling toward the western horizon, and in the lower angle light, everything seemed to glow. Cameron was determined to craft a bow and arrow, so he was on the hunt for sticks which could by made into arrows. I selected a stick which might serve as a bow. Thus armed, we proceeded through the woods. We found a bunch of black feathers, which we collected. They might do for fletching arrows. Our hike eventually brought us back to the beach, and we decided to sit on a log to whittle. I lent Cameron my folding pocket knife, and gave him some safety and technique tips. We noticed other people, up and down the beach, sitting back and watching the sunset develop. It proved to be worth waiting for. We lingered on the beach until the sun dipped behind a distant mountain. It was time to return to the boat for hot chocolate and herbal tea. 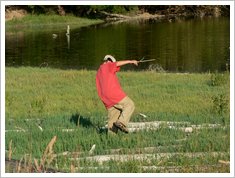 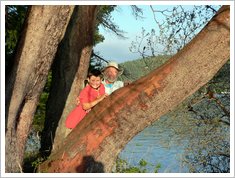 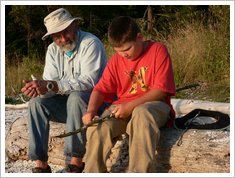 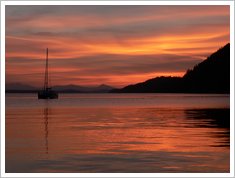