We got up around 7am this morning, had coffee, and then got underway around 8am. It was a calm morning, so I opted to run down the outside of Valdes Island. I wanted to reach Porlier Pass before the current started running too strongly. We ate breakfast while underway. Cameron seemed unusually drowsy, and so we suggested that he go below and take a nap. He followed that suggestion and was soon sound asleep. 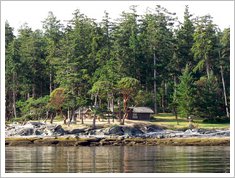 Early in the run a breeze came up, so I raised sails. The wind was light, and out of the southeast, and both conditions were unfavorable. Nonetheless, I was able to motor sailed down to Porlier Pass. As we entered the narrows, the current had already begun to run, but it was not too strong, and we made the passage without difficulty. We then picked our way through scenic narrow islands. 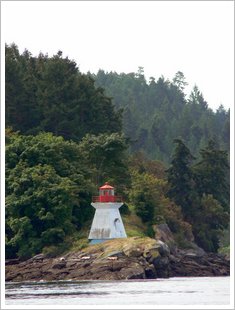 steep, knife-like spine of rocky islands separating the inlet from the open waters of Houston Passage. We found 8 or 10 boats moored in the cove, using the characteristic method of stern ties. Chains and rings have been installed at regular intervals along the rocky shore. They’re marked by red arrows painted on the rock. Several were still available, so I selected one and maneuvered the boat for moorage. When I lowered the anchor I was surprised at how deep it was, and in the back of my mind I wondered about the lack of scope. However, it was a dead calm day, and the stern tie would help hold us, so I decided it was good enough. While Sandy and Cameron worked on preparing lunch, a parade of boats began arriving. Within a 20 minute period, at least 8 boats pulled in. Some stern tied, some anchored conventionally near the mouth of the cove, and some rafted up with friends. 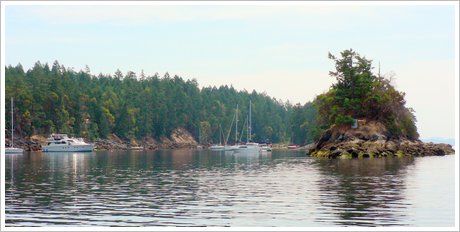 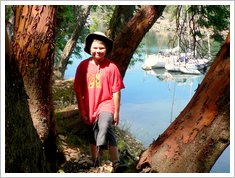 After lunch Sandy and Cameron dinghied ashore to go for a hike. I stayed on board to catch up on posting pictures to my 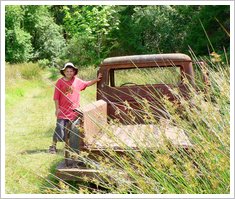 journal. They hiked over to Conover Cove, near the south end of the island, encountering such interesting features as a derelect Willys Jeep pickup, a handpump well, and a small building which has bewen completely covered with signs, made by cruisers, posting their boat names and dates of visit. There were hundreds of these signs, some quite artistic and elaborate. We’d seen these “signing places” in the Bahamas and on the Sea of Cortez, so it was fun for them to find this one here. 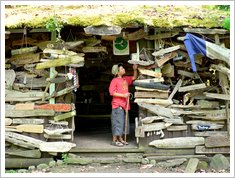 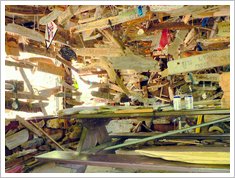 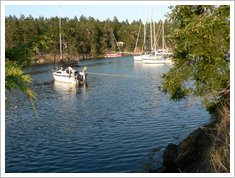 I had just finished my picture entries as they started back for the boat in the dinghy, with Cameron at the oars. I climbed out of the cabin, and immediately noticed that things weren’t right. The boat was lying much closer to the rock face than I remembered. I then glanced toward the mouth of the cove, and saw that the boat was not more than 10 yards away from the powerboat moored on our port side. It struck me that, while I was down in the cabin working on the computer, a side wind had piped up, causing the anchor to drag. It had reset, but our moorage would definitely have to be redone. I motioned Sandy and Cameron to get back on board to help me with the maneuver. I quickly tied the dinghy up and had Sandy start the engine. I went forward to begin hauling in the anchor. Sandy released the stern tie line and pulled it aboard while I started raising the anchor. I asked Sandy to run us forward, so we wouldn’t drift back toward the powerboat now astern of us. About this time I heard a series of chirping sounds, and the motor was not running. Sandy said I’d better come back, since the motor wouldn’t start. Things were starting to get dicey, since we were starting to drift back toward the powerboat. I immediately let the anchor loose and the faithful Bruce grabbed right away. I cleated off the rode on a short scope and went back to see about the motor. When I keyed the starter it briefly tried to crank and then chirped. I immediately suspected a fouled prop, and when I tilted up the motor that’s exactly what I found. The dinghy tow line, which I had hurriedly tied off, had fouled the prop when we started drifting back. I was able to climb into the dinghy and unwrap the line, and the engine started right up. We then redid the mooring, this time setting the anchor with substantially more scope and at a different angle, and with a strong reverse pull from the engine.

For dinner Sandy prepared a pizza, which we baked on our backpack oven. We’ve fixed these several times before, and with good results. However, on this occasion the results were less than satisfactory. The temperature indicator doesn’t seem to be working properly, and so the crust ended up somewhat blackened. We ate it anyway, discarding the most heavily toasted portions of crust. 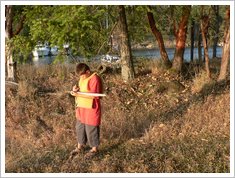 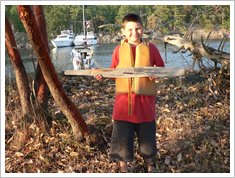 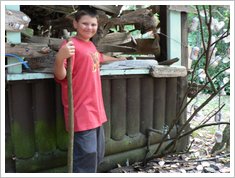 After dinner Cameron and I rowed ashore to fix up a boat name sign of our own. He guided me up the trail to the signing house, where he picked out a special place to leave our sign. He told me that he hopes that, one day, he can return here with his own kids and find the sign which we had left. As we hiked back to the boat we could see that a spectacular sunset was shaping up. We hurried our pace so that we could see it from the dinghy. We finished off our evening with carmel corn and a laptop slide show of our 2005 cruise to Alaska. 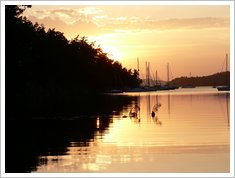 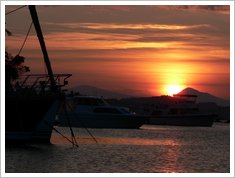 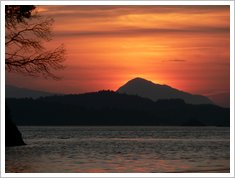