We had a short distance to go today, and so slept in until around 7:30am. I heated water for coffee and Sandy and I enjoyed the tranquility of Pirates Cove while sipping our coffee. The tide was quite low, and I decided that we would get underway before breakfast, since we would have to pass through Gabriola Narrows, and it would be good to transit at or near slack. As we neared the narrows, we encountered numerous boats going in both directions, a good indicator that we’d arrived at slack, which was indeed the case. Our speed hardly changed as we motored through the scenic passage and into the island studded waters beyond. We were on the edge of the open waters of Georgia Strait, which were nearly calm on this sunny, settled day. The approach to Silva 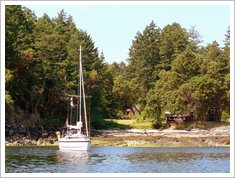 Bay was only a few miles past the narrows, and soon we entered the bay itself. The bay was crowded with boats, some in the marina and some at anchor or tethered to mooring balls. I noticed a small side channel on the north side, just shy of the main bay. It looked like an anchoring possibility, so I idled in to check depth and bottom condition. It was at or near low tide, and we were in 10 feet of water. I liked what I saw, and dropped the hook. We basked in bright sunshine and enjoyed our slightly delayed breakfast.

Cameron and I then hopped into the dinghy for an explore. We putted over to a small island across the channel from our anchored boat. The island itself is privately owned, but I’d been told that the tidelands are open to public access. I tied the dinghy up and we hopped out. We hadn’t wandered far before a long bearded fellow strode out of the woods and said hello. He turned out to be the owner of the island. We had a pleasant conversation, and he confirmed that we could walk 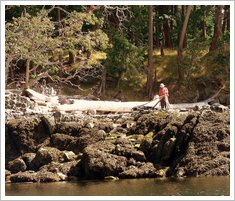 around below the high tide line. He told us about another smaller island he owns, just north of this island, which he said we were free to wander on. Cameron and I leapfrogged around the island. Cameron walked along, while I followed in the dinghy. We found lots of interesting tidepools, filled with starfish and other interesting creatures. Cameron, of course, built another driftwood fort. As lunchtime approached, Cameron ran the dinghy back to the boat. While I worked on my journal, Cameron stepped up and fixed lunch, with great artistic flair. 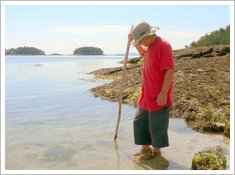 After lunch, we all piled into the dinghy to continue our exploration of this area. We ran out toward the small island we’d been told about by its owner. It featured more of the strange rock formations which seem to be characteristic of these islands. Cameron immediately went to work on his latest driftwood fort project, while Sandy wandered around the island. I watched Cameron’s labors for a while, and then pitched in to help. Together, we constructed a substantial shelter, however, with the placement of the last piece of driftwood, the whole thing partially collapsed like a house of cards. 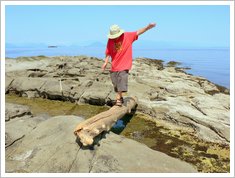 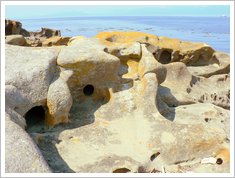 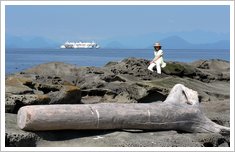 I dropped Sandy and Cameron off at the boat, to begin dinner preparations while I dinghied over to the marina to buy a bag of ice. By the time I got back, dinner was nearly ready. Sandy had whipped up crab alfredo, with the left over crab meat from our feast a couple days ago. It was an excellent meal. After dinner, Cameron and I went out for a little fishing, just outside the kelp bed beyond our little island. We fished diligently but without luck. 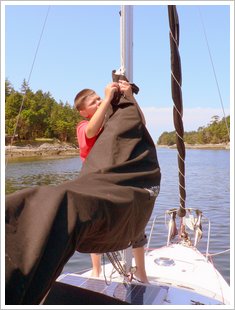 A few comments are in order regarding Cameron’s progression as a cruising mate. At first tentative, he’s picked up 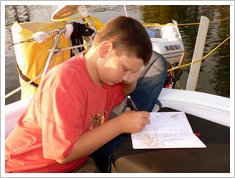 numerous skills, and now knows all the key parts of the boat. He’s become a steady hand on the tiller of the dinghy kicker, and has learned how to steer the Mac. He’s quick to volunteer to help with meal prep and other chores. He’s been diligent in keeping up on daily entries to his journal. Last evening I was struggling with a cough, and he took it upon himself to square the deck away before bedtime. We couldn’t hope for a better cruising companion. We’re very proud of the boy he is, and the young man he’s becoming. Cameron’s parents can be rightfully pleased and proud of the parenting job they’re doing.