I awoke in the wee predawn hours to the sound of our Canadian courtesy flag slapping against the starboard shroud. The jib sailcover was vibrating. A wind had come up during the night. When the alarm rang at 5am, I wondered if it would be too windy for fishing. I got up anyway and started the stove, to heat coffee water. I woke Cameron, and we breakfasted on the apple fritters we had picked up at the Chemainus bakery yesterday. I kept glancing back toward Dave’s boat, and finally saw him moving about inside his cabin. When he stepped onto the dock I walked over to see if he thought it would be too windy outside the harbor. He said “Nope. The fish bite better when it’s cloudy and a little breezy.” That was good enough for us. We gathered up our gear and boarded his 9 foot inflatable dinghy. It was a tight squeeze, but we managed. He started his 4hp outboard after a few pulls and we motored out of the harbor. The breeze was around 10 knots out of the north, setting up a tight chop in the channel. I was skeptical that we’d be able to fish in that wind, since inflatables get blown around quite easily. Sure enough, it was difficult to get our jigs down to the bottom. We’d run up, shut the motor down and then drift, jigging all the way. The fish weren’t biting, so we crossed the channel to a small island. It was rough on the way across, and Cameron and I got quite wet as we bounced into the building chop. We struggled to fish along the shore of the island, but the wind showed no sign of easing, and we had no luck. Finally, Dave decided to move to another spot, out in the open near the mouth of the harbor.

While fishing, Dave engaged Cameron in a bit of conversation. Says Dave “Hey Cameron, what grade are you in at school?” Cameron replies “I’m going into 6th grade.” Dave comments, ” 6th grade, huh. I bet you’re really starting to get after those girls.” Cameron comments “Nah. I figure I’ll hold off on that stuff until 9th or 10th grade.” Dave: “Wow, you’ve got it all planned out. Watch out, though. You never know when one of those girls will cast an eye on you.” No comment from Cameron. 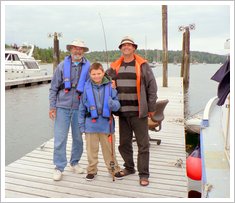 The wind began to lessen, and we started getting Cameron hooked a couple of rock fish, and managed to bring one up to the boat. He was very disappointed to learn that we had to let it go, since rockfish in this area cannot be kept. But release it we did. Dave was very pleased that we hadn’t been skunked, and that Cameron had succeeded in catching a fish.

Back at the dock we prepared to get underway. I moved the boat over to the fuel dock, to fill the tank we’d been running on since leaving Victoria. We took on less than 10 gallons, which translated into fuel consumption of more than 6 miles per gallon. I also filled the water tank. We said goodbye to our good friend Dave. Before shoving off, he gave Cameron a gift of two plastic bait fish and a fancy jigging lure. He is a very sensitive, considerate fellow, and we were glad to get to know him a bit.

We had a good sailing breeze, around 10 knots, however it was out of the north, and north we needed to go. The channel we were in was quite wide, so I

decided to try some upwind sailing. The MacGregor can’t point very close to the wind, but we made the best angle possible, and crossed in the direction of Ladysmith, averaging between 3.5 and 4 knots. As we neared shore, however, the wind began to fail, so we tacked. Our headway on the second tack was very disappointing, so I dropped sails and motored up, in the direction of Pirates Cove. Following a short 5 mile run, we rounded the point and carefully entered the narrow channel into the cove. Lots of boats were moored in the private marina, but about half of the stern tie rings along both shores were open. We selected a nice looking spot near a dinghy dock. I dropped anchor out a ways from the ring and had Sandy back down on the anchor. Then, while she kept pressure on the anchor with the motor in idle reverse, I rowed ashore with the free end of our stern tie line. I slipped it through the ring and brought the line back to the boat. It was then a simple matter to pull the slack out of the line and cleat it off. We were snugly moored in Pirates Cove. 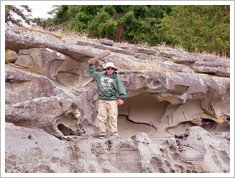 I clamped the kicker motor onto the dinghy and we piled in for an explore. The eastern shoreline of the cove consists of sandstone rock, with lots of ledges and strangely shaped hollows and alcoves. I dropped Cameron off at the dinghy dock so he could try climbing his way along the sandstone ledges. He was remarkably adept, and got past several tight looking spots. We followed in the dinghy, snapping pictures as he went. 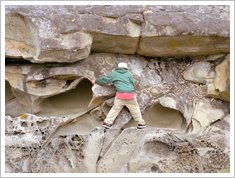 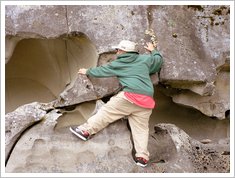 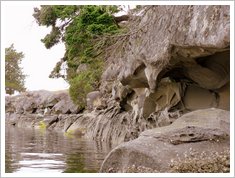 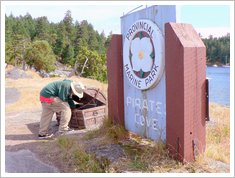 When he could go no further, he reboarded the dinghy and we went up to the head of the cove. 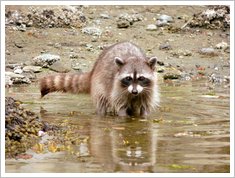 We encountered a young racoon, who was feeding along the water’s edge. After tying up the dinghy, we walked across a narrow neck of land to a driftwood covered beach. We also hiked a trail near our moorage, discovering a pirate’s chest placed there by the parks department. Cruisers had placed various trinkets in the chest, there for the taking by little kids. We followed a trail through the woods to the south end of the island, and took a break there while Cameron built another driftwood fort, complete with access bridge. Sandy and I were both sure he would fall in, but he managed his balance nicely, and was able to walk back to the boat in dry clothes. For dinner, we barbqued the ling cod fillets which Dave had given us. They made for an outstanding dinner. 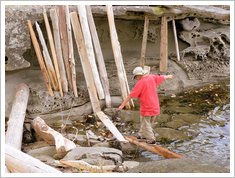 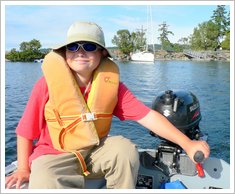 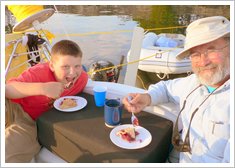 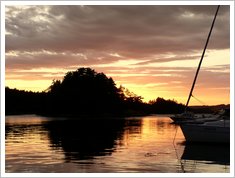