I was awakened in the middle of the night to the sound of raindrops, beginning to pelt the cabin roof. Shortly thereafter, the sounds of distant thunder disrupted my sleep. I thought of the open cockpit, with seat cushions exposed to the rain, but it didn’t bother me enough to get up in the middle of the night to install the cockpit surround. It would wait until morning, and the wet seats would easily dry off with my chamois. 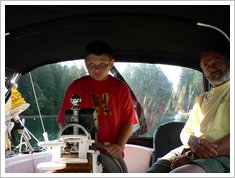 I got up at 6:30am, and it was still lightly raining. I had Cameron hand me the surround panels, and I zipped and snapped them into place. The surround provides us with a completely enclosed cockpit, and it’s very cosy during a rain. Once the cushions were dried off, we were ready for whatever was to come. Once I’d had my coffee, I prepared to get underway. I tasked Cameron with reeling in the stern tie line. 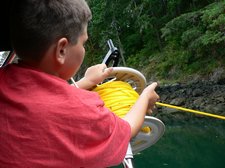 Once that was done, I released the bow line from the mooring buoy, and let Cameron take us out of the Cove. He gets very serious when he’s driving the boat, clearly feeling the responsibility of safely steering the boat. Once we got out into open waters, I took over. By then the rain had ceased, and the sun came out. We had a bit of a sailing breeze, to I raised both the main and the genoa, and we motor sailed our way out of Saanich Inlet. Once we entered Satellite Channel, between Saltspring Island and the main Vancouver Island, the wind clocked to astern, so I was able to sail wing on wing, with whisker pole on the jib and preventer rigged to the boom. Our speed held at between 3 and 4 knots, so I shut the engine off and we enjoyed a quiet downwind sail. Our wind held until shortly after noon, enabling us to sail through Sansum Narrows. While eating a lunch of crackers, smoked salmon and beer, the wind finally died. After lunch I fired up the engine and we motored the final 8 miles to Thetis Island, where I figured on taking a slip. We actually went farther today than initially planned. However, the day 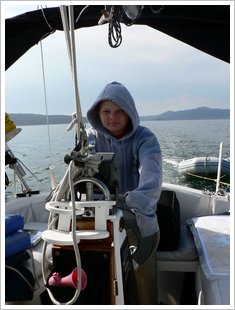 was nice, the distances moderate, and getting a day ahead of schedule will allow us to explore an additional spot or lay over at some special place. As I neared Thetis Island Marina I started hearing radio calls from boats in search of a place to tie up for the night. I radioed from a couple miles out, and was directed to C Dock, bow in, portside tie. Sounded good to me. We found C Dock without difficulty, and the dockmaster was standing at the end of the dock, ready to take our lines. It’s warm and sunny here, and feels like a good place to stay. They have water, fuel, ice, showers, wifi, a pub and small store, and a liquor store. What more could you ask for? Sandy and Cameron went for a walk up the road, while I typed on my journal, and they came back with a jar of jam, a bag full of fresh salad greens, and a fresh bumbleberry pie, which looks great. A little further into my typing, a First Nations guy who had just pulled in on a small boat walked up and asked me if I wanted to buy some crab. Oh yeah! I got three nice Dungeness for $20, and he cleaned them to boot. Our dinner menu of hamburgers will just need to be revised. 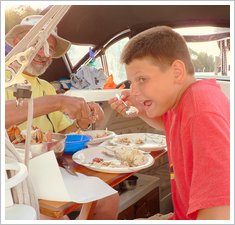 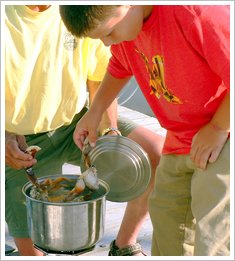 Dinner’s done, and a memorable feast it was. While boiling a kettle of salt water on the camping propane stove which I set up on the dock, I struck up a conversation with a fellow who lives on an older working boat, tied up across the dock from us. He was busy painting trim, and told me that he had recently purchased his boat, and had lots of work to do on her. He offered to give me some oysters from local waters. Both he and the dockmaster, who collected them, had been eating them to no ill effect. I accepted his generous offer, and fired up the barbque to grill them. They were larger than I prefer, but I do love oysters. When their shells opened I offered Cameron a taste. He was game, and so I sliced off a chunk and placed it on a spoon. I advised just tossing it in, rather than trying to nibble on it. Trusting kid that he is, he followed instructions. However, his expression immediately turned to a severe frown, and he appeared to be bordering on gagging. I could see in his eyes that he was requesting permission to eject the oyster chunk. I pointed toward the water and, with great relief, he returned the piece of oyster to the sea from which it had originated. He kept repeating “Oysters are nasty!” After this experience, I wasn’t too sure how fresh crab would go over, but I needn’t have worried. He was adept at cracking crab, and equally adept at eating it. We ate all the crab we could, and then gathered up a generous zip lock bag full, which we tossed into the refrigerator. It will be a great addition to a future dinner. The meal was topped off with large slices of pie all around. Sumptuous fare indeed.