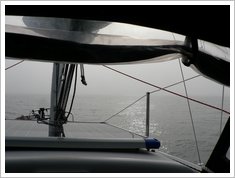 It was calm in the Inner Harbour all night, and the sky was clear when I rose at 6:00am today. It looked like a great day 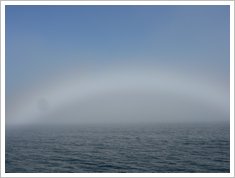 for us to depart Victoria and start working our way north. We were underway by 6:30am, with intent of reaching the narrow channels around Trial Island at slack. As I made the turn into the Strait of Juan de Fuca I could see a heavy fog bank further out. It was clear and sunny near the shoreline, where we were running. However, about half way to Trial Island the fog began closing in on us. Soon, visibility dropped to a few hundred yards, and the sun was reduced to a dimly lit disk overhead. My confidence was enhanced by the fact that I was able to follow the GPS track which we made on the way in to Victoria. Since we didn’t hit any rocks on the way in, I figured we were in good shape cruising through fog on the way out, so long as I followed the track. I wasn’t worried much about other boat traffic, since no large vessels would be in these narrow, rocky channels. To be safe, I dug out my radar reflector and hoisted it up on my flag halyard. About half an hour after we entered Haro Strait the fog began to lift, and we were soon back in sunshine. As we were emerging from the fog, we were treated to a “fog-bow”, a kind of white rainbow created by sunlight reflecting off the fog. We’d seen them before, but they’re always interesting to see. 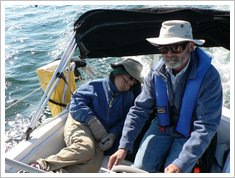 The run up to Sidney Spit was uneventful, and around 11 am we dropped anchor about a hundred yards off the beach. I 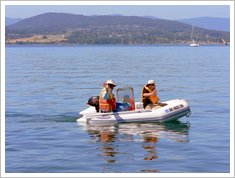 dug out the crab trap, eager to use some of the salmon bait we’d bought at the Victoria Thrify Grocery. Cameron and I dinghied out to a promising spot, where I set up the trap, baited it, and lowered it in the water. I was telling him a story about when Grandma had lowered a crab trap once into water deeper than the length of line I had. She didn’t know that the float wouldn’t hold the trap up, and we both watched it sink into the depths. As I finished the story, I tossed the extra line into the water and dropped the float in. It was then that Cameron innocently asked if the float shouldn’t be tied to something. Oh no! Major senior moment. It had been so long since I’d used the crab trap, that I’d just figured the float to be tied to the line. Not so. Well, that ended our crabbing for the day. Cameron looked at me and said, “We won’t tell grandma, right?” I said that we would tell grandma, but we wouldn’t tell anyone else. However, here’s the embarassing story for all to see. We both agreed that we wouldn’t let the incident spoil our day. 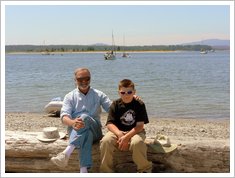 By the time we got back to the boat, Sandy had a picnic lunch fixed and we went ashore to explore Sidney Spit. We had lunch ashore, near the dinghy, and then went for a walk to the extreme end of the mile + long sand spit. We picked up shells, sea glass and interesting rocks. At the far end, Cameron and I built a cool driftwood fort, before starting the long walk back. 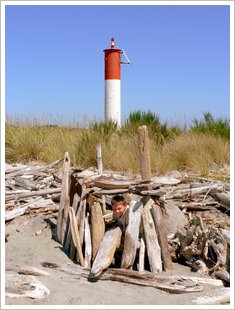 Along the way, we discussed possibly going farther today, which would shorten our run to Buchardt Gardens tomorrow. That would allow us to see the Gardens tomorrow, instead of laying over a full day here. That would give us back the extra day we’d spent in Victoria. It seemed to be a good plan, so I raised anchor and off we went. When we hit the channel near the Sidney ferry landing we picked up a sailing breeze, so I pulled the sail covers and raised sails. We weren’t far from our destination, so for the first time on the trip I cut the engine and we proceeded on wind power alone. It was definitely light air sailing, with maximum speed of 3.2 knots, but what the heck. We were sailing. I stayed with the sails for about an hour, but a few miles short of our planned anchorage the wind died, so we motored the rest of the way. We anchored in Mill Bay, which is a quiet, peaceful cove. A handful of boats are anchored or tied to mooring balls, and the nearby marina looks to be about half full. We barbqued chicken cordon bleu which we’d bought in Victoria, and it was great. As dusk was settling in, I rigged a fish pole for Cameron. He was working 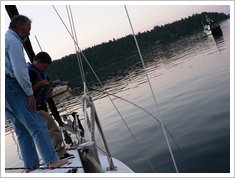 a plastic jig from the bow of the boat when, all of a sudden he said “Whoa, what’s that?” I looked to see his rod tip sharply bent, and the line zigging across the surface of the water. I coached him on how to play the fish, but it clearly didn’t want to come up. I showed him how to pump the rod and gain line. He finally got it to the surface, and we could see that he had hooked a 3 foot long dogfish shark. Another larger shark was following his hooked fish. After a short struggle at the surface, the fish managed to cut the line with his sharp teeth, and he settled into the dark water, taking Cameron’s jig with him. Cameron was thrilled with the whole event, however. I set him up again, and he managed to hook another fish, with similar results. With that, we decided to call it a night. Long day, but good memories.