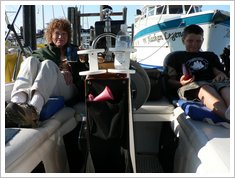 Having made the decision to stay in Victoria an extra day, due to the forecast of strong winds, we slept in this morning, not rising until around 8am. I caught up on my journal after breakfast, and then Cameron headed uptown while Sandy worked on pictures. Cam and I poked into a few shops, and then headed over to the Victoria Bug Zoo, which had been recommended to us by Bruce. It was a really cool zoo, with all kinds of live, exotic beetles, walking sticks, centipedes, spiders, scorpions, ants and other critters. Our tour guide told us about each creature, and she was able to handle many of them, including some tarantulas and scorpions, which are quite docile. She invited little kids to handle some of the bugs, but only adults could handle the larger ones, such as the tarantula and scorpion. 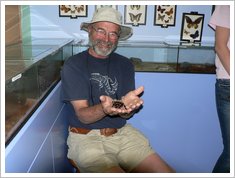 I held a tarantula, but Cameron said he’d had bad experiences with bugs, and declined the chance to handle any. The leaf eating ant colony was particularly amazing, consisting of a maze of clear plastic tubes and chambers which covered two whole walls of the zoo. The ants had a harvest chamber, packed with leaves, a long tube where workers could be seen hauling off chunks of leaves, processing rooms where fungus was cultivated, a queen’s chamber, a waste disposal room at the bottom of the colony, and an ant cemetery where dead ants were deposited. 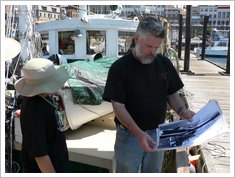 We returned to the boat and met up again with Bruce, who invited us aboard for a tour of his boat. It’s an amazing craft, and he gave us a detailed description of it’s colorful history. We saw the wood burning heater stove below deck, which heats piped water throughout the boat and beneath all the bunks, a very clever system for a boat designed to cruise the Arctic. He also showed us his sextant, a beautiful instrument. He gave Cameron a small telescope as a special gift. 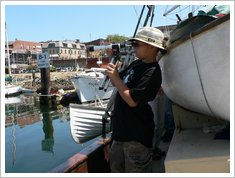 After lunch, we headed for Starbucks, where I worked on uploading posts and pictures. Sandy and Cameron walked over to China town while I worked on the computer. We ate our dinner of mac and cheese with left over hot dogs in the cockpit, in comfy sunshine and grateful that last evening’s strong winds had not returned. Our prospects for a good travel day tomorrow look good. We will depart for sure. After dark this evening, we plan on walking to the end of our dock to enjoy an unobstructed view of the Parliament Building, which is beautifully decorated with thousands of lights.