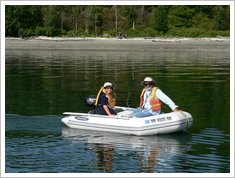 I raised anchor at 8:15 this morning, after enjoying a nice cup of coffee out in the cockpit. The bay was calm, with hardly a soul stirring on the other boats moored there. We motored out toward the south side of Waldron Island and almost immediately picked up a 2 knot current. I was able to maintain 6 knots at just over 2000 rpm. I ran out the jib to help us along. As we entered President’s Channel the current accelerated, and I was able to slow the engine down to around 1500 rpm. Speiden Island was our next landmark, and as we cruised along its southern shore, we saw several of the wild fallow deer and goats which still roam the grassy open hillsides. These animals are descendents of exotic game species which were released on the island years ago, when the island’s owner tried establishing a private hunting preserve. We had difficulty viewing these animals, however, since the current increased to around 6 knots, and the uneven bottom set up an extensive area of 2 to 3 foot standing waves, some of which were capping. These seas got very confused, and they kicked us around as we worked our way to the south side of the channel. Once on the south side, things calmed down and we eased our way past Roche Harbor, with its amazing collection of yachts and pleasure boats. 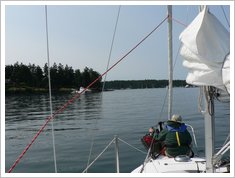 We navigated the twisting channel of Mosquito Passage and glided into Garrison Bay, where we anchored on the inside edge of the boats moored there. I’ve actually seen this place much more crowded, so it was nice to be here with fewer boats.

After lunch, I dinghied Sandy and Cameron in to shore, to start exploring the English Camp National Historical Park. I returned to the boat to try and fix the Wallas stove, which has been giving us trouble off and on ever since we left Oak Harbor. I determined the problem to be inadequate voltage reaching the stove, and I was able to replace the power connections, and wire them directly to the battery, instead of going through the buss bar. I tested the stove and it fired right up, so I’m hopeful that I’ve solved this problem. 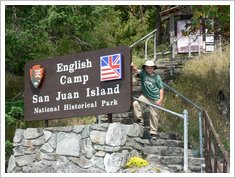 I caught up with Sandy and Cameron, and we continued our tour of English Camp. From 1859 to 1872 San Juan Island hosted two armed camps, with the English here and the Americans at the south end of the island. They call this confrontation the “Pig War” in honor of the only casualty, an English pig shot by an American settler who’d gotten tired of the pig raiding his garden. Both the English and the Americans claimed San Juan Island, and after a peaceful 13 year co-occupation, the Kaiser of Germany settled the dispute in favor of the Americans. The English clearly had the best of it during their occupation, since English Camp is a delightful place, while American Camp, on the south end of San Juan Island, is cold, bleak, and windswept. Our visit included a hike up to the English Camp cemetery, where 6 Royal Marines and one civilian are buried. During the hike up to the cemetery, Cameron discovered a delicate type of orchid, called coral root, which was growing near the trail.

After our tour of English Camp, Sandy returned to the boat to begin dinner preparations. Cameron and I went out for a tour of the bay in the dinghy, with Cameron running the outboard. He’s definitely gotten the feel of steering, and he gradually worked up to running the throttle wide open. He topped things off by bringing us in to the boat, making a successful landing on his second attempt.

The dinner of chicken fajitas was great, and we’re now enjoying the peaceful calm of evening on Garrison Bay. No loud partying, no generators, not even any dinghies running around. As I glance over to the restored blockhouse on the shore in front of English Camp, I can easily imagine a large supply ship tied up to the pier, off loading provisions for the fortunate garrison which was stationed here.

Tomorrow we’ll try for an early start, eating breakfast while underway. We plan on cruising down the west side of San Juan Island, where whales are often sighted. Our destination will be Victoria’s Inner Harbor, where we will clear customs and tie up at the Wharf Street Marina. Cameron is really looking forward to the prospect of showers and sight seeing in Victoria.