I rose early as usual, and had my morning coffee in the cockpit, waiting for the rest of the crew to stir. I was rewarded by the unusual sight of a bald eagle diving to the water’s surface, right next to shore. He had just missed diving after an otter. After the eagle landed on a nearby snag, the otter made a quick dive and disappeared from both my view and that of the eagle.

Since we only had 18 miles to cover today, we weren’t in that big of a hurry to start. We took time to fix up a french toast and sausage breakfast, and finally got going shortly before 9am. Our course took us past the north end of Cypress and then across to the east shore of Orcas Island. The current was running strong against us as we approached Lawrence Point. A bunch of boats were out, trolling for salmon, and this attracted the attention of a Fish and Wildlife Service Enforcement boat, which stopped each boat in turn to check for compliance with regulations. We cruised on by, rounded the point, and then set our course for Sucia Island, which was clearly visible at a distance of 7 miles. We bucked a current most of the way, and encountered some interesting rips and whirlpool currents. We arrived at Sucia just before noon. We took the time to cruise through some of the islands in Echo Bay, and then headed around to the west side of the island. I wanted to moor in Shallow Bay, where we’ve previously stayed. A dozen or more boats were there, either anchored or tied up to mooring buoys. There was still one open mooring buoy, but I liked the looks of an open patch of water, and chose to anchor there instead. 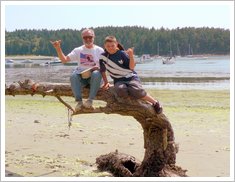 After securing the boat, we ate a quick lunch and then headed ashore to explore this lovely State Park owned island. When Sandy and I first visited here, we both remarked on what a great place it was to enjoy with kids. Our two boys were both grown up and married by then, and so we never had the chance to do this kind of thing with them. What a treat it is to be able to take our oldest grandchild out here, to explore the strange rock formations, peer into tide pools, and wander along the beach. The day was everything we hoped it would be. 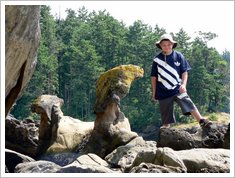 After our exploration hike, I ran the dinghy back to the boat and dropped Sandy off at the boat, to get dinner started. Cameron and I stayed in the inflatable to go on a little dinghy explore of Shallow Bay. I let him take the tiller, which was a really big deal for him. First time. He approached this task with caution, putting along at idle speed and finally getting the hang of steering by tiller, which at first seems opposite to what it should be. Once he mastered that, I showed him how to operate the twist throttle, and I let him open it up some. This was great fun for us both, and he was doing great until, for some unknown reason, the motor abruptly quit. 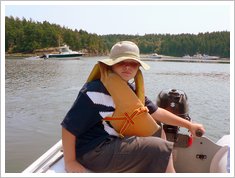 This is a brand new motor, and it has been performing perfectly, so I was surprised and concerned. We weren’t out of gas, and the kill switch clip was properly in position. I leaned on the cowling to look at the prop, and the motor felt hot. Sure enough, a piece of seaweed had wrapped around the cooling water intake and caused it to overheat. I feared that it had been damaged. I pulled the starting cord, which pumped water out the pee hole. I pulled for about 15 minutes, but couldn’t get the motor to start. I rowed the short distance back to the boat, and then pulled some more. She finally started, and sounded good, with a strong flow of water streaming out the pee hole. I’m assuming that the motor has a heat sensor which enables it to shut down before it becomes damaged. That seems to be the case anyway.