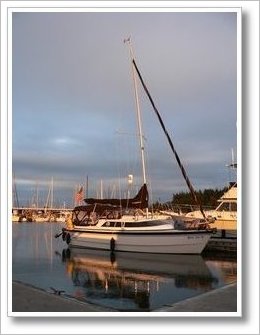 Our final day in port was filled with necessary last minute preparations, some nostalgic sight seeing, and some great 4th of July celebrations. We made a final grocery shopping trip to Safeway in the morning, to buy enough fresh fruit and meat to last us until we reach Victoria BC, our next planned provisioning stop. We were able to finish up and get back to the boat just before the Oak Harbor Police closed off the access road, on account of the Oak Harbor 4th of July parade, which started promptly at 11am. We were able to quickly put the perishables into the frig and ice chest, fix up a picnic lunch, and walk across the park to the start of the parade route. 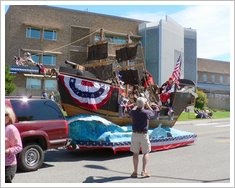 The parade was a great home town 4th of July event, and was kicked off with by an EA6B Prowler, who made a low elevation pass along the parade route. Entries primarily consisting of local elected officials and candidates for office, all tossing candy to kids along the parade route, hoping that such treats will inspire parents to vote for them. All the local firetrucks made an appearance, along with the local high school drill team, flag bearers for each of the 50 states, and even entries from local businesses.

After the parade, we ate our picnic lunch in the park, and then hopped into the truck for a drive around the Oak Harbor area. Our grandson Cameron, who is accompanying us on this cruise, was born in Oak Harbor and lived here until he was 4. We wanted to show him some places related to that time. Our first stop was at Smith Park, which graces a gentle slope a short distance from downtown. The park is shaded by stately Garry Oaks, a species of oak unique to this area. It was inthis park, 12 years ago, that Cameron’s parents got married. Next stop was the off base military housing complex where Cameron and his folks lived for 4 years. Next, we headed for Joseph Whidbey State Park, a mix of woods and meadow bordering the Puget Sound waterfront. 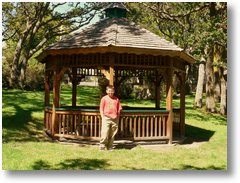 We hiked a trail down to the beach where Cameron’s parents took him when he was just a toddler.

As dinner time rolled around, we returned to the boat, and barbequed hotdogs at the dock. The evening was topped off, at 10:30pm, by the Oak Harbor fireworks show. Sitting out on F dock, at the edge of the breakwater, we were in perfect position to enjoy the show. What a great sendoff for our Gulf Islands cruise. 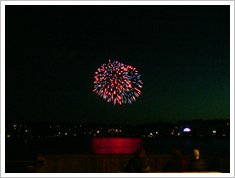 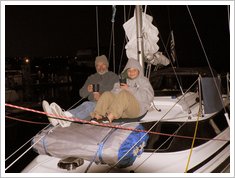 One thought on “Fourth of July in Oak Harbor”