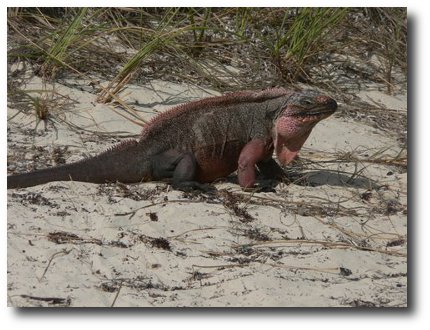 We rise to a mostly cloudy sky and a light easterly breeze. I get up a little too late to hear Chris Parker’s 6:30 am forecast for the Bahamas, but get the general idea with his later reports on weather for the Carribean, and his specific forecasts for boats at sea. While we’re eating breakfast, several boats in the anchorage get underway, and this trend continues throughout the morning, until only 3 of us remain.

After breakfast I walk ashore (it is half tide and we’re sitting in 2 feet of water) to burn trash. Sandy follows a bit later in the dinghy. While we’re on the beach the iguanas appear out of the bunch grass. They approach us without fear, obviously looking for handouts. I have saved a few chunks of apple core from the wastebasket, and I set them out for the iguanas. They clearly relish munching on apple core. They’re about 2 feet long, and the sign on the beach says they can weigh as much as 24 lbs. They’re mostly dark in color, but have coral colored patches on their heads and necks. They resemble prehistoric monsters as depicted in corny 1950’s dinosaur movies like Journey to the Center to the Earth. They are very easy to photograph, and we take lots of pictures. After our iguana experience, we take a short walk on SW Allens Cay, eventually working our way to the south end of the island on the eastern open water side. 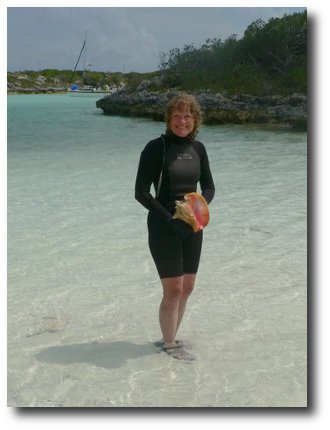 We return to the boat and grab our snorkel gear. It’s close to slack high tide, and we want to snorkel around the point, where the current was too strong yesterday. We find conditions excellent, and we venture out into deeper water on the ocean side. The light chop poses no problems, and we glide over several very nice coral heads, including one elkhorn coral formation which shelters a wonderful assortment of reef fish. Sandy spots a nice grouper, and I wish I’d brought my pole spear, but alas, it’s back on the boat. Next time I’ll wear my weight belt and take the spear.

After our snorkel we go on a dinghy cruise around the Allens Cay anchorage. We pass over beautifully colored waters of varying depth, and pause to chat with a pair of Bahamian fishermen. They tell us they’ve been conching, and we gaze over the gunnel of their work boat and see an impressive heap of live conch. They say they’ll haul their take back to Nassau for market. In response to my question as to how long they’ll be out here they say “Till the gas runs out”. They give us some tips on spearing grouper, and we wish each other well as we motor off.

Back at the boat, Sandy prepares lunch as I make ready to get underway. While so engaged, the couple from Amata Marie, whom we met in Nassau, motor up in their dinghy. We share stories about our Yellow Banks crossing. They came over a day after us and didn’t have quite as favorable a wind. They’re anchored out with the rest of our Nassau friends at Highbourne Cay.

I get underway shortly after noon. Sandy spreads lunch out in the cockpit while I motor out of the anchorage, turn the autopilot on, and raise the sails. We have a light easterly breeze, and I’m able to eat my lunch while “Ray” handles the steering. It is a short passage down to Highbourne Cay, and I’m able to follow a shallow water inside route. We sail by the Nassau group of boats, and wave at the couple from Glenice, who have dinghied to shore on the beach we’re passing. Another couple spot us sailing by and run over to us in their dinghy. We tell them we’re headed to the marina to buy ice, and will probably anchor in the shallow little bay just outside the marina. 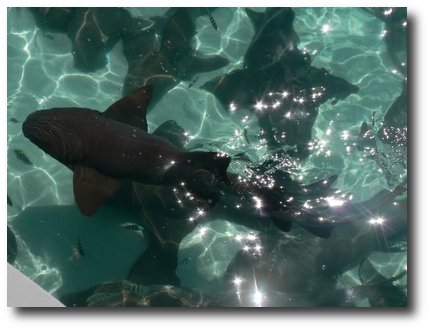 We continue sailing up to the approach channel to the marina. We’re able to make one tack and enter the channel. I lower the motor so I can drop sails before entering the marina. It has been another delightful sail on a reach. As we enter the marina, Sandy spots some large, dark fins sticking out of the water, just off the end of the marina dock. A guy is cleaning fish there, and as we slowly motor in, we pass close enough to see a dozen or more large sharks schooled up, obviously attracted by the scraps from a fish cleaning operation. They are mostly nurse sharks, with huge broad heads and up to 6 or 7 feet in length. We also see a lemon shark and several rays.

We tie up in the marina right behind an enormous catamaran sailboat, who is taking on fuel. I walk up to the office and inquire if its ok to moor there for an hour or so while we buy ice and pick up a few things in the store. The lady is very nice and says no problem. We buy ice, some hamburger patties, and ice cream bars which we enjoy in the shade of the office porch. Then it’s back to the boat and time to get anchored. I ease my way into the shallow bay just beyond the marina breakwater. It’s nearly low tide, and the water is very shallow, as thin as 2 feet or less. I tilt the motor until it’s just barely able to take in cooling water, and slide over a shallow bar and into a slightly deeper area, where I drop anchor in about 2 feet of water. I’m able to walk over to it and set it squarely and deeply into the sand. We then walk to shore in 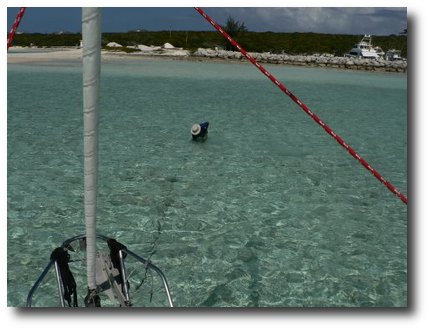 water that has warmed to 82 degrees. After we’ve finished our shore exploration, we barbeque up some pork chops and enjoy a delicious dinner at the cockpit table.

The only glitch to an otherwise outstanding day is the Wallas stove. It’s been performing perfectly ever since its little hiccup at Bimini, when it failed to start a couple of times. I had called the service man in Seattle at the time, who gave me some tips on getting it working again. I never had to try anything, since it started working reliably again after that phone call. Well, tonight it started fine, but after running a short while, it shut down and refused to start again. I’ll try it in the morning and if it won’t run, I’ll threaten to call the service man again. Maybe that will get it running again.