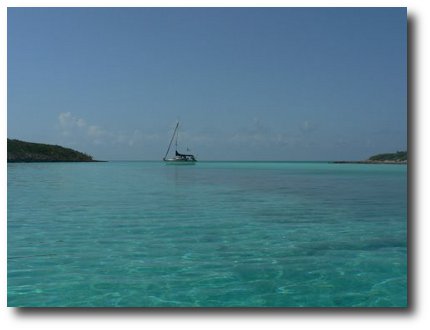 I get up at 6:40am and once again try to tune in Chris Parker on the single sideband radio, expecting nothing but static once again. However, today Chris is right there, and after a few tweaks of the fine tuner, he’s loud and clear. I take notes on his forecast for the Exumas, which sounds very good for the next several days. I’m glad to know I’m in range of his broadcasts, since he provides very detailed and reliable information for cruisers. I go up on the bow to deploy the inflatable. While standing there I find myself feeling like a little kid at the entrance to Disneyland, eager with anticipation at experiencing something unique and special.

After breakfast we climb into our snorkel gear and go on a little explore of the area. We suspend the dinghy between coral rocks with the mooring line, and then climb into our snorkel gear. We slowly swim the edge of the rocky shore of Roberts Cay, pausing over small coral heads and undercuts along the edge to view the fish and look for shells. The current is strong in our face to start, but we soon reach more slack water, and find ourselves just wanting to keep going. We reach the upper end of Roberts Cay and begin feeling an outgoing current, so we turn around and head back for the dinghy. About a third of the way back, while snorkeling in about 4 feet of water, I glance up and see a large dark shape slowly approaching. It’s a shark, about 6 or 7 feet long, with remoras swimming along just beneath it. I quickly look around for Sandy, and see her about 5 feet to my left and a bit ahead of me. She’s looking the other way and slowly kicking her way right at the shark. Before I can reach her she sees the shark and abruptly changes course for the shore. She doesn’t stop until she’s sitting on a rock shelf right on water’s edge, with very wide eyes. She says she saw it, and at first didn’t recognize it to be a shark. She wanted to point out to me this large fish, but then it registered that this large fish also had very large teeth. The shark wasn’t interested in us and just slowly swam on by. 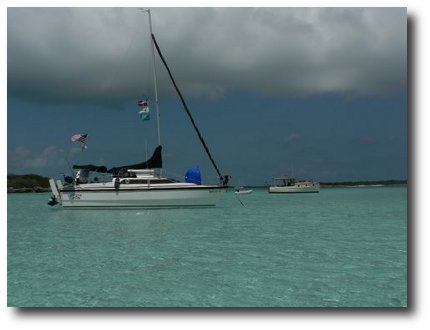 After our snorkel we decide to pull anchor and sail on down to Allen’s Cay. We’d heard on the radio that several boats were making the crossing to Allens today, and we want to get there ahead of the fleet. It’s a beautiful sail down to Allens. I can’t imagine a more delightful experience than gliding along at 4 knots in light air, over turquoise water on the sheltered side of these elongated cays. The main anchorage at Allens is quite crowded, but we head for a nice shallow cove to the south of the main group of boats. Only 1 other boat is anchored there, and there is plenty of room for us inside of him. This boat, Traveler, turns out to be a homemade power boat, with a design dating back to the 1920’s. We visit with the owners, a nice couple from Arkansas, and they invite us to join them for drinks later in the afternoon.

We go out in the dinghy for an afternoon snorkel, and find a couple of very nice coral heads, which are rich with colorful fish. We also find an area which is covered with immature conchs, caller “rollers”. It’s nice to see the next generation coming along.

Our afternoon visit with Don and Gayle is most enjoyable. They’ve sailed all their lives, and have seen the world. They now cruise on their powerboat, which is trailerable. They live in the Ozarks, but like us, are able to cruise on both coasts by trailering their boat.

We didn’t go ashore on the beach at the head of our cove today, because lots of shore parties headed that way all afternoon. We could see the land iguanas which live there, however. Every time a dinghy would near the beach, several would walk out from the brush, obviously looking for handouts. They’re quite sizeable lizards, 2 or 3 feet in length it appears. We’ll go ashore in the morning for a closer look.