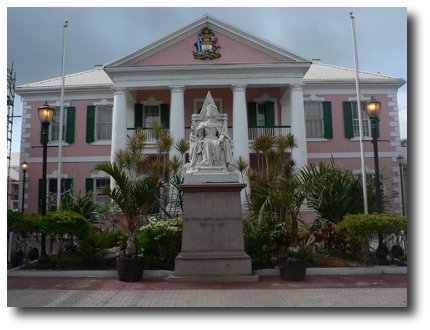 We decide over breakfast on an excursion to downtown Nassau this morning. We walk up to Shirley Street and catch a bus, which takes us right into the heart of downtown, a ride of around 3 miles. We get off and wander the streets, poking into a few shops and just enjoying the scene. We walk by a full block of burned out buildings, on the harbor side of downtown Bay Street. We buy postcards and small items in a shop across the street. The owner tells us about the fire, which occurred on Valentines Day, this year. It started in the office of a nearby shop, and got reported to the fire department when still very small. The fire department responded with a pumper truck, but when it arrived, its water tank turned out to be empty. A second engine was dispatched, and the pump wouldn’t work on it. They could have pumped out of the harbor with the first truck, but no one thought of that. Meanwhile, a gusty wind kicked up, and before anything more could be done, the whole block was ablaze. It was a very traumatic event, made even worse by the fact that this area was recently hit by a hurricane, and many of these same shops had been badly damaged, and had lost their insurance. 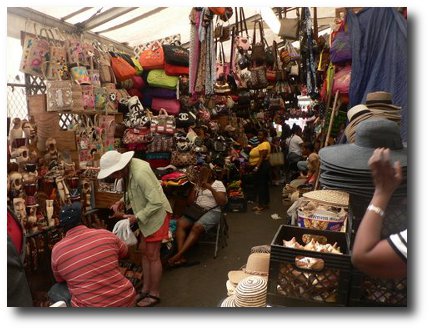 The major government buildings are in this part of Nassau, and we check out the historic Parliament Building and Government House, which is the Governor’s mansion. We also browse the straw market, which is set up beneath a big tent structure, and is literally crammed with small individual stalls. Straw baskets, T-shirts, carved wooden figures, beach towels, shells and more are offered there, none with price tags. Haggling is the order of the day, and we play the game with a few items, but not trying to push the price down all that much. As noon nears, we decide to return to the boat and fix lunch there. We climb on an eastbound bus down on Bay Street, and settle in for the ride. Things go fine as we approach the first bridge to Paradise Island, and the bus continues straight ahead. However, as we reach the second bridge, the driver hangs an unexpected right turn and heads uptown. Before we know it, we’re traveling at right angles to our destination, and rapidly getting beyond comfortable walking distance. On top of it, we’re in a section of town which is decidedly local. We opt to sit tight and go along for the tour ride through the neighborhoods of Nassau. I try to follow the bus’s progress as it weaves around, however, most of the streets we take are not labeled on my map. I’m amazed at our driver’s skill as he routes his bus down streets narrower than most alleys, and around impossibly tight corners. After a half hour or so, we end up down on Bay Street again, and this time I tell the driver to drop us off before he heads up Mackey Street and away from Bay Street. This works out fine, and a short walk later we’re back at the boat.

After lunch I wash off the dinghy and apply some UV protective stuff to the upper parts while Sandy runs a final check on her grocery list. She heads for the grocery store while I walk over to Radio Shack to see about an antenna for the sideband radio. I meet up with her in the grocery and we finish the shopping together. It’s now time to stow provisions on the boat, and square things away in anticipation of tomorrow’s departure for the Exumas.

It seems hard to believe that, after all our preparation and travel, we’re finally ready for our final crossing, the one which will put us in the Exumas. We’ve heard so much about this storied cruising area, and we’re eager to experience it for ourselves. They say that the crystal seas of the Abacos are almost murky in comparison with Exuma waters. They say there’s an island there which is inhabited by a unique species of land iguanas. They say that pigs roam one of the Exuma islands, and they’ll swim right out to your boat looking for a handout. They say an old DC3 from drug running days in the 1980’s sits out in an Exuma lagoon, now providing shade and habitat for reef fish. They say there’s an underwater cave there, where you can snorkel through a submarine passage and enter Thunderball cave, of James Bond fame. They say that in the marine park there, enormous lobsters, protected from harvest, roam the bottom. They say that snorkeling the coral reefs in the Exumas is like swimming in an aquarium. These things and more are said about the Exumas. That’s why we’ve come here, and why we can’t wait to finally arrive.