We took it easy today, enjoying the complimentary hot breakfast at the Quality Inn, then hitching the boat up and driving back into Hannibal around 9 am. We drove over to the Mark Twain Cave, which is located about 2 miles south of the historic downtown. A very attractive commercial campground is situated in the hollow just beyond the cave entry building, and both cave and campground are privately owned and operated. The guided cave tour takes about an hour, and we felt it was very worthwhile. This is the actual cave which young Sam Clemens and his pals explored, and a number of features inside the cave are recognizably tied to incidents described in The Adventures of Tom Sawyer. Also of interest are the literally thousands of inscriptions etched along the cave passages. Most go back many years, with the earliest dated 1820, just a year after the cave’s discovery. The typical technique was to blacken a portion of cave wall with carbon from a candle’s flame, and then scratch names and dates into the black. Such inscriptions look very fresh. In one remote cave passage, the famous outlaw Jesse James left his distinctive autograph on the cave wall. We were told that Mark Twain visited the cave as an old man and was highly offended with the extensive defacement which he observed. The distinction between graffiti and historically interesting inscription, it would seem, has a lot to do with how old they are.

The cave itself is quite different in structure and appearance from the stereotypical image of a limestone cave. Mark Twain’s cave lacks large chambers of any sort, and is almost devoid of classic limestone cave features such as stalactites and stalagmites. Instead, this cave has developed along a series of cracks or fissures in the limestone. These run in surprisingly straight lines, and connect with intersecting fissures at acute angles, resulting in a highly complex series of narrow passageways. It is very easy to see how a couple of young kids like Tom and Becky could become lost in this cave.

After concluding our cave tour we drove back into town, parked, and wandered over to Lulabelle’s for lunch. This establishment is situated on a side-street just off the main street, right next to the flood wall which protects Hannibal from Mississippi floods. Lulabelle’s was once a bordello, but is now a fine restaurant and B & B. The food and service were excellent, and capped off a most enjoyable visit to Mark Twain’s boyhood home along the Mississippi. 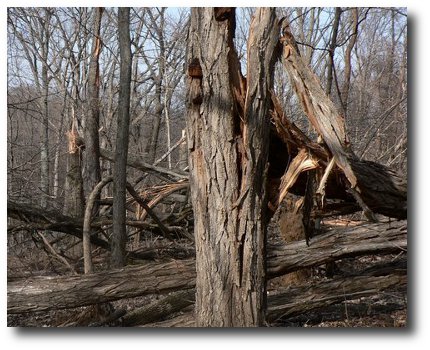 We then headed southeast on US 61 toward St. Louis. We had camped just outside St. Louis while returning from the Chesapeake in 2009, and a stop at this familiar campground seemed like a good idea. We used the navigator feature on our cell phone (newly activated for this trip), and “Mabel”, as I have named the female voice on VZ Navigator, guided us right to the Babler Memorial State Park entrance. We drove past a crew of park maintenance workers who were cutting fallen trees and skidding them up onto the park road. We stopped at the camp host’s RV, and were told that 2 weeks ago, this park had suffered a direct hit from a tornado. Dozens of mature trees had been uprooted, and the trunks of others had snapped in half. We are camped in a nice spot, in a loop which appears to have escaped significant damage. Not far away, however, the devastation was quite evident. We feel very fortunate to have missed this dramatic weather event as it happened. We will be pulling out in the morning with the knowledge that thunderstorms are forecast in this area tomorrow afternoon. We hope our route will keep us out of any severe weather.