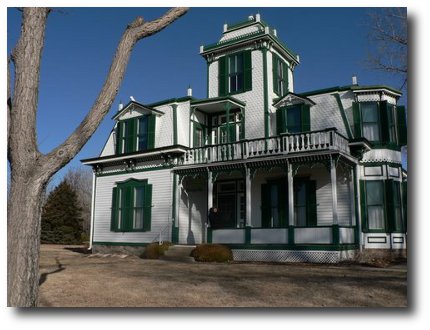 I got up at 6:30 am. The robins were making a lot of racket, but as cold as it was, I couldn’t imagine they were finding any worms. Sky was clear, and it was 20 degrees outside. We decided to drive across town to the Buffalo Bill Ranch State Park. We had intended on camping there, but when we phoned ahead, we learned it wouldn’t be open until March 21. We wanted to drive over and look the area over, and perhaps go for a morning walk through the grounds. We were able to park in the lot in front of Buffalo Bill’s house, which he called home during his Wild West Show period in the late 1800’s and early 1900’s. The house itself is highly embellished, in what the sign said was “Italian Ornate” style architecture. Beyond the house is a large red barn, which Buffalo Bill built to stable his horses. The barn features rafter tails under the eaves which are cut in the shape of a rifle stock, a tribute to Annie Oakley, one of his star Wild West Show performers. We enjoyed having the grounds to ourselves during our morning walk. It certainly looks like a place worth a return trip when the house, museum, and campground are open.

Our destination for the day was of modest distance, around 300 miles, following the Platte River and then cutting over to Lincoln and crossing the Missouri River into southwestern Iowa. As we cruised along, I tuned in the am radio and picked up a weather forecast: clear and cold for the day, but with a series of snow storms sweeping through the Great Plains over the next several days. We are fortunate to be crossing the region ahead of this weather, since they’re talking about potentially hazardous winter driving conditions by the middle of next week. And that’s not the only hazardous weather in the general neighborhood. According to the internet report I studied last night, all this frigid air is colliding with warm, moist air moving in from the Gulf of Mexico over Arkansas and southern Missouri, resulting in severe thunderstorms, damaging hail and possible tornadoes. Our route will keep us a good 300 miles north of these conditions. I guess being cold isn’t so bad after all. As long as the air stays chilly, we shouldn’t have any problems with hail or tornadoes.

I-80 between North Platte and Grand Island closely follows the Platte River, and during our drive along this route, we were entertained with one of North America’s greatest wildlife spectacles, namely the northerly spring waterfowl migration. We’re in the middle of the great Central Flyway, and I’m guessing the spring migration must be near its peak. Clouds of ducks, swirling masses of sand hill cranes, strings and vee’s of geese filled the sky. Corn stubble fields near the freeway looked gray in some places, but a closer look revealed that we were seeing dense masses of sandhill cranes. Some of the borrow pit ponds next to the freeway were solid white with snow geese. Some of the flocks we saw easily numbered in the thousands, if not tens of thousands of birds. It appears these birds use the Platte River area to pause, rest and feed during their migratory journey to nesting grounds further north. 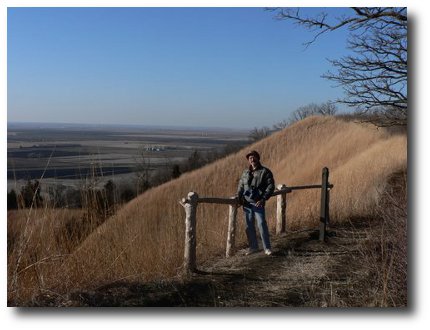 We headed for a lovely park in southwest Iowa, Waubonsie State Park, where we’d camped in the boat while on our trip to Chesapeake Bay in September 2009. We are camped there now, the only campers in the entire park. We went for a nice long walk along the ridge top trails which wind through oak woodlands and small remnant pockets of native Iowa prairie. This park is perched on a hilly ridge above the Missouri River. Overlooks along the trail provide impressive views westward, looking beyond the Missouri and out across the Nebraska plains. These hills were created by wind deposited dust called loess. We carried binoculars and a bird book, but we’re a bit early for most birds. We did see a pair of golden eagles, a brown creeper, one eastern bluebird, lots of robins and crows, and we think we heard a cardinal calling. And overhead, of course, we continued to marvel at the flights of white fronted geese, snow geese and sand hill cranes.