That tailwind more than did its job. Coupled with smooth roads, a gradual but steady downgrade, and a consistent driving speed of 65 mph, we made it all the way here to North Platte on a single tank of fuel. Granted, the “low fuel” light was on for the last 20 miles, but still, it was a remarkable run. I calculate that we got 16.5 mph for the day, which is the best I’ve ever recorded while towing the boat. I doubt I’ll see mileage that good for the rest of this trip. 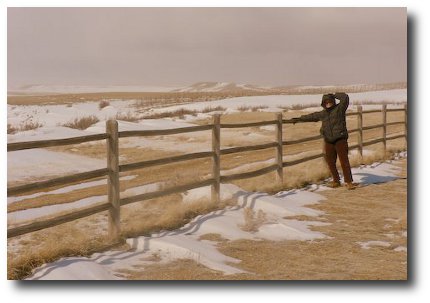 Temperatures were cold to frigid all day today, with mostly gray skies. These conditions made the drive across dreary southern Wyoming all the more boring. It’s apparent that energy is big business in this part of the country. We passed through places with names like Carbon County, and watched freight locomotives hauling uniform strings of coal cars several miles in length to plants like the Jim Bridger Power Plant, with its massive stack creating a huge plume of vapor. We skirted the town of Sinclair, whose oil refinery is apparently considered a historical landmark of sorts. The industrial structures there seem almost Gothic in appearance, and are reminiscent of one of those post apocalyptic science fiction movie sets. The scenery briefly improved between Rawlins and Cheyenne, where I-80 passes by the north edge of the Big Snowy Mountains, which certainly lived up to their name. The summit there is almost 9,000 feet above sea level, and the wind really howls through the area. I was almost tempted to set a sail. If I had, I’m sure I could have topped 20 mpg.

Today we crossed the continental divide, which along I-80 is just a small rise in the midst of a sagebrush covered desert, although the elevation is 7000 feet. Just east of Cheyenne we began our incremental descent, crossing the great plains in the valley of the Platte River. We were once again tracing in reverse the path of the historic Oregon Trail. North Platte, where we’re camped, is located where the North and South Platte Rivers join to become simply the Platte. Further east, the Platte was described by early pioneers as “being a mile wide and an inch deep”. Almost sounds like MacGregor waters.

After fueling the truck and checking in at the RV park, I unhitched for the first time since leaving home, and made a short shopping trip into town. Earlier in the trip I’d noticed I had a burned out headlight, and so picked up a pair. I had just enough daylight to pop them in.