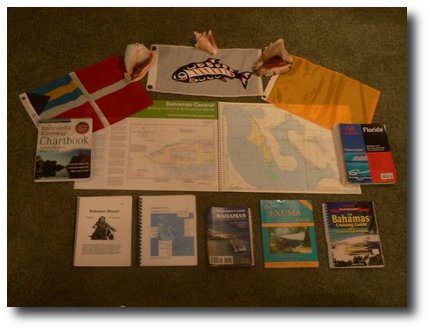 If the idea for a cruise is the seed, it will never bear fruit unless thought is given to best time to plant, optimum location, how to nourish. Planning for a major cruise often begins a full year before the actual trip. I thoroughly enjoy this process. It enables me to begin the cruise in my mind many months before the actual departure. We evaluate the boat, truck and trailer and consider which components and systems need maintenance, repair, upgrades or replacement. Cruising guides and chartbooks are selected and ordered, electronic charts are loaded into the laptop, various cruising routes are evaluated, and the start date and length of trip must be estimated. We favor spring as the most attractive season for cruising the Exumas. Possible dates are bookended by weather. Try to leave too early and we’re tempting late winter blizzard conditions on the cross country drive. Also, we know from experience that east coast northers do make their way out to the Bahamas in February and March, thus complicating Gulf Stream crossings and resulting in getting pinned down during extended norther blows. On the other end, hurricane season officially begins June 1. Heat and bugs also become more of a bother as summer sets in, so we plan on crossing back to Florida no later than the end of May. Water temperatures should be hitting the mid 70’s by late March and April. A final consideration, minor in comparison with weather factors, is the closing date for lobster season in the Bahamas, which happens to be March 31. I’d love to spend at least a few days in snorkel gear, pole spear in hand, hunting for these delicacies.

This thought process results in the following planned itinerary: begin the drive east on March 2; allow 9 days for the cross country drive, with several sightseeing stops along the way; arrive at our son’s home in Lexington Park MD on March 10 for an extended weekend visit and some long overdue grand-parenting time; pull out for Florida on March 15 (2 day drive); hook up with friends in Ft. Pierce FL, where we’ll do last minute provisioning and boat prep work; launch the boat on March 19 for a 3 day shakedown cruise down the Intracoastal Waterway, bound for No Name Harbor at the south end of Key Biscayne; allowing a couple of days for last minute provisioning/prep as well as weather delay if it’s blowing out of the north, we hope to make our Gulf Stream crossing to Bimini sometime around March 24; cross the Great Bahamas Banks to Chub Cay in the Berry Islands with a hoped for arrival of March 28 or thereabouts; exploring the Berries for a week, with lobster hunting on the agenda for our first few days there; cross over to Nassau somewhere around April 5 for several days of layover-sightseeing-provisioning; depart for the Exumas around April 8, allowing over 2 weeks to work our way down to the cruising center of Georgetown; spend several days in the Georgetown area before heading up to Eleuthra, possibly via Long Island and Cat Island; spend a layover week at Hatchet Bay on Eleuthra around mid May, so we can participate in a mission project with Bahamas Methodist Habitat at James Cistern; depart Eleuthra around the start of the third week in May for a week long cruise back to West End on Grand Bahama Island where we’ll pick our weather window for a crossing back to Florida (probable destination will be St. Lucie Inlet); short run back to Ft. Pierce and our awaiting truck and boat trailer, with a target date of May 27; pull and clean the boat, with about 10 days allowed for the drive home, making a few stops along the way to break up the trip; expected arrival home about June 7.

Of course, it goes without saying that all of the above is subject to change due to unforeseen circumstances such as mechanical breakdown during road trips, trouble with the boat, extended weather delays, health problems, or simply arriving somewhere we can’t bear to leave. The itinerary is fairly detailed and specific for a couple of reasons. First, I like to work these things out ahead of time, so I can properly pace the trip and try to allow adequate time for places of particular interest. It gives us a useful frame of reference when we’re going to be out for so long. Also, I just enjoy planning out such things. We’re able to imagine ourselves in various exotic places long before we actually pull out of the driveway.