Clear and cold outside, wind gusting to 30 knots; 384 miles traveled for the day; 935 miles total

We’re moored in the Rock Springs KOA for the night. Based on info from the AAA camping guide, this may be the only open campground along the entire length of I-80 this time of year. We’re the only ones here, so it’s not hard to understand why. When I went into the office to register, the lady asked what type of camping vehicle we were staying in. I replied “sailboat”. She didn’t believe me, and I had to persuade her to look out the window. I guess they don’t get many MacGregors checking in around here.

It’s in the low 20’s outside, and the wind has really kicked up. If I didn’t know better, I’d think we were at anchor in some harbor, from the way the boat is bouncing around in the wind. If it blows any harder outside, I may be tempted to set my anchor. We’ve got an electric heater as well as the Wallas heater going, and the temp in the cabin is up to 70 degrees. It will get into the teens outside, and we’ll run the electric heater all night, so we should stay nice and cozy.

We took our time getting started this morning, and weren’t on the road until 9:30. It rained most of last night, and was still raining when we hit I-84. Rain turned to snow as we angled southeast toward the Utah border. It snowed hard for a while, but wasn’t sticking to the roadway. We stayed with I-84 down to Ogden UT and then eastward through the canyon to the junction with I-80 in occasionally rainy conditions. 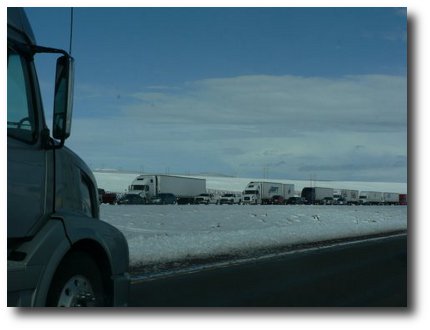 We stopped at a rest area a few miles shy of Evanston WY, and I talked with a trucker who said he’d heard that the eastbound interstate was closed about 20 miles east of the rest area. He’d gotten the report on his CB radio from a westbound trucker. The sun was poking out at that point, and I couldn’t imagine a closure due to weather problems. Perhaps an accident, I thought. We pushed on, and made it to Evanston just fine. Lots of fresh snow in the area, but none on the road. A few miles east of Evanston, however, we crested a hill and saw traffic starting to slow and back up. It was moving however, and we were able to continue on. The semis were bumper to bumper ahead, but all moving. I noticed plows clearing slush off the westbound lanes and a couple of miles further on, saw traffic on the other side of the freeway completely stopped. They must have shut the westerly lanes down while the plows worked. The instantaneous traffic jam was incredible. We cruised past at least 15 miles of vehicles, 90 percent big rigs, completely stopped. Some of the truckers had their hoods tipped up, checking oil or whatever. We must have come along just after the eastbound traffic got moving. I’m sure glad we didn’t get caught up in the mess we were seeing on our left.

We got in to the KOA around 4 pm, and went to go for a walk up into the foothills. It felt great to stretch the legs, and I had just enough time after getting back to barbque some steaks at the picnic table. We’ll try to get started a little earlier tomorrow morning, since we plan on driving about 100 miles further than today. Hopefully, it won’t be quite so cold down along the South Platte River in Nebraska, where we intend to camp next.